Taking inspiration from the brand’s cruise collection, the Japanese artist has created a manga that will be shown in more than 70 of the company’s stores. 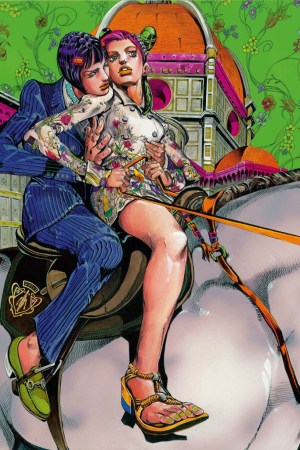 Taking inspiration from the brand’s cruise collection by Gucci creative director Frida Giannini, Araki has created a manga, called “Jolyne, Fly High With Gucci,” which will be shown in more than 70 of the company’s stores around the world from today to mid-February.

The manga, revolving around the story of student Jolyne Cujoh who inherits a vintage keepsake from her mother’s Gucci collection, features 3-D effects and shows a number of symbolic references to the brand’s signature Flora pattern.

“This has without doubt been one of the most enjoyable collaborations I have worked on,” Giannini said. “The characters that Hirohiko has conceived combine an energy, sensuality and appeal that brings my cruise collection to life in such a fun and compelling way. I am quite sure his window installations will stop people in their tracks in cities around the world as they immerse themselves in the fabulous fantasy world he has created.”

“Frida’s beautiful cruise collection with its strong colors and graphic designs set my mind racing the moment she showed it to me,” said Araki. “From there, the characters and story line came into being so naturally. It was very stimulating to work together on this project.”

The full version of the manga will run exclusively in Japanese Spur Magazine and will also be available on Gucci’s Facebook page.