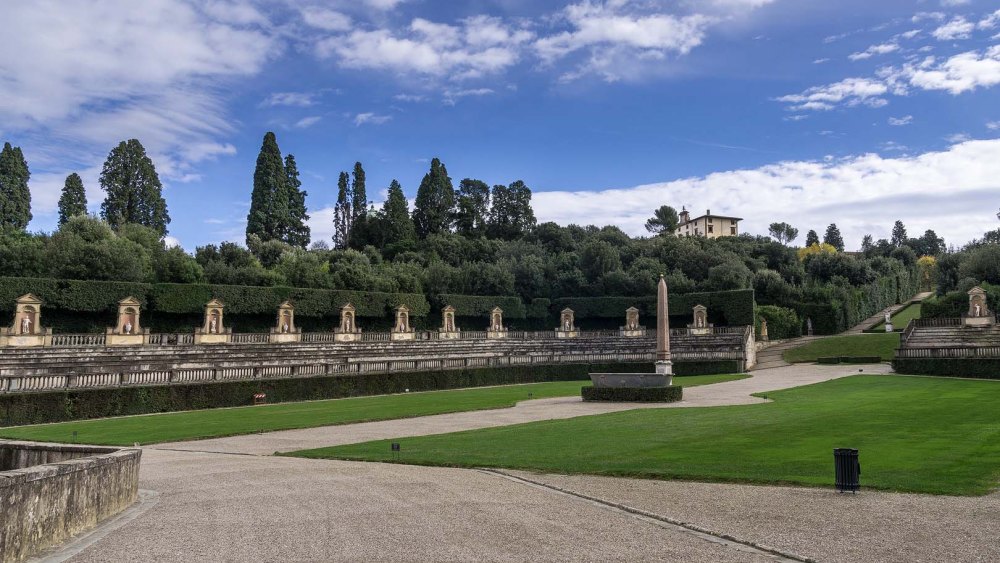 FLORENCE — “Alessandro Michele is the Michelangelo of fashion today.”

So proclaimed the mayor of Florence, Dario Nardella, on Tuesday. “We are amazed at his ability to surprise, he’s broken out of predefined schemes, imposing his own and then breaking them himself. And this while also bringing economic success to Gucci.”

Nardella was all smiles, with good reason. Gucci’s creative director has decided to stage the brand’s cruise show in Florence on May 29 and the event is expected to raise the city’s glamour quotient and bring it additional international attention. Also, Gucci’s president and chief executive officer Marco Bizzarri revealed the company’s donation of two million euros, or $2.1 million at current exchange rate, to support the  restoration of Florence’s Boboli Gardens. The show will be held at the Palatina Gallery at Pitti Palace, which overlooks the gardens. This is the first time a fashion show will be held there.

The event is part of a cultural project with the Uffizi Gallery and the city of Florence, and the donation will be given over three years. For the use of the Palatina Gallery, Gucci will spend another 200,000 euros, or $213,344.

“Florence is an unquestionable point of reference for Gucci and Alessandro,” Bizzarri said. “Boboli is the Italian Versailles and we want to make the gardens even more important. I read that almost one million people visited Boboli last year, and we want to bring strong improvements to the gardens.”

A sculpture by Donatello of Judith beheading Holofernes stands in the stunning Hall of Lilies at Palazzo Vecchio, the city’s town hall, where the press conference to present the project was held. Nardella also took the opportunity to compare Gucci to Judith, a symbol of freedom, virtue and victory of the weak over the strong in a just cause, as well as a reference to the Medici family protecting  the city of Florence.

“Gucci goes against the tide, against stereotypes, the dictatorship of standardization and the mass market,” remarked Nardella. “Florence, too, is never banal, indicating models of new styles, and surprising the world like Botticelli.” The mayor also underscored how Gucci “is part of the history of Florence.”

Bizzarri emphasized Gucci’s roots in Florence and its ties to local artisans. “We have 1,300 employees in Casellina [di Scandicci, outside Florence and Gucci’s manufacturing plant] and we plan to hire even more people,” the executive said. “These are artisans without whom Alessandro’s creativity would be useless, only in collaboration with them there is substance and material. Here there is added value, and generations of workers that follow one another. This would not be repeatable elsewhere.” He also gave a shout-out to the “institutions we worked with, which see what is possible, not what is impossible.”

Bizzarri noted how Michele is “constantly inspired by the city’s Renaissance masterpieces.” The Palatina Gallery includes major works of art by Titian, Raphael, Rubens, Caravaggio and Velazquez that were first collected by the Medici family. The show is expected to accommodate between 300 and 380 guests. He emphasized the relevance of cruise collections for Gucci and how Michele’s first cruise show in New York “established his stature” internationally.

The project, called “Primavera di Boboli,” or “Spring in the Boboli Gardens,” is under the patronage of the Ministry of Cultural Heritage, Activities and Tourism, with funding from the Municipality of Florence, in a partnership with the Uffizi Gallery. Eike Schmidt, director of the Uffizi, gifted Bizzarri with a fruit, which is a blend of a lemon and an orange that dates back to the Medici and is called “Bizzarria,” which elicited a big smile from the executive. Schmidt underscored the Boboli’s “unique botanical patrimony and collection of citrus fruits and plants from all over the world.” The 33 hectares of the  gardens encompass sculptures, architecture, landscaping and plants dating back to the late 16th century, in a unique ecosystem. But some parts of the gardens were no longer accessible after 40 years of neglect.

As Schmidt said “Florence Is Italy’s Athens,” a question was addressed to Bizzarri following reports of the Greek city refusing permission to stage a Gucci show. “Athens was a romantic option, but we were also looking at Florence,” the ceo said. “We study options in parallel, you never know what the obstacles can be. I guess the Greeks’ finances are more solid than that of the Italians, and that they don’t need support,” he quipped.

In February, following media reports that Greek authorities had denied Gucci permission to stage a runway show at the Parthenon, the Italian luxury group said it had explored with Greek authorities the possibility “of a long-term cultural collaboration,” but strongly denied reports of offering a sum of 56 million euros, or $59.3 million at current exchange, or that of two million euros, or $2.1 million, to restore the Athenian Acropolis in exchange for permission to hold a runway show in front of the Parthenon.

In recent years Gucci has established cultural collaborations with Palazzo Strozzi in Florence, the Minsheng Art Museum in Shanghai, Chatsworth House in England and LACMA in Los Angeles. Last year, the brand unveiled its cruise 2017 pre-collection with a runway show held in the Cloisters of London’s Westminster Abbey. That was the first time the prestigious location hosted a fashion show.

Michele acknowledged that he thought he was dreaming when he considered Westminster Abbey as the venue.

The previous year, Michele showed his cruise 2016 collection in New York, and Bizzarri said the messaging around these special shows has been key — especially for the end-consumer.