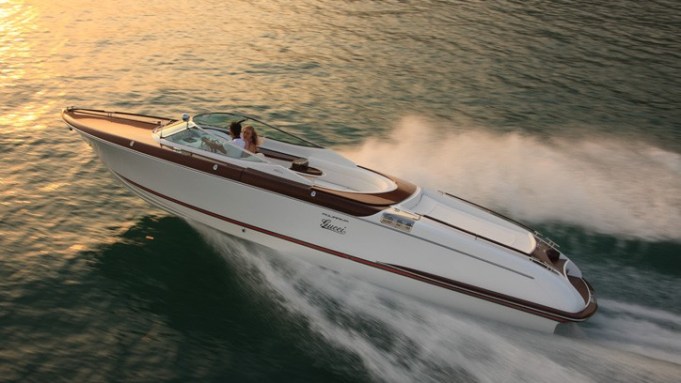 Gucci has hit the water.

The Italian luxury fashion house and boat maker Riva on Tuesday unveiled the made-to-order Aquariva by Gucci speedboat at the Cannes, France, boat show. And since this is luxury at all levels, the boat doesn’t come cheap: $750,000 each. Gucci chief executive officer Patrizio di Marco said three clients already have expressed serious interest.

According to di Marco, the two companies and two distinct symbols of La Dolce Vita share identical values when it comes to representing Made in Italy design, craftsmanship and quality. “There was the desire to work with a company that shared our core values and we hope that the return of this project will be to further strengthen the idea of Gucci as a lifestyle brand,” said di Marco.

Frida Giannini, who views a Riva boat as one of the “most evocative images of Italian style, sophistication and elegance,” chose the Guccissima print for the seats and sundeck and the classic green-red-green logo to pipe the boat.

The two-speed electronic gear speedboat runs on a 380-horsepower Yanmar engine and has a fiberglass hull, trademark mahogany interiors and a 20-coat glossy white paint that can be customized.

To provide that extra marine touch, Giannini designed a Riva by Gucci accessories collection comprising duffel bags, towels and flip-flops made from soft white leather and enriched with the green-and-red ribbon. They are now available in Gucci’s Milan and Cannes stores and will roll out to other Gucci outposts and select nautical stores next year.

The Aquariva by Gucci boat also will be presented on Sept. 22 in Milan during fashion week.

Di Marco conceded that next year’s celebrations are aimed at consolidating the various initiatives embraced over the last 18 months, such as the Gucci Masters equestrian tournament, the new museum and Gucci’s involvement in restoring old films. He also hinted at a new collaboration, without elaborating.