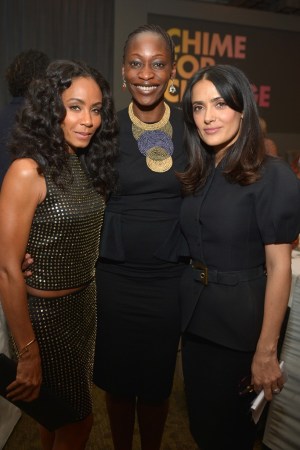 Gucci and TEDxWomen hosted a lunch salon during the annual TED Conference in Long Beach, Calif., that served as the official kickoff for the company’s new Chime for Change foundation to further women’s education, health care and justice through social media platforms Facebook and Catapult.

This story first appeared in the March 1, 2013 issue of WWD. Subscribe Today.

Dovetailing with the women’s empowerment theme, guests were treated to an extended trailer of the short film “The Supreme Price,” a documentary by Joanna Lipper about her friend, Nigerian activist Hafsat Abiola. The film was the recipient of the Gucci Tribeca Documentary Fund’s Spotlighting Women Documentary Award and will premiere at film festivals and in theaters this year before running on PBS.

The event was hosted by Pat Mitchell and Salma Hayek Pinault, a cofounder of Chime for Change along with Frida Giannini and Beyoncé Knowles. “Not to be disrespectful to my fellow actors, but so many are using their fame to bring ‘awareness.’ But it’s time to actually do something,” said Hayek Pinault to the room, which included Jada Pinkett Smith, Jodie Foster, Guy Oseary, producer Jesse Dylan, Desirée Rogers, Annie Philbin, One Kings Lane founder Ali Pincus, One Campaign founder Jamie Drummond and David Carey.

“They drop that bomb in your lap and then go on to bring awareness to their next film. But there are no innocent bystanders in the information age. We need to use the tools available to us today to turn awareness into action,” she said, referring to Catapult and how it enables users to find charities and projects to donate their money and skills to, and the way Facebook enables people to start movements in the virtual world that can transform into tangible events. “Everyone get on their smartphone and like Chime for Change on Facebook. This is a pretty popular room, and I know Guy Oseary must have like 10,000 friends and Jodie Foster must have 50 million Twitter followers.”

The campaign will utilize a film platform, executive produced by Hayek Pinault, which comprises 10 shorts, the first being “The Supreme Price,” to set the narrative for its initiatives. Mariane Pearl will be managing editor of the campaign’s journalism platform, curating stories from around the world. There will be a major concert this summer, about which details are still under wraps.

Afterward, Foster said, “That was inspiring. I need to go lie on my bed and think about it all.” Pinkett Smith, who has been a vocal activist against the trafficking of women, told Hayek Pinault, “We’re chiming. This is a great day because an extension of the Trafficking Victims Protection Act and the Violence Against Women Act passed today in Congress so it shows that our hard work pays off.” “I’m inspired by you both,” Abiola told them. “I knew you could do a lot because you memorize all those movie lines, but this is amazing.” “Please, we are thankful to have someone like you here,” Hayek Pinault told her. “We’re tiny, but don’t let that fool you.”