Frida Giannini, one of the first designers to fashion a silver-etched iPod case, has now turned her focus to the iPad.

By Alessandra Ilari and Joelle Diderich on June 7, 2010
View Slideshow 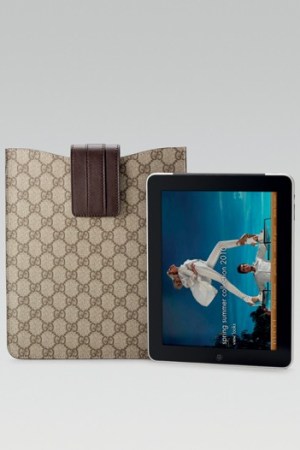 MILAN — Frida Giannini, one of the first designers to fashion a silver-etched iPod case, has now turned her focus to the iPad.

The exclusive cover-up combines craftsmanship with technical materials and is available in black rubberized Guccissima leather and double-G-logoed neoprene, both featuring the iconic green-red-green web detail. More versions will bow in October, while special editions to celebrate important occasions are also in the pipeline. For example, there will be a poppy red Guccissima patent leather style for Saint Valentine’s Day, silver Guccissima leather for the holiday season and a diamanté-patterned version exclusively available at gucci.com.

Each case has a strap closure to preserve the touch screen and is lined with suede for further protection. Priced at $230, the case will be available starting in mid-June in Gucci’s flagship stores in Rome, Milan, Paris, London and New York.

Elsewhere, Gucci Group must slash its transport-related emissions of carbon dioxide by 20 percent in the next 10 years, and Puma is expected to switch to 100 percent sustainable packaging by 2015, according to the first targets published by parent group PPR as part of its corporate social responsibility (CSR) drive.

The company has set out seven targets for each of its five divisions, which also include books and electronics retailer Fnac, furniture chain Conforama and mail-order division Redcats. They cover issues such as staff training, environmental impact and solidarity programs.

PPR chairman and chief executive officer François-Henri Pinault revealed that a portion of key executives’ salaries was tied to achieving these objectives, adding the targets were also factored into the five-year development plans and the budgets of each division.

“I can’t imagine running a company like PPR without a commitment to corporate responsibility,” he said of the CSR department, launched in 2007.

Gucci Group, whose brands include Gucci, Balenciaga, Bottega Veneta and Alexander McQueen, will also have to ensure that by the end of 2010 it uses only paper certified by the Forest Stewardship Council (FSC) — including shopping bags.

Pinault said customers were highly sensitive to issues linked to sustainable development but were not prepared to pay extra for these initiatives. “If we wait for customers to make sustainable development a condition for purchasing, then nothing will happen,” he added. “It’s as if green products were somehow not normal. They are normal, it is the other products that are not normal. It’s up to us to work out how to make green products the new normal.”

PPR estimates it emitted 452,492 tons of carbon dioxide in 2009, of which transport accounted for 58 percent and energy emissions 42 percent.