MILAN — Gucci is going off the grid — and turning to a number of talents, including Jane Fonda, to communicate a new sustainable project.

The Italian luxury company will launch on Monday a collection that employs recycled, organic, bio-based and sustainably sourced materials, including the trademarked Econyl, a regenerated nylon made from nylon offcuts and pre- and post-consumer waste, such as abandoned fishing nets and carpets — transforming plastics that harm marine life and old materials that will likely end up in landfills into a new high-quality thread.

Called Off the Grid, this is the first collection by creative director Alessandro Michele as part of the Gucci Circular Lines, an initiative created to support the company’s circular production.

The collection, which comprises genderless luggage, accessories, footwear and ready-to-wear, “is the result of teamwork; everybody brought something to it,” Michele said. “And in the campaign, too, there is this idea of dialogue among people building something new. I imagined that we could build a treehouse in a city center, all together, like kids playing in the park. Because all of us need to build this house or to find out that our planet exists, even where it seems it’s not there, or it’s far away.”

They are portrayed in a rustic treehouse, which is juxtaposed to modern towering concrete and glass buildings in Los Angeles. “The striking contrast between the small-scale, crudely assembled wooden structure, with its greenery and unfinished planks, and the slick, soaring skyscrapers that dwarf it, makes for whimsical images where our metropolitan explorers look like they are making a modest stand for the future of humankind,” stated Gucci. “The treehouse and the simple way of life it represents becomes a powerful metaphor for the desire to escape conventional life and enjoy the experience of living more Off the Grid,” said Gucci, noting that the photographs were taken before the Black Lives Matter protests.

Even more acute today in the wake of the coronavirus pandemic and the lockdown in countries around the world, Gucci said “human beings crave a connection with the outside world and are rightly fascinated by the power and majesty of nature, and highly value the joy there is in being able to live in a natural environment.”

Here is what they told WWD about protecting the environment and accountability:

“Unanimously climate scientists are telling us we must cut our fossil fuel emissions by half by 2030, that’s in 10 years. And then gradually phase out of fossil fuels altogether by 2050. While ensuring that the workers in communities that have depended on fossil fuels for their livelihoods are trained for and given family supporting jobs and benefits. We start by talking to our families, our friends, our colleagues about the climate crisis. Learn more about the climate crisis and talk about it. If you don’t talk about it, why would you care? And if you don’t care, why would you ever act? Then join organizations that are working to stop global warming.” 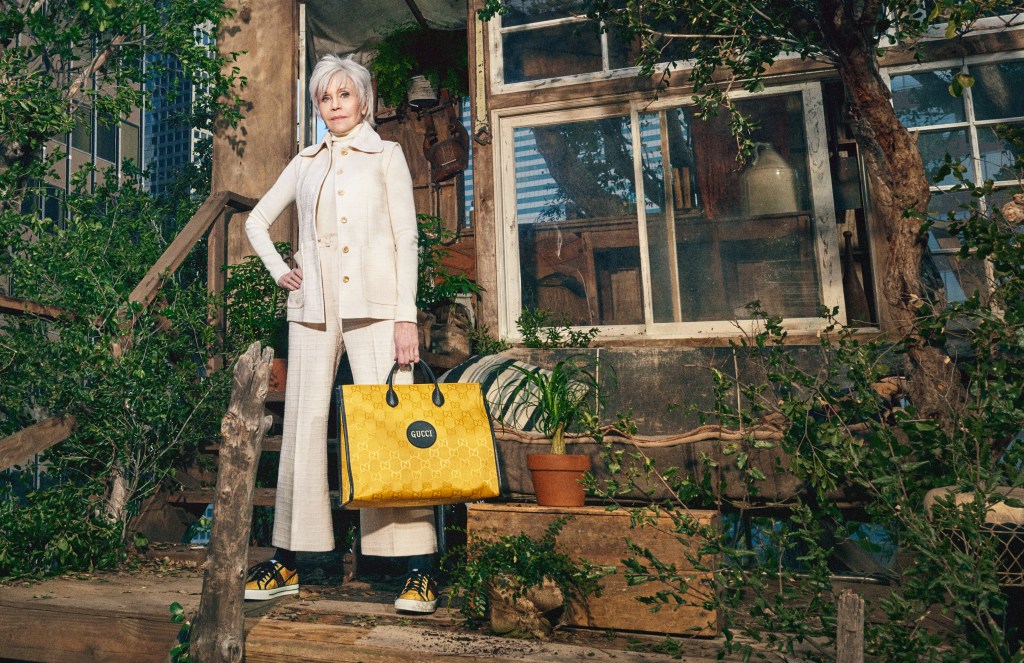 “As far as environmental education, I believe our education system, as a whole, fails to provide adequate information to kids about what is actually happening to our planet. And, I guess, that leaves people with some sort of platform to encourage this type of learning. I think that Greta Thunberg is a great example of someone who is both entered the media as a teacher and as an icon. She’s extremely important to furthering the conversation. We must hoist up people who are spitting facts about global warming. I know that I’m trying to be a better student and actually listen, take initiative from leaders like Greta.” 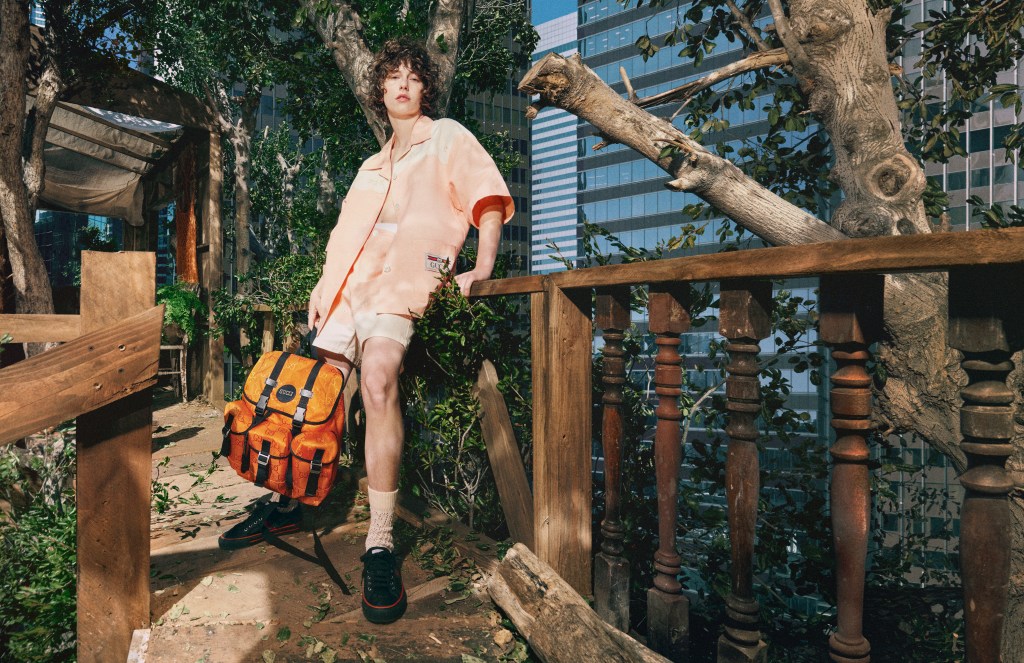 “We should maybe look a little bit more aggressively at what is needed to be done, to support a more sustainable future and maybe expedite that pathway and that transition and with that comes, the creation of jobs, comes the creation of resilience, comes to creation of a more, hopefully, robust and healthier relationship with the natural world. And in turn, supports our ability to live on planet Earth, or spaceship Earth I should say.” 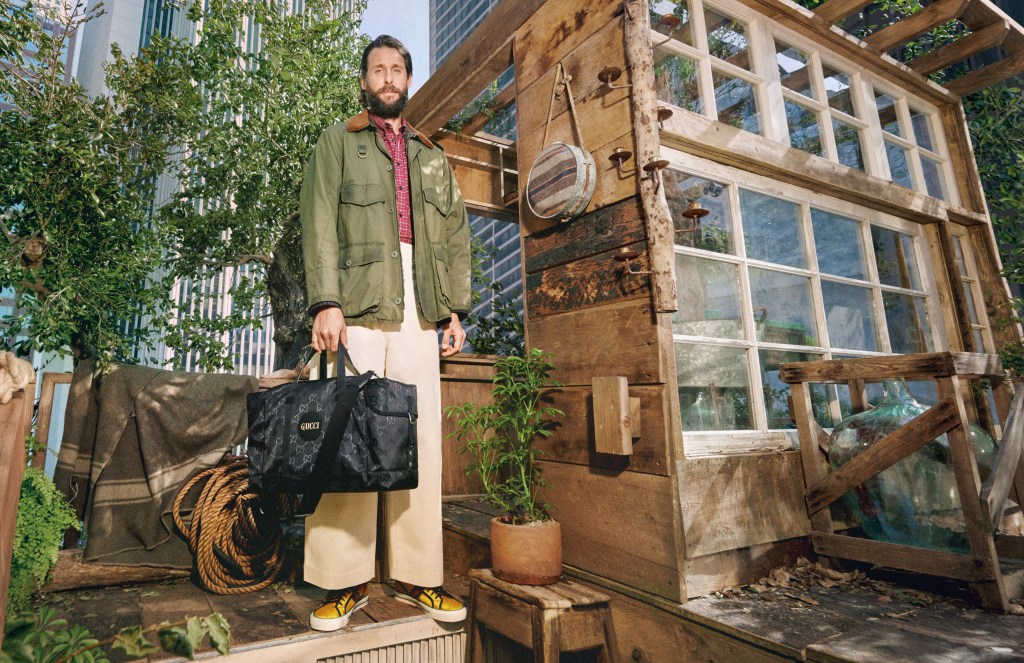 “Now I’m an ambassador for the refugee agency, UNHCR, but I play the guitar, and with the guitar, I just realized I can spread the messages or positive vibes to more people. And even people who don’t listen to our speech or whatever, they might listen to our music if the music is cool. So that’s the reason why I became an activist.

“Also I am responsible as an artist. Once you put out your voice to the world with their creation, it’s responsible because people listen to it or people feel it. It might changes somebody’s life, which means even if we can’t change the world right now, we might be able to change people in a good way and then we can head out to the right path. That’s now what I believe as an artist and also an activist.” 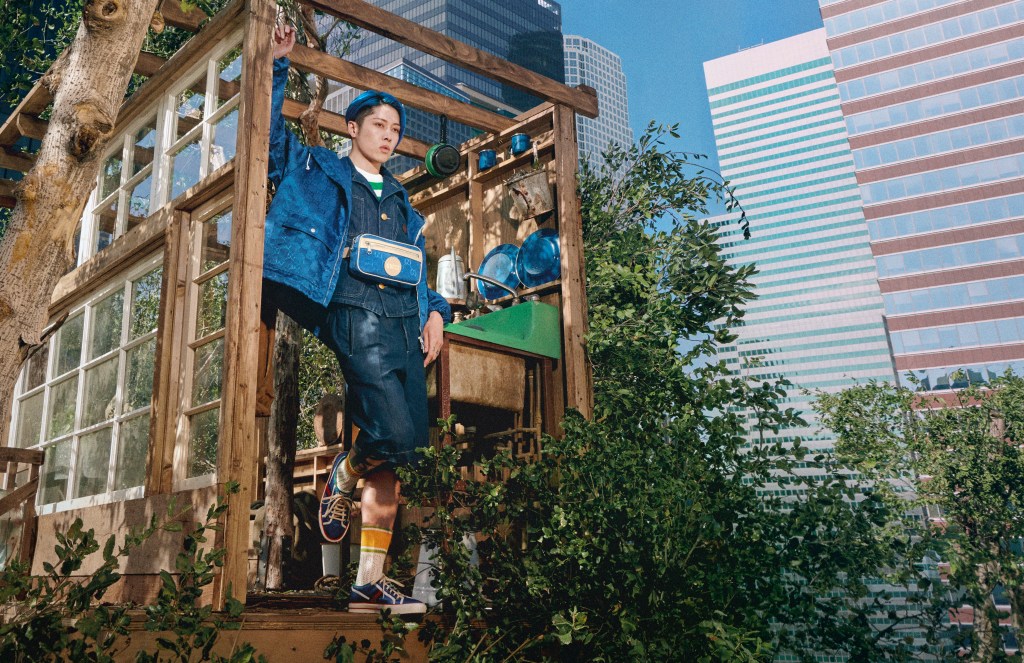 A special section on the Gucci app will allow users to challenge themselves to a themed quiz, responding to questions about the collection and its circular production process. Taking inspiration from the campaign’s concept, players can build their own city treehouse virtually by correctly answering questions.

Gucci was the first luxury brand to use Econyl threads in its products, beginning in 2016. Other components of Gucci Off the Grid are made from recycled materials and more sustainable alternatives such as metal-free tanned leather, recycled polyester thread and linings, recycled brass, recycled gold and palladium hardware coating, and solvent-free adhesives.

To support a continued cycle, the Econyl offcuts are recovered from Gucci Off the Grid’s manufacturing and then recycled to create new Econyl materials.

As reported, the Italian luxury company is launching digital platforms to unify the voice of its community, refreshing its Equilibrium web site, created two years ago, and has unveiled a new dedicated Instagram profile.

Gucci has also revealed it has reduced its environmental impact year-over-year by 21 percent, releasing its 2019 Environmental Profit and Loss statement.

As part of Gucci’s 10-year Culture of Purpose strategy, spanning 2015 to 2025, the company plans to reduce its total environmental impact by 40 percent within its direct operations and across the entire supply chain. It has also pledged to reduce by 50 percent its greenhouse gas emissions by 2025.

Gucci is ahead of schedule and already close to achieving its 2025 targets, as its results for 2019 reveal a 39 percent reduction for the house’s combined impacts and a 37 percent decrease in GHG emissions alone.