The collection will first bow in China at the end of the year.

A photo from the Gucci The North Face ad campaign

MILAN — In a confluence of geographic and temporal references, the North Face x Gucci collection celebrates the histories and heritage of both brands.

After three months, the two companies are unveiling the results of their collaboration, which was first teased in September.

To promote the new partnership, Gucci’s creative director Alessandro Michele conceived a campaign shot by Daniel Shea and set in the Alps, debuting on Dec. 22.

In stills and video, as well as through content created for TikTok, the images portray a group of hikers camping by lakes and enjoying an outdoors vacation. The photos have the quality of retro holiday snaps, with a Seventies mood.

The North Face was founded in 1966 in San Francisco, and the atmosphere of the campaign reflects the period when the company began its development from an outdoor retailer based in Berkeley, Calif., and shared a factory and storefront adjacent to Credence Clearwater Revival’s practice studio. The group’s iconic song “Bad Moon Rising,” written by John Fogerty, serves as the soundtrack throughout the video campaign.

The collection for men and women comprises ready-to-wear, soft accessories, luggage and shoes, but also tents and sleeping bags — a reference to the outdoors expertise of The North Face.

The rtw collection features not only goose-feather down padded coats, bombers and vests but also shirts, skirts and jumpsuits.

Outerwear and equipment are based on original designs from The North Face in the Seventies. 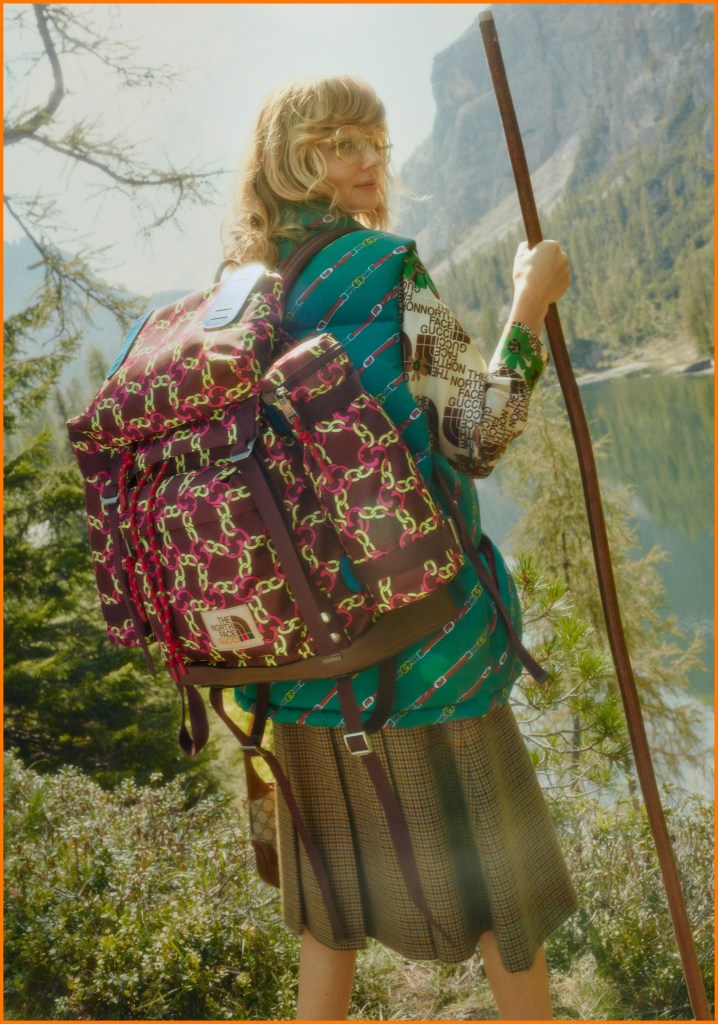 There are several colorful floral prints created in partnership with The North Face and some bear a new The North Face x Gucci logo. This combined logo featuring The North Face’s three curved lines and Gucci’s signature green-red-green Web stripe is also displayed on a dedicated label.

There are eight new graphic patterns on the luggage, ranging from backpacks to belt bags.

The shoe is a gender-neutral hiking boot with a chunky and sturdy Goodyear-welted sole in three colors of leather — brown, black and cream. 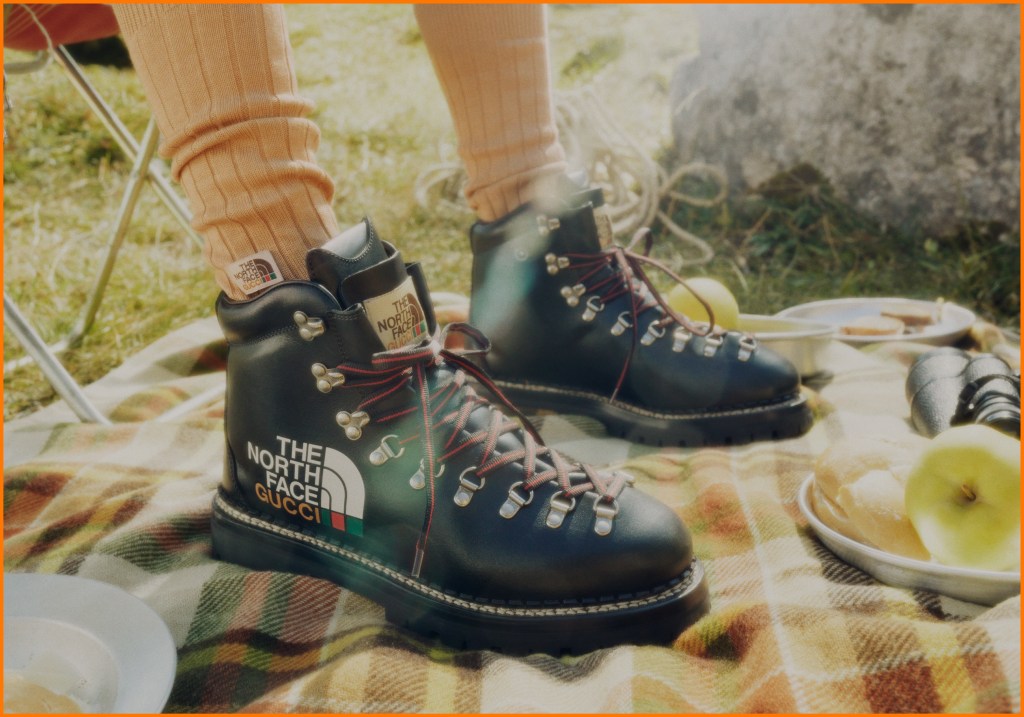 The North Face x Gucci Collection is in line with the commitment of both brands to sustainability.

Luggage contains Econyl, a nylon fabric sourced from regenerated materials such as fish nets, carpets and other scraps.

The color palette was inspired by the Seventies and curated from The North Face materials library. Archival fabrics have been partially incorporated into the collection to give them a new life.

Packaging for the pieces comes in vibrant pink featuring The North Face x Gucci logo. The garment and carrier bags, boxes and pouches were designed to reduce the environmental impact. All paper and cardboard come from sustainably managed forest sources and an uncoated paper is fully recyclable. To reduce the amount of paper, boxes are equipped with handles to avoid using shopping bags. Larger items come in shopping bags and cotton covers without boxes.

The collection is expected to debut in a Gucci Pin pop-up store in Beijing on Dec. 29 and will then be rolled out in the rest of China. It will be available to other countries in the world in January. In the Gucci Pins, the special bright floral patterns of the range will be used to dress the spaces and take over the façades.

A limited selection of The North Face x Gucci pieces will also be available on gucci.com, with some online exclusives.

“It is a well acknowledged notion that travel leads to self-discovery, and in this conviction The North Face is aligned with Gucci, which similarly empowers people in their quest to celebrate and express their own characters and personalities, embedding Alessandro Michele’s approach toward fashion as a powerful instrument of freedom,” the company said.

This is the first time Gucci has worked on what could be a full-fledged collection with another brand since Michele’s arrival as creative director five years ago, although Gucci has teamed for collaborations with the likes of Liberty and Ken Scott, for example.

The North Face has been branching out beyond its signature Mountain jacket.

Over the last decade, the Denver-based outerwear label has expanded its reach from serious mountain explorers to fashion connoisseurs via partnerships with brands including Supreme, Junya Watanabe and Sacai. For its return to London Fashion Week, MM6 Maison Margiela in February unveiled a collaboration with The North Face based on its signature Expedition System pieces designed for extreme weather conditions.

The North Face is controlled by parent company, VF Corp. 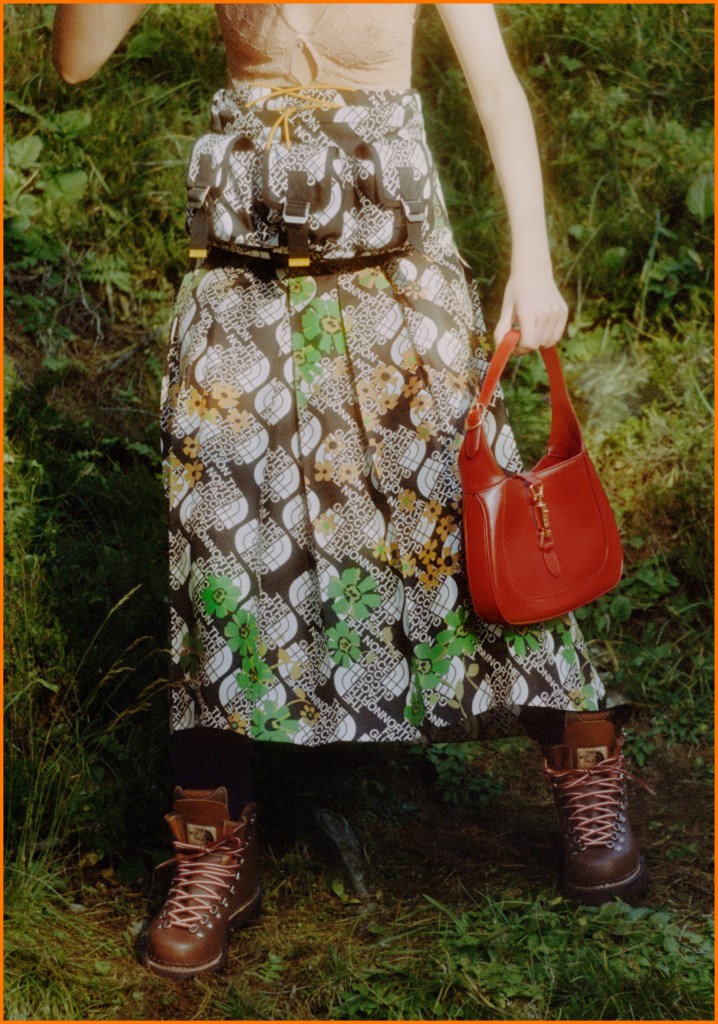 An image from the campaign  courtesy image