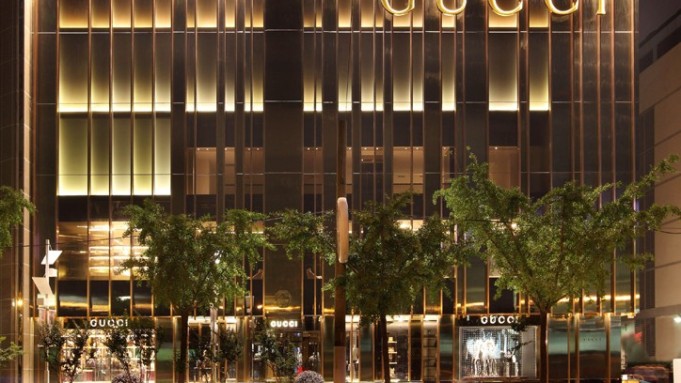 The store, covering more than 17,000 square feet, is located on a prominent corner of the Golden Eagle International Shopping Square, next door to luxury shopping landmark Plaza 66. It is Gucci’s 28th directly operated store in Mainland China.

The Shanghai store features the brand’s most recent design concept, which has already been rolled out to boutiques in New York, Rome, Munich, Hong Kong and London. Architectural elements of the new Shanghai flagship include a large glass facade and interiors crafted of rosewood, marble, ribbed glass, bronze and polished rose gold.

“The principal goal of the new concept was to bring light into the interiors of our stores,” Giannini said. “Each city has its own specifications and unique flavor, but they all retain a heightened sense of luxury and intimacy. For Shanghai, I wanted to blend a modern architectural statement that fits with the contemporary feeling of the city, but also keep it firmly tied to iconic materials and elements from Gucci’s heritage.”

Giannini is the first female ever to be bestowed with the award. “It’s a good sign of energy for the next generation — for the women and girls who are approaching this kind of work, because it’s a very challenging job,” she said.

She added the award had special meaning because the voting committee is entirely comprised of Japanese people, who are notoriously discerning when it comes to fashion. “Winning an award like this, it means that Japan is looking at us and looking at what we are doing. And they think that what we are doing is something that is about quality and about craftsmanship,” Giannini said.

Before arriving in Tokyo, Giannini visited the Kyoto workshops of traditional artisans, such as kimono and obi weavers. She and di Marco will go to Beijing next to meet fashion editors at a dinner sponsored by Vogue China before making their way to Shanghai to host the opening party for the brand’s new flagship on Saturday night.