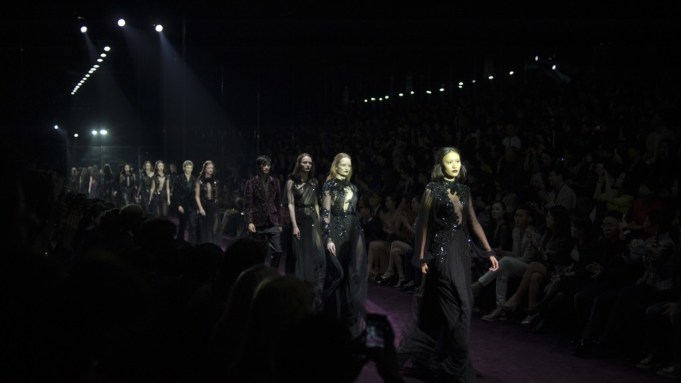 SHANGHAI — Gucci faces a complex situation in China, where it has been present for nearly two decades, in recent years has expanded rapidly and, partly because of that, has come to symbolize different things to a diverse set of consumers here.

According to a Bain & Co. Chinese luxury survey, Gucci was the third most desired luxury label in the country behind Louis Vuitton and Chanel in 2011. But Patrizio di Marco, Gucci’s president and chief executive officer, said the brand’s positioning in the market needs some fine-tuning.

“What is the memory of Gucci now [in China] in the past few years is a brand that is commercially successful because it opened stores. The perception is very likely the fact that we are logo based, this kind of stuff, so we definitely have to fine-tune and fix things because the brand position as I intend it to be has not been conveyed for a number of faults that I would say are related pretty much to the incredibly fast pace of our development in the country,” di Marco said in an interview ahead of a string of events taking place over the weekend, including a runway show of the house’s fall collection and a performance by Bryan Ferry. Hilary Swank and a number of Chinese celebrities attended the festivities, including Chinese actress Li Bingbing, the face of the brand’s latest ad campaign.

Gucci opened two stores in Beijing and Shanghai when it entered China in 1996. Until the end of 2004, it only had four stores in the country. As of December 2011, the brand had 46 stores in 32 cities on the Mainland and 58 stores in Greater China. This year, there are plans to open around 10 more locations, di Marco said.

He stressed that the brand has carefully studied every location for openings and has worked to make sure the product mix in its stores is appropriate to the target customers living nearby. But he also admitted that the brand has failed to tell a strong story to Chinese consumers, particularly to the country’s quickly evolving set of shoppers who are increasingly seeking more sophisticated, understated luxury products rather than logo-driven designs.

“That [consistency] is probably what we lacked a bit over these past few years because we ran so fast,” di Marco said. “When you have to change the course and reintroduce elements which are yours, like part of your DNA, like stressing craftsmanship, heritage, things that Gucci never spoke about in the past I would say 20 years, and still be successful, it is complicated.”

The executive seemed less concerned about early indications of slowing demand for luxury products in China. In 2011, Greater China comprised 22.6 percent of Gucci’s 3.14 billion euros, or $4.14 billion at current exchange, in revenue.

Di Marco said the event and the presence of creative director Frida Giannini were aimed at educating the Chinese about the brand’s legacy and how, under Giannini, Gucci is moving away from its Tom Ford era of overt sex and glamour to a new one of sophistication, class and femininity.

Giannini, for her part, said she sees those qualities in the women here.

“Honestly, I don’t see that Chinese girls, they want to be oversexed, that they want to be in leather,” she said. “They want to be part of a lifestyle that I think Gucci is, so this is my intention to invite people to enjoy the experience of the Gucci world instead of just selling a pair of stiletto heels with black patent leather or other very aggressive things. I would prefer that someone comes into our store to buy something of a very high quality, a very high design that they can keep in the wardrobe for the next 10 years.”

The designer echoed di Marco’s sentiment on the importance of moving beyond the double G logo. “I am fighting a lot for this recognizability that is not only through the logo or through the canvas or through the cheaper products,” she said. “That [Gucci] is also recognized for its bamboo bag, that the handle is only from Gucci, that there are signs developed in the collection that are very strong.”

Di Marco laid out a three-pronged strategy for Gucci in China. Events, like the fashion show held Saturday, are intended to “stress the glamour side, the fashion side, our being modern and contemporary.” Gucci has already started and will continue another initiative where Italian artisans travel to first- and second-tier cities across the country to showcase the craftsmanship and heritage behind the brand’s handbags, shoes and silk. The third component involves social responsibility whereby Gucci will work with nongovernmental organizations and the Chinese government on projects ranging from saving pandas to preserving historical sites around the country. “Gucci is one of the most well-known brands in the world, definitely consumers know who we are,” di Marco said. “The problem is that we have to make sure they know why we are, what we stand for, our core values, and that is something that has to be told in numerous ways. I want Gucci in every single moment of its expression to stress again the three features differentiating this brand from any other brand. There is no brand as cool as Gucci and at the same time has the craftsmanship as Gucci and at the same time [socially] responsible.”

The challenges Gucci may encounter in trying to update its image in China were evidenced at the Saturday evening event. A preshow cocktail party was held in a historical villa located in a park near Shanghai’s Bund waterfront. There were lots of logocentric Gucci handbags and shoes, while young women wore mishmashes of animal prints and skintight dresses reminiscent of promwear from the Eighties. Men wore baggy, gangster-looking jeans. A couple of women wore track suits paired with platform heels. Sun Ping, a 28-year-old from the northern province of Shandong, wore fishnets, a black sequined cocktail dress with long fringe on the bottom and one of Gucci’s brown logo bags that she admitted was fake. “Because I am young, I like Cucci,” she said. “I think it is very open.” (Many Chinese pronounce the brand’s name with a C instead of a G).

Kelvin Tam, an architect from Hong Kong who lives in Shanghai who attended the event, said he appreciates Gucci for its Italian heritage and glamour. “I think you can still see the strength of its heritage,” Tam said. “I think the brand is unique. Whether the Chinese carries it in an appropriate way, that is another thing. But its character, its uniqueness, its heritage are all still very impressive.”

Satsuki Konishi, a guest who had flown in from Japan, was surprised at the differences between the two markets. “There are so many young Chinese here. When I go to Gucci shows in Tokyo, guests are more high end. It is completely different. Here they are wearing Hermès and Chanel and in Tokyo, everyone at a Gucci event is wearing Gucci. In China, there is such a big difference.”

On Monday, Gucci’s Asia tour touched down in Seoul, where di Marco and Giannini launched an exhibition of the house’s archival pieces reminiscent of a similar initiative in Kyoto a year ago.

The exhibition, “Timeless Touch of Craftsmanship: Korean Heritage Meets 91 Years of Gucci Archive,” features over 70 archival pieces from Gucci Museo in Florence, juxtaposed with Korean furniture and artifacts from the Joseon Dynasty in traditional architectural setting. The exhibition, which is being held at the Korea Furniture Museum in the hilly northern part of the city, runs from Thursday through May 12.

“[The items in the exhibition come from different time periods], but the passion and material behind it — the feel of authentic and great craftsmanship — are the same. It has been truly inspirational,” said Giannini.

Gucci pledged 500 million won, or about $438,404, to Korea National Trust to help its preservation works of Korean cultural heritage over the next five years. The company recently renovated its Seoul flagship to bring it in line with the rest of its retail network. Di Marco said the new store aims to “rightly communicate what we have doing over the last recent years.”