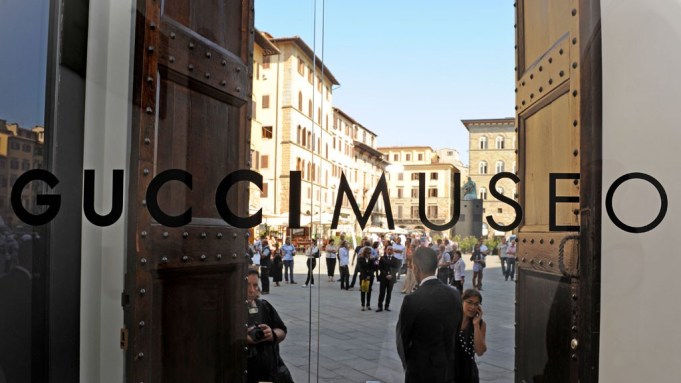 FLORENCE — Gucci sealed its 90th anniversary this year with the unveiling Monday of the Gucci Museo in the heart of Florence, the famed Piazza della Signoria.

Located in the Palazzo della Mercanzia, which dates back to 1337, the museum is only a few steps away from the 13th century Palazzo Vecchio and Michelangelo’s David. “The intent is to tell our story and make it visible for everyone, doing something with and for this city,” said Gucci president and chief executive officer Patrizio di Marco during a morning walkthrough, noting that “eight million people transit on this square.”

The executive said the idea is to present different themes throughout the year for “a dynamic, never nostalgic space,” which could also travel around the world. In addition to a permanent house for the Gucci pieces, the company plans to exhibit a series of contemporary art installations with the support of the Pinault Foundation (Gucci is controlled by the Pinault family’s French group PPR). Works by artist Bill Viola are the first of such temporary shows. “It’s important to have a window on contemporary art in a city as rich in art as Florence,” di Marco said.

He added the museum is “an homage to the city. Although Gucci is a truly international company, we are a Florentine success story,” and credited local artisans and their craftsmanship for the growth of the firm. He said that creative director Frida Giannini “has always been very respectful of Gucci’s history and its origins.”

Covering 18,460 square feet over three floors, the Gucci Museo is arranged by theme and not in chronological order. In the private basement are the Gucci archives.

The first room is dedicated to travel, a central theme for the house, which was founded by Guccio Gucci in 1921 after his experience as a busboy at the Savoy Hotel in London, where he was fascinated by the travel luggage owned by the rich guests. Suitcases made in zebra skin or featuring the brand’s staple diamanté pattern from the Thirties and a wide selection of beauty cases are displayed in softly lit glass cases. A 1979 limited edition Cadillac Seville designed by Guccio Gucci’s son, Aldo, upholstered and decorated with the brand’s GG monogram and green-red-green stripes, is a standout. “We bought it from a Florida-based collector and it’s still functioning,” remarked di Marco.

Variations on Gucci’s bamboo bag, in raffia, suede or crocodile, and the totes inspired by the horsebit are only some of the brand’s bags on display.

The Flora design, originally created by painter Vittorio Accornero for Grace Kelly in the Sixties and last updated in 2005 by Giannini, is shown in its many variations through the years, including a set of ceramics. To convey a sense of continuity, there is also a room dedicated to the more recent Première couture line designed by Giannini, with gowns worn by Hilary Swank and Naomi Watts, among others. The Hollywood connection is apparent throughout the museum, decorated with videos and photos of Gucci-wearing actors ranging from Audrey Hepburn, Elizabeth Taylor and Grace Kelly to David Niven and Tony Curtis.

One area is a study on Gucci’s GG monogram and is aptly called Logomania, displaying several variations of the pattern.

The Lifestyle and Sport themes round off the selection. Accessories for tennis, golf and horse riding — even a Gucci surfboard — are displayed alongside picnic baskets from the Fifties, chess and card sets and armchairs.

A cafe, a book shop in collaboration with Rizzoli, and the Icon Store, which carries bags, accessories, jewels and scarves designed by Giannini exclusively for the museum, are on the ground floor. Original, historic stone crests of Florence guilds, from oil makers to teachers, adorn the walls of the bookshop, as the building originally housed the diverse guilds of the city.

Fifty percent of the museum’s ticket proceeds will be devolved to support the restoration of artistic monuments in Florence.