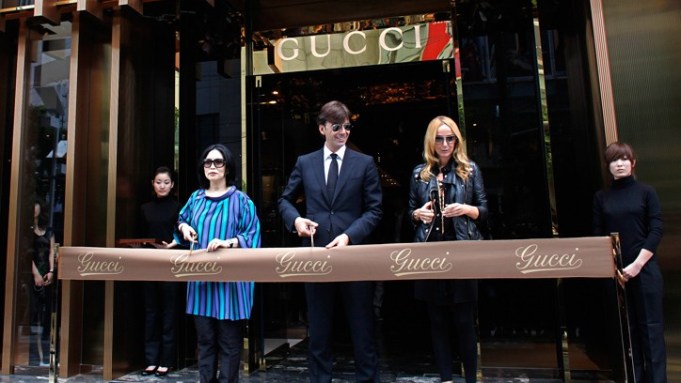 SHANGHAI — Even as luxury faces a global slump, Gucci chief executive officer Patrizio di Marco maintains a cautious optimism toward China and the rest of Asia.

“Overall, the luxury market’s growth is forecast at negative 8 to 9 percent into 2010, but Asia — and especially China — are forecast at plus 10 percent,” di Marco told WWD. “Of course China is affected, with Shanghai as a financial center, but it’s not to the level of other cities and markets. New consumers and growing knowledge offset those who lost millions on the stock market, so there is a structure for growth.”

Gucci is banking on that by continuing to open new stores in Mainland China at a steady clip, including a Shanghai flagship di Marco and Gucci creative director Frida Giannini unveiled with a ribbon-cutting last Saturday and gala dinners here preceded by one in Beijing, where Giannini visited a children’s eye hospital the fashion house supports. The Beijing dinner was hosted by Vogue China at Daniel Boulud’s Maison Boulud restaurant, set in the newly renovated Legation Quarter. Among the guests were actress Zhang Ziyi, and members of the pop band Sper VC.

Gucci is also marking the opening with a special edition Dragon Bag “with a red dragon representing the culture of China, an homage,” said Giannini.

Visiting the Mainland for the first time, Giannini expressed enthusiasm for more than just Chinese consumers’ growing demand. “I was very happy yesterday because I got the chance to visit the Forbidden City. What I hate in Hong Kong is that the antique buildings have all completely disappeared and have been substituted by modern architecture. I understand that things change, but it is important to maintain traditions, and that is my hope for China. Beijing still has a balance between the traditional and the modern.…My biggest surprise was how modern and big Beijing is, so full of skyscrapers and full of people in the street.”

At the Beijing dinner, “the people were very attracted to the Western lifestyle [Gucci represents]. I met artists, musicians, actresses; there was a very young vibe,” she added.

As reported, the 17,000-square-foot Shanghai flagship is Gucci’s 28th directly operated store in Mainland China. Replacing an older and smaller flagship in the nearby Ritz-Carlton, due to shutter in August, the new Shanghai store is located on Shaanxi North Road in the recently renovated and reopened Golden Eagle Plaza, which is situated behind established luxury destination Citic Square. Gucci’s three-story façade is prominently visible from the prestigious Nanjing West Road shopping avenue.

Gucci also opened a new Wuhan store in late May and will expand on its Beijing locations this week by opening a shop at the Lotte Department Store in Wangfujing. Di Marco expressed plans to grow to at least 30 Mainland units by year’s end, and up to 40 or more in future years.

With a higher profile and recognition in China than most of its competitors, Gucci’s has expanded heavily into second- and third-tier cities, and now the company is in 18 cities around the country. Di Marco argued the differences between China’s cities are smaller than assumed. For example, “Wuhan, where we opened two weeks ago, is considered a third-tier city, but the population is huge. With a 450-square-meter [4,800-square-foot] store, in the first three days we did sales of 240,000 euros [or $332,760 at current exchange]. Two things are impressive: One is how well the Gucci brand is known in a market that is still developing. Two is how present the luxury consumer is in a city like Wuhan — the night before the opening it had a line outside.”

Newer and more obscure cities offer additional growth potential, he added. “What is exciting is that McKinsey Research shows that, with migration into the cities, in three to five years China will have entirely new cities forming. Population is a factor to consider, as well as the widespread knowledge of luxury, and that is growing.”

Asia-Pacific was Gucci’s second-largest market in 2008, bringing in 600 million to 700 million euros, or 28 to 30 percent of global business, di Marco specified, and is poised to overtake Europe this year. About 50 percent of those revenues were from Mainland consumers, buying abroad as well as domestically. “Chinese are increasingly going to Europe, and starting to substitute the weight that the Japanese used to have.…China is moving towards the direction of Japan, but at a faster pace and with a bigger size,” he said. “Three years ago, there was talk of Chinese and Indians becoming the most important travelers; for example, 100,000 Chinese visitors to Europe by 2010,” and for China that remains likely.

“In terms of culture,” Giannini added, “Japan is a very traditional country: The young people are very creative, but still very conservative. Whereas the Chinese want to show the strong new face of China. India I haven’t been to, but it also has a different reality and society: There is no middle class, just the very rich and the poor. Each has different roots and traditions.”

While Gucci remains heavily pirated in China, both in apparel and in things such as a “Guci” cafe chain, di Marco felt it has become less epidemic. “China, since [joining] the World Trade Organization, has been more sensitive to counterfeiting, toward Gucci stores that were not Gucci stores. Those are not something we like.”

More of a challenge, expressed Asia Pacific ceo Mimi Tang, is overcoming China’s traditionally Communist-style customer service attitude. “Gucci’s commitment is to offer the total experience to the Mainland consumer, to pamper them, so we want our service to be good,” she explained. “Finding staff is quite difficult, especially in new cities. They all lack that luxury brand experience. In Wuhan we had over 1,000 candidates from advertising in newspapers. We chose based on attitude, so that they can take care of customers from the heart. Training is not about length but effectiveness, and then we have ongoing workshops for all levels of staff.”

A focus on localized human resources makes Gucci fairly unique among international luxury brands in China. “We have 800 people on the payroll of Gucci China, and 800 of them are Chinese. I am glad to say that we are not just a foreign company with expatriate staff — which is hard because people do not stay in the country for the long-run,” di Marco specified. “To build operations this large, we need people who understand the complexity.”

Gucci also is unusual in that its China prices are only 10 to 13 percent higher than global standards, said Tang, compared with most brands, which pass on China’s 30 percent import and luxury taxes — and often higher operating costs as well — to consumers. “Our customer is not price conscious, but we want to be fair to consumers,” said di Marco. “Brands have two choices: either the customer pays, or not. We therefore have lower profitability, but versus something that is absurd: If there are 100 million Chinese traveling the world, they will feel annoyed if they feel taken advantage of.”