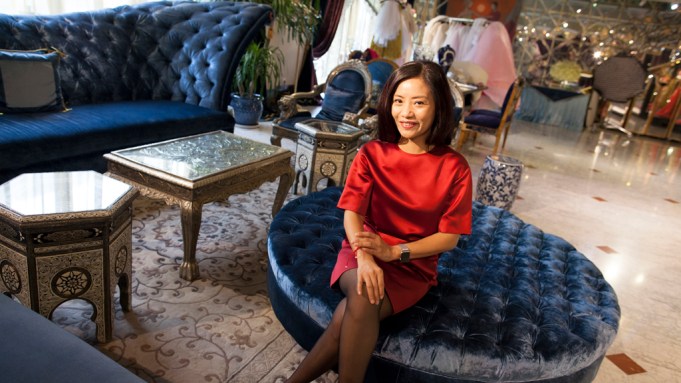 BEIJING — Guo Pei is known throughout China — but it took Rihanna to make her famous in the West.

In May, Guo garnered international attention when the singer donned one of her designs to the Metropolitan Museum of Art’s Costume Institute Gala, which marked the opening of its “China: Through the Looking Glass” exhibition. The 55-pound canary-colored gown, heavy mostly because of a shockingly long fur cape, took around two years to make, according to Guo, who also had gowns on display in the exhibit.

Guo said the singer found her via the Internet. “I actually didn’t think the dress was the right one for her,” Guo said. “I thought it would be too heavy and too hot, but she was so touched the moment she put it on.”

And now that Rihanna put the designer on the international fashion map, Guo is using the opportunity to gear up to expand overseas.

The designer will have several gowns on display from July 6 to 8 in Paris’ Musée des Arts Décoratifs. The exhibition coincides with the couture shows. She said she hopes to present a collection during next year’s couture, and, as a sign of bigger international ambitions, Guo recently launched her own studio in Paris, called Guo Pei SAS. There, she said, she will begin to showcase collections suited more for Western tastes.

Guo has around 400 clients who frequent Rose Studio, her design epicenter on the outskirts of Beijing. The inside of her studio reminds one of Elvis Presley’s Graceland, except it represents a tribute to the extreme opulence both admired and embraced by China’s ever-growing class of new rich.

There are velvet couches the size of hearses; cages of birds and tanks of goldfish; end tables imported from Morocco; a giant stuffed tiger, and a real tiger hide rug. These are reflected in mirrored ceilings adorned with chandeliers and silver ornaments that look like Christmas decorations. A sweeping staircase has a gold-colored banister that looks like a thick garland made of exotic plants from a rainforest.

Upstairs, hundreds of employees work on the most meticulous of tasks: embroidering, beading, sequinning and sewing. They’re making dresses, evening gowns, suits and skirts for the designer’s customers, who range from the simply rich to some of the country’s best-known celebrities.

As for the future of couture in China, Guo said she think there is still a long road ahead. Many young designers are claiming they create couture, yet do not understand what that means or do not have the experience to execute.

“Designers need time. They need to pay attention to their daily work,” Guo said. “The phrase haute couture is flooding the market in China, but many young designers just want to be famous. I think time is the main issue. China needs another 10, maybe 20 years, to develop its own couture culture.”