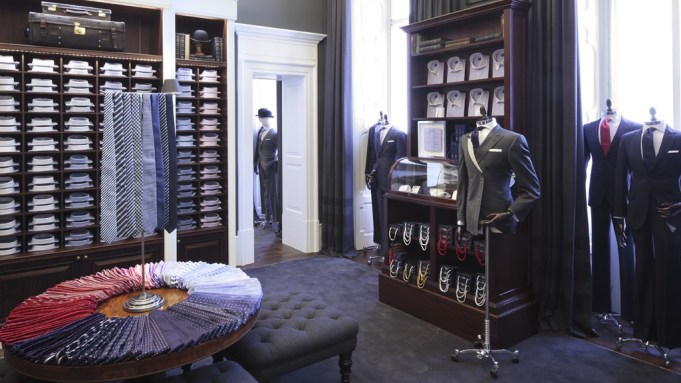 Located on Via Manzoni, the two-story, 5,705-square-foot flagship is part of the company’s retail expansion strategy, which includes its debut in China, with a store in Hong Kong, and two in Northern China next fall, along with the opening of its second door in Tokyo, in the Ginza district.

“Our plan is to have a retail presence in the most important cities, because through our direct stores we can control how our product is sold and distributed,” said Hackett London chairman and founder Jeremy Hackett, who also pointed to the Middle East as an important growing market.

“Being Milan is the city of fashion and clothes, you have to be here,” he said. “In addition, Italy has a reputation of selling British brands well, and Italian men can wear British clothes better than the British. Italians enjoy clothes, while in England people do shopping because they need to.”

Owned by Spanish private investment firm Torreal, which acquired the brand from Compagnie Financière Richemont in 2005, Hackett London currently counts 37 freestanding units, including doors in London, Paris and Dubai among others. Its collections are also available in 44 multibrand stores worldwide.

“Surprisingly, last year was pretty good,” Hackett said. “Even if it’s going to be tough, we are optimistic, because we have a particular product, which is affordable and has a good value for money. Men want to invest in quality and don’t want to waste their money. In general, I think that people will tend to buy less but better.”

“Every time we open a new store, we think it’s the best, but this is really the best,” Hackett commented. “We invested quite a lot of money on it, and even if each one has its individuality, this is very similar to the London store.”

From the sumptuous entrance hall in granite and chalk stone, a large spiral staircase leads to the first floor, where the Hackett Mayfair and formal collections are showcased in luxury rooms with vaulted ceilings and furnished with heavy carpets, antique lamps and vintage leather chairs. The level also hosts a sort of library, where accessories are displayed on bookcases and an oak bar cabinet is embellished with antique bronze intarsia where the customers can stop for a drink.

The ground floor, featuring an oak floor and walls covered with exclusive tapestry and decorated with pictures and paintings from the Fifties and Sixties, is dedicated to sportswear. The children’s line is also on display here, along with the collections designed for prestigious sports events, such as Aston Martin Racing and the Oxford & Cambridge Boat Race.

In addition, a Savile Row-inspired personal tailoring service is available at the store. Customers can choose among a range of British fabrics to customize their own shirts (from 180 euros, or $236 at current exchange, to 270 euros, or $354) and suits (from 1,800 euros, or $2,360), which are completely handmade in England.