In the next few years, the brand’s retail network could easily reach 50 to 100 units globally, according to ceo and chairman Ben Malka. 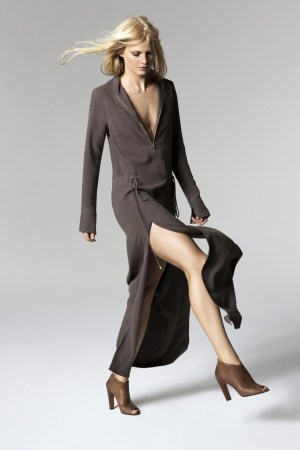 The revival of Halston is taking a major step forward in March with the opening of three Halston Heritage stores and at least 10 this year.

Since he assumed control of the brand in 2011, Halston chief executive officer and chairman Ben Malka has been plotting the company’s return to retail. Stores were historically a critical component of the brand, whose founder Roy Halston Frowick was one of the earliest designers to have namesake stores, beginning with a location in 1968 on Manhattan’s 68th Street, and perhaps are more important today as Malka reintroduces the label to customers in an immensely cluttered marketplace.

“It allows us from the windows to the floor to expose the brand in a consistent way to the consumer,” said Malka. “Imagine these poor department stores that have 300 brands changing monthly and having 300 ceo’s telling them they are right and educating them on what they are trying to sell. It is very difficult. They do the best they can, but they will never be our brand, not unless you have an in-store shop that you manage. If you want to be a brand at this level, you have to be able to expose your brand. There is no better marketing tool.”

Although there are retail plans for both Halston and the diffusion line Halston Heritage, it is the latter that is prepared to get out of the retail gate first. The premier location will be a two-story, 4,400-square-foot unit on Madison Avenue at 83rd Street that is expected to open in early March, followed by 3,000-square-foot stores at the shopping centers Beverly Center and The Somerset Collection in Los Angeles and Troy, Mich., respectively.

“Because there is Halston, there are streets I won’t go to with Heritage. There are certain malls, the runways, all those things are reserved for that brand,” said Malka. “It could be Meatpacking and Fifth Avenue versus Madison and SoHo. There’s segmentation.”

In the next few years, Halston Heritage’s retail network could easily reach 50 to 100 units globally, according to Malka. The brand’s international retail debut at The Avenues in Kuwait will come shortly after it starts retailing in America. In addition to the Middle East, Halston Heritage is working on deals to spread units in Southeast Asia and India.

Halston and Halston Heritage stores will dive into the well of Halston’s rich heritage — Halston’s minimalist aesthetic is a strong influence, for instance — but Malka emphasized the Halston Heritage stores were created with approachability in mind. “This isn’t the luxury part of our brand. It is our diffusion. You want people to understand the heritage of it being luxury, but also be inviting,” he said.

The windows set the stage for the message about the brand that the Halston Heritage stores seek to communicate. Described by Malka as “extremely minimalist,” they are rimmed in a double “H” for Halston Heritage and showcase clothing on several mannequins crafted in positions to convey movement. “To me, it is about simplicity. The story is movement, our mannequins and the clothing,” said Malka.

The theatricality of mannequins is something Halston cultivated in its stores from the early days, and the new Halston Heritage stores bring that theatricality back. In the Madison store, there are some 20 mannequins. When customers enter the store, they encounter a central platform with mannequins. There are also mannequins sitting in the spaces above hanging clothes. “Remember, Halston is about drape,” said Malka, elaborating on the reason behind the use of mannequins. “On a hanger, it will never look as good as it does on the body.”

Beyond the mannequins, much of the design inspiration for the store is rooted in Halston’s New York apartment and his passion for art, music, fashion and cinema. Floating shelves displaying footwear are akin to a floating staircase in his apartment, and the three-dimensional backdrop for the handbag collection is influenced by intricate architectural squares that were in the trellises. Halston’s signature color was gray, and shades of gray are everywhere. Even the wood flooring has gray in it.

Halston’s love for ballet is the source material for store fixtures shaped like ballet barres. There is no advertising imagery featured on the walls of the stores. Instead, fashion illustrations from Bil Donovan and others decorate them, as well as photographs from the Halston archives capturing the array of celebrities that wore Halston in the Seventies. “He is credited for paving the way for our industry with celebrities,” Malka said. “Elizabeth Taylor was his best friend. Liza Minnelli considered him her big brother and Studio 54, whatever the good or bad of it was, it was really about being part of the celebrity scene and using it to promote fashion. He understood that before anyone else.”

About 30 percent of the store is dedicated to accessories, while the remainder is split between ready-to-wear and gowns. Footwear is being launched at the stores, the only places it will be available for the moment. Halston Heritage retail prices for handbags and ready-to-wear range from $395 to $895. Highlighted in a retail environment, handbags could become a larger piece of the brand’s business. “Instead of offering contemporary handbags with some luxury infusion, we offered luxury handbags with contemporary infusion at the same price. They are really, truly luxury bags that we think will be a big, big success,” said Malka. In particular, however, he sees the evening category as differentiating Halston Heritage in its segment. “The idea is to offer very elevated garments at an affordable price,” he said, adding, “We are really focusing on a modern 30- to 50-year-old that goes to work, and at night we dress her.”

Malka wouldn’t discuss retail revenue projections, but underscored the stores are “built to make money the first day.” From an annual sales-per-square-foot perspective, he said, “I would say that I’ve been extremely conservative, shaving off high percent points of what the mall tells us is their averages in order to plan for the worst and aim for the best. We are going to build the client base. We will see the adjustments that I need to make.”