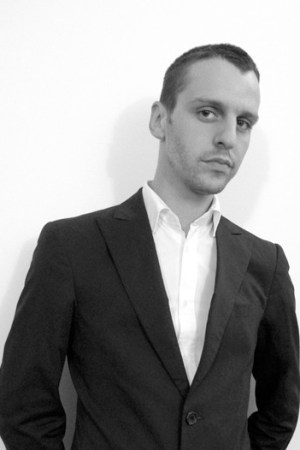 NEW YORK — Ending one of the most speculated-about searches in recent months, Halston has tapped London-based designer Marios Schwab as its new creative director, effective July 1.

WWD first reported that Halston was in talks with Schwab on March 10.

The brand, which was acquired by Hilco Consumer Capital and The Weinstein Co. in 2007 and has since been working on a revival, will also launch the Halston Heritage collection. It will feature reproductions of original Halston looks at contemporary price points for spring 2010, which will be manufactured in a partnership with Li & Fung Ltd.

Schwab will be in charge of the house’s main collection. He succeeds Marco Zanini, who left the company last year after two rocky seasons as creative director of the revived line.

Half-Austrian and half-Greek, Schwab, 31, studied at Central Saint Martins College of Art and Design in London, and launched his own label in 2005. He started showing his line during London Fashion Week in 2006.

His first collection for Halston will be unveiled next February for fall 2010.

Halston president and chief executive officer Bonnie Takhar said Schwab’s spring 2009 show in London caught the attention of Halston executives. “He used a lot of jersey in the collection in a very modern way,” Takhar said. “The silhouettes were also very fluid, and we thought they had a very modern Halston interpretation.”

Several meetings and a project Schwab submitted impressed the Halston board. “The DNA was very Halston-appropriate in terms of what we think Halston should be,” Takhar said. “His knowledge of the Halston brand really impressed us.”

Schwab’s earliest memory of Halston is the iconic image of Bianca Jagger on a white horse at Studio 54.

“Halston defines a moment in time, epitomizing the glamour, escapism and decadence of the 1970s,” he told WWD. “The simplistic yet unquestionably glamorous silhouettes embody the fantasy side of fashion.

“While Halston’s DNA is crucial to its future success, I very much wish to move the brand forward and make it relevant for today,” he added. “Simple, effortless pieces realized via modern [fabrics] and technology will play a large role in how I will redefine the brand. The clothes will echo the heritage but with a very distinctive, modern feel that is completely new and completely now.’’

Schwab, who will continue with his own namesake line, plans to relocate to New York. He will helm the design studio, and work with the shoe designer, handbag designer and ready-to-wear design assistants on the main collection.

Schwab’s own collection is sold at Barneys New York and Saks Fifth Avenue. Halston’s fall season was created by the in-house design studio, and Takhar said the timing was right to bring in Schwab. “Marco did a great job with helping us relaunch the brand and we now believe Marios will cultivate the DNA and as we grow the business,” she said. “It was the right time to bring in somebody to take it to the next stage.”

In September, Halston will also unveil the Halston Heritage collection, which consists of reissues of iconic looks at contemporary price points.

The current retail climate accelerated the launch, she explained.

“The retail world is very challenged, and retailers are looking for designer names at accessible price points, which is the call-out pretty much everywhere,” Takhar said. “It just seemed like the right time to bring in Halston Heritage.”

In the company’s Spring Street showroom, mood boards feature images of Halstonettes such as Pat Cleveland, Karen Bjornson and Jagger, with corresponding sketches of the dresses they wore in the photos.

“We will have the archival pieces offered exactly as they were, but have them merchandised to fit in with today’s world as well,” Takhar noted. “There might be a retailer who says, ‘I want it exactly how it was then’ and we offer that to them, but then we may have a department store come in and say, ‘My customer isn’t wearing it down to the ankle,’ and we can give them a modernized version of it as well.” The line, which will be launched worldwide, is expected to sit alongside labels such as DKNY, Tory Burch, Marc by Marc Jacobs and Diane von Furstenberg. It will be delineated by a new logo that features two intertwined “H” letters.

The looks will range from Halston’s tie-dye and sequinned dresses to his Ultrasuede and chiffon dress, espadrille wedges and sac bags. The line will carry suggested retail price points from $55 for a T-shirt to $595 for an occasion dress. Design and distribution will be handled in-house, and the collection will be produced in China in a partnership with Li & Fung’s Silvereed division. It will be unveiled this September.

Takhar, who declined to reveal sales projections for Heritage, said she envisions a crossover between the two lines.

“This is going to provide us with an opportunity to serve a much broader customer base, which is in line with what we have been doing with our marketing initiatives,” she said, referencing the viral marketing campaign featuring a video instead of a runway show for fall.

Halston plans to support the new Heritage line with a dedicated e-commerce site, which is expected to launch by early 2010. The company is currently searching for a spokeswoman, “who will be representative of the modern Halstonette today and will speak to the consumer.”

While other fashion houses venture into secondary lines to create sources of revenue that can support the costly collection business, Takhar downplayed the notion. She said the addition will help crystallize the difference between the brand’s history and its future.

“This is a real separation,” she said. “We are going out with Halston Heritage saying exactly what it is. It is a part of the history of the brand and it is reproductions of the most iconic pieces. Marios’ collection will strive to be innovative and forward looking.

“This will allow Marios to really focus on bringing innovation to and modernizing the main collection,” she added.

The company is also working on a fragrance launch with Elizabeth Arden, and tapped scent guru Carlos Benaim to update the original Halston fragrance for women and men. “Whenever we talk about Halston, everyone would say, ‘I remember the fragrance,’” Takhar said of the scent in the iconic Elsa Peretti-designed bottle. “We thought the timing to bring it back in a modernized way would be perfect.”

Halston executives are hoping that these moves will create the platform for growth once the economy turns around. “We are laying the building blocks for the future,” Takhar said.