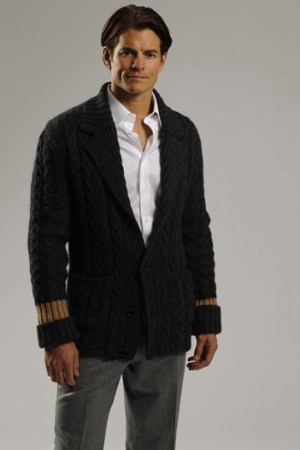 Get ready to step out. The Halston man is back.

The company unveiled looks from its two Halston men’s lines in an exclusive to WWD, and the iconic American designer’s own personal style (and love of nightlife) clearly made a deep impression.

“He was a linchpin of club culture in his day, and he looked great in a dressed-up, minimal way,” said Tom Wallis, president of Halston men’s wear. “That was our guide. We wanted to make Manhattan clothing.”

Halston, whose clothes were synonymous with disco-era glam and was himself a habitué of the party circuit, likely would be at home in the debonair, wide-lapel suits; sleek, dark coats, and velvet jackets that populate the new collections.

In Heritage — the brand’s more affordable, slim-fitting secondary line that is launching at Bloomingdale’s this fall — there’s a tailored double-breasted pinstripe jacket, a camel hair suit and red turtleneck (both lines offer lots of turtlenecks, a Halston favorite) and brightly hued dinner jackets, as well as sporty but formal dress shirts and denim.

Both lines eschew the lived-in look that is so pervasive in men’s wear, and instead offer clothes made for the reflection of the disco ball.

The men’s side was never a focus for Halston, who licensed the name to classification players. The brand had a presence in tailored clothing but was never a significant collections business.

When Jim Ammeen, president of Neema Clothing, purchased the Halston name in 1999, he made plans to restore the women’s business and create the men’s business. Ammeen retained the license to launch the brand’s men’s wear after he sold the name to Hilco and the Weinstein Co. in 2007, but tabled plans to launch men’s wear until the women’s lines were more established.