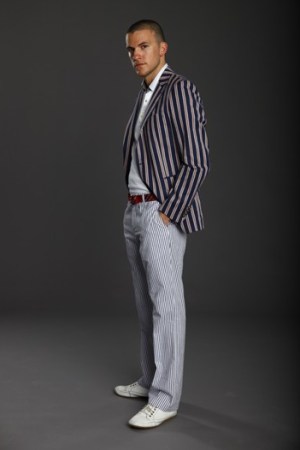 This story first appeared in the August 6, 2009 issue of WWD. Subscribe Today.

So it was perhaps just a matter of time (and business acumen) before somebody tapped the source of that look — Ivy League universities — for a brand.

Harvard Yard is a collaboration between Harvard University and private label tailored clothing manufacturer Wearwolf Group, which has licensed the name from the school to produce a contemporary men’s wear collection based on classic Ivy League style. The license, arranged by The Collegiate Licensing Co., not only highlights the growing relevance of classic American style, but also stands as perhaps the first time an American university has lent its name to a fashion-oriented collection of apparel.

“We’ve long wanted to get into the branded space,” said Jeffrey Wolf, whose family-run company makes suits for retailers such as Casual Male and Macy’s. “And we thought Harvard had a rich and authentic connection to this particular style. As a brand, Harvard seemed like a perfect vehicle for this collection.”

Not only is Harvard one of the most recognized universities in the world, it also served as the font of Ivy League style in the late Fifties when its undergraduates flocked to stores such as Brooks Brothers and J. Press to snap up what would become prepster staples: button-down shirts, flat-front khakis and penny loafers.

Harvard Yard, named for the grassy area at the center of the university, uses that particular spot in Cambridge, Mass., as the source for its spring collection, which features short-sleeve plaid shirts, Liberty print wovens, seersucker shorts, regimental stripes, sporty knits, patterned jackets and fancy pants — all in a contemporary, tapered fit.

“There is an Ivy League tradition that has long influenced men’s dress,” said John Fowler, the new brand’s creative director, who used archival photographs of Harvard campus life in the Sixties as inspiration for the line. Fowler worked with Wolf in his previous posts at JA Apparel and Federated Department Stores. “It’s a style that has become current again and not just with the American consumer. We think Harvard Yard will have global appeal.”

Under terms of the deal, Wolf was granted a 10-year global license for the Harvard Yard name for men’s, women’s and children’s apparel. “We want to launch into those spaces as well,” said Wolf, “but we thought it best to start with a men’s collection.”

The brand will be operated under the Verus Group, a newly created subsidiary of Wearwolf and the Latin word for truth — a nod, Wolf explained, to Harvard’s classic, liberal arts curriculum.

The deal marks an evolution for college licensing, too. That business historically has gravitated toward casual apparel and sweatshirts at the university bookstore.

“Most product in this market is aimed at alums and fans of the universities,” said Kit Walsh, a senior vice president at The Collegiate Licensing Co., which manages Harvard’s international licensing business. “Harvard Yard is more oriented to the stylistic associations of the Harvard name — its lifestyle component.”

Harvard’s name does not appear on any of the apparel, save for interior labels. Instead, the university is deftly referenced through use of the school’s color — crimson — which appears in buttonholes, zipper pulls and other trim.

“The idea,” Walsh said, “was to create a line of clothing where Harvard represented not just a university, but a style, too.”

In addition to Fowler, to launch the brand, Wolf brought in Greg Lagola, the former head of textiles for Bill Blass, as the designer, and Vince Gonzales, who will head up sales.