Rumors have been circulating for some time that de la Renta was scouting Copping, who has been creative director of Nina Ricci since 2009. 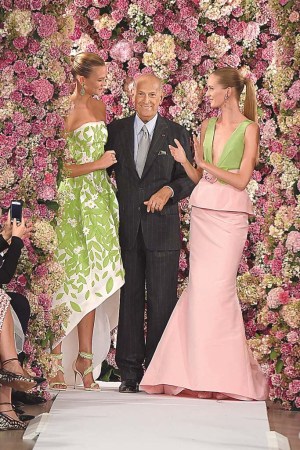 This story first appeared in the September 12, 2014 issue of WWD. Subscribe Today.

Rumors have been circulating for some time that de la Renta was scouting Copping, who has been creative director of Nina Ricci since 2009. When, during a WWD interview the morning after the Costume Institute gala in May, Copping was asked if the speculation were true, the designer demurred without issuing a firm denial.

Neither de la Renta nor Copping could be reached for comment Thursday at press time.

Given Copping’s history and aesthetic, he makes a good candidate for de la Renta. Both designers are established romantics, always designing for the woman who wants to flaunt her feminine side but in a tasteful, sophisticated way. In the five years since he succeeded Olivier Theyskens as creative director of Nina Ricci, Copping has built a strong identity for the label. His runway shows often play as a procession of living dolls. In recent seasons, the designer has been increasingly focused on what his customer wears during the day, proposing sweater dresses, coats and fluid pajama looks, all rendered with romance. He reenergized Ricci’s handbag business earlier this year, partnering with Leandra Medine of The Man Repeller on a limited-edition collaboration of the Marche handbag.

Copping also has another quality attractive to potential employers: “I absolutely never had any desire to do my own thing,” he told WWD in May. “I don’t know if there’s any need for another brand. And I don’t know if I’d have any more to say that I couldn’t say within the structure of an existing house.”

He likes the challenge of working within established parameters. Born in England, he got his first job out of the Royal College of Art and Central Saint Martins in London at Iceberg. He did multiple undergraduate and postgraduate internships, including with Christian Lacroix during his poufy prime in the Eighties, an experience Copping described as “fantastic.” Prior to Ricci, Copping spent 12 years as head of Marc Jacobs’ atelier at Louis Vuitton, where the aesthetic veered wildly from season to season — what was extreme and architectural for fall, for example, might give way to a cartoonish spring. But Copping has always favored Gallic romance. “The more feminine collections came easier somehow,” he said. “It felt more natural.” Perhaps Copping can channel his inner American at Oscar.

De la Renta, 82, has been looking for a design collaborator and possible successor for some time — most visibly in 2013, when he hired John Galliano for a three-week designer-in-residence role. Galliano’s influence was very visible in de la Renta’s subsequent fall 2013 collection. It was a bold risk for de la Renta, who later was said to have engaged the controversial Galliano in advanced talks of permanent employment, which eventually disintegrated when the former Dior designer pushed to bring his own staff with him.

Born in the Dominican Republic, de la Renta has helmed his own label since 1965. Prior to that, he apprenticed for Cristóbal Balenciaga and Antonio Castillo at Lanvin. He designed for Balmain from 1993 to 2002, but is mostly associated with New York City uptown polish. Charming and outspoken, de la Renta has been known to run in high-profile political circles and is a close friend of Henry Kissinger and the Clintons. Earlier this week at his spring show, each seat was topped by a Wild Republic stuffed elephant toy, to support the movement against ivory poachers, a pet cause of Hillary and Chelsea Clinton; the stuffed animal also implied de la Renta’s support of Hillary in 2016. De la Renta has always been active in the fashion community as well, having twice held the position of CFDA president.

In 2004, de la Renta named his son-in-law Alex Bolen as chief executive officer of his company, preferring to keep it a family business. His stepdaughter Eliza Bolen oversees de la Renta’s $250 million licensing business. They clearly see it as a growing enterprise. Oscar de la Renta Inc. quietly sold a 20 percent stake in the company to GF Capital Management & Advisors in summer 2010 to provide additional financing to launch its own beauty business and expand retail.

Still, the issue of succession rose as de la Renta battled health issues in recent years. “For a long time, I have always worried about what will happen to the brand when I am no longer here,” de la Renta told WWD last year. “I plan to be here for a very, very long time. But having my family involved in the business, now I know there is continuity. To be clear, my only fear that I have every morning is, when are they going to fire me?”

It seems no one is getting fired — just hired, in Copping’s case.

Copping could not be reached Friday as well.

It is understood Copping’s current contract with Ricci runs through the end 2016.