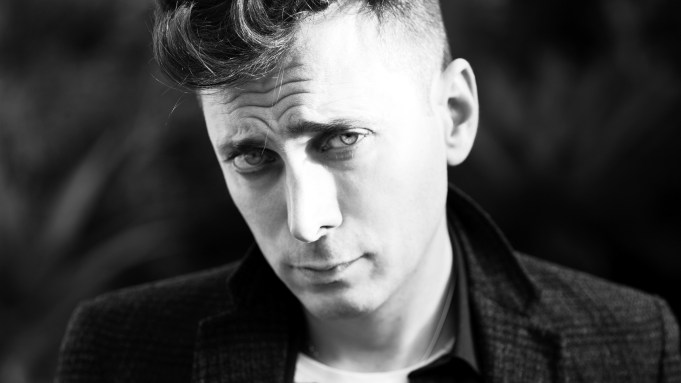 PARIS — Hedi Slimane is making his second exit from the creative helm of Saint Laurent.

Kering, parent of the mythic fashion houses, said the separation comes at the end of a “four-year mission, which has led to the complete repositioning of the brand.”

“What Yves Saint Laurent has achieved over the past four years represents a unique chapter in the history of the house,” François-Henri Pinault, chairman and chief executive officer of Kering, said in a joint statement with Saint Laurent. “I am very grateful to Hedi Slimane, and the whole Yves Saint Laurent team, for having set the path that the house has successfully embraced, and which will grant longevity to this legendary brand.”

YSL ceo Francesca Bellettini echoed his thanks, noting “the direction that has been taken over the last four years represents an incredible foundation for the brand to build on for its continuous success.”

Today’s announcement is sure to speed the naming of Slimane’s successor, widely expected to be Anthony Vaccarello — and possibly in time for the spring 2017 shows in Paris this fall.

WWD first reported on Jan. 13 that Vaccarello was the frontrunner to succeed Slimane, who had failed to reach an agreement on a new employment pact at Saint Laurent.

Kering and Saint Laurent would only say that “a new creative organization for the house will be communicated in due course.”

A designer partial to the racy, fast-paced side of fashion, Vaccarello had recently been recruited by Donatella Versace for her reboot of the Versus brand.

Vaccarello, 33, would become only the sixth ready-to-wear designer at YSL. Successors to the legendary couturier, who retired from fashion in 2002 and died in 2008 at the age of 71, also included Alber Elbaz, Tom Ford and Stefano Pilati.

Slimane earned his reputation as a men’s wear maverick, initially making a name for himself as the designer of Yves Saint Laurent Rive Gauche Homme in the late Nineties, when Elbaz was in charge of women’s rtw, before going on to popularize skinny black suits and rock-tinged androgyny at Dior Homme.

Vaccarello would step into a brand also reinvented top-to-bottom by Slimane, an exacting image-maker who exerted total control over Saint Laurent’s collections, ad campaigns, store design and communications strategy, linking the brand with his personal penchant for indie rock and California cool.

Returning to design after five years devoted to photography and art making, Slimane revved up the brand with retro, rock ‘n’ roll-inspired fashions and a “reform project” that touched everything from the collection architecture and carrier bags to the VIP discounts at its boutiques.

Slimane conceived the event as a tribute to the music scene in L.A., the Frenchman’s home since 2008. It also coincided with 10 years of the designer’s photo blog, “Hedi Slimane’s Diary,” which has frequently documented the California scene.

His women’s show in Paris on March 7 was more intimate, staged at the brand’s Rue de l’Université couture salons with no music as he paraded what some saw as a parody of Eighties fashion excess.

Slimane’s exit delivers another shock to the French fashion scene, wracked late last year by the exit of Raf Simons from Dior and the ousting of Elbaz from Lanvin. Lanvin recently named Bouchra Jarrar as its new women’s designer, while Dior has yet to name its successor.

These dramatic changes seem to signal a seismic shift in the fashion industry, as star designers buckle under the pressures ­and/or restrictions of an accelerating and high-stakes industry.

Vaccarello would join one of the fastest-growing fashion houses in Europe.

In the fourth quarter, revenues at Saint Laurent catapulted 37.4 percent to 287 million euros, or $318.2 million, a 27.4 percent gain stripping out the impact of currencies.

Saint Laurent recorded revenues of 974 million euros, or $1.08 billion, last year with a network of 142 stores — far fewer locations than mega brands such as Gucci, Dior, Chanel or Louis Vuitton.

In a research note on Friday, Chauvet said the brand registered its highest operating margin ever in the second half of 2015 — approximately 20 percent — and this should rise on scale effects, more leather goods sales, pricing, maturity of the store network and “better absorption of fixed costs.”

Citi estimates Saint Laurent should contribute 15 percent of group sales and 12 percent of earnings before interest and taxes growth over the next three years, up from 8 percent and 9 percent at present.

“The strategy is unlikely to change materially post Slimane’s departure and we believe that the Saint Laurent brand will capitalize on its solid foundations and strong DNA,” Chauvet noted.

He added that Saint Laurent management told analysts the company would “mark a pause in the brand development and not over-expand the retail network to protect exclusivity.”

Saint Laurent counted 142 directly operated stores at the end of 2015, compared to 525 at Gucci and 251 at Bottega Veneta.

The changing of the guard at YSL will spark another guessing game about Slimane’s next move.

An art history graduate from the École du Louvre, Slimane emerged from fashion’s shadows during his first stint at YSL. Hired as an assistant in fashion marketing at YSL in 1997 and then quickly promoted to designer, Slimane successfully revved up the label’s Rive Gauche Homme collection with sleek, androgynous tailoring: leather trenchcoats, pinch-waist suits and plunging shirts. He was a pioneer in inviting contemporary artists such as Ugo Rondinone to put works in YSL stores, positing his clothes in a broader cultural context.

Slimane resigned from YSL in 2000 to pursue exclusive negotiations with its parent, then known as Gucci Group, for the launch of his own label. He ended up signing on with luxury rival Dior, embarking on an ambitious project that electrified men’s wear with his glitzy fashion shows and minimalist boutiques.

He exited that brand in 2007 and pursued a photography and art career before returning to the fashion fold in 2012 at the creative helm of YSL, which he rechristened Saint Laurent to return to the initial impulses in the Sixties that drove the late, legendary couturier to introduce rtw.

Slimane was granted total creative responsibility for the brand image and all its collections, succeeding Stefano Pilati after a fruitful, if turbulent, eight-year tenure for the Italian designer.

From his home base in Los Angeles, Slimane overhauled the house with a new graphic identity; a widely copied store concept involving acres of veiny marble and gleaming shelves; and influential, mostly black-and-white campaigns lensed by the designer himself featuring a cast of music personalities and edgy models.

While he received some barbs from critics for repetitive collections inspired by grunge and other music subcultures, Saint Laurent under Slimane charted rapid growth, outpacing most other designer brands as the luxury sector entered a period of more moderate expansion.

Slimane has been floated as a possible successor to Simons at Dior, although sources close to the house describe such an appointment as unlikely, given his penchant for demanding a wide creative birth. At present, Dior has Kris Van Assche designing men’s wear, Victoire de Castellane in charge of high jewelry, Peter Marino masterminding the store architecture — and a host of famous ambassadors, including Jennifer Lawrence and Marion Cotillard.

Slimane is said to have coveted control over YSL’s beauty business, but did not hold any sway with the operation, controlled by L’Oréal, which acquired the business in 2008. As a result, he had distanced himself from its products and marketing messages.

He subsequently went on to work at Fendi and in 2009 launched his namesake collection in Paris, where he continues to show. Two years later, he scooped the ANDAM fashion award.

Impressed by his provocatively sexy and audacious styles, Donatella Versace in 2013 tapped him as a guest designer for her revamped Versus brand. Last September, she named him the creative director of Versus, putting him in charge of the men’s and women’s collections under her supervision. His first full collection was for fall 2015 retailing.

It was not immediately clear if he is to continue working for the Italian firm.

For his fall 2016 collection, he broke out of his short and sexy mold — slightly — by parading a more diverse collection whose floral prints on knit dresses verged on romantic.

Question marks around an eventual Vaccarello appointment include men’s wear, which he had only designed for Versus.