The only Scandinavian to present annually at Paris Fashion Week, the 43-year-old is notorious for performance shows that reflect his roots in music and fine art. 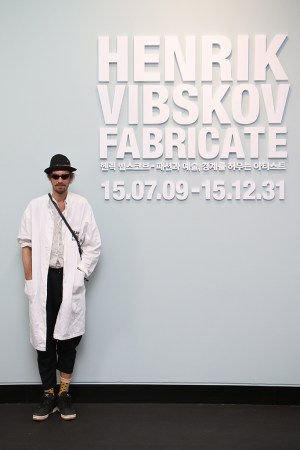 SEOUL — In one corner of the Daelim Museum in Seoul, elongated flamingo necks hang in a tribute to Guatemalan funeral rites. In another corner, dark fabrics envelop whole walls.

They are both installations by the Danish designer Henrik Vibskov, and while they might invite thoughts about death and survival, there’s also something deeply whimsical about his work.

“Maybe the only thing you’ll remember is the boobies,” said the 43-year-old Vibskov, laughing, about “The Big Wet Shiny Boobies,” one of a handful of signature pieces in the fashion-meets-art exhibition “Fabrication,” which opens Thursday and runs through Dec. 31.

Indeed, the pink, bubbly breast figurines crowding the space can give flight to the most tantalizing fantasies of adult anime lovers. Similarly, his expressionistic nude photographs take an unexpectedly comic twist when one discovers that some of them are of his 65-year-old neighbor, who likes to strut around in the buff.

The only Scandinavian to present annually at Paris Fashion Week, the designer is notorious for performance shows that reflect his roots in music and fine art.

“I want viewers at [my fashion show] to have a full experience, more of a 360-degree view than just a straight catwalk, to reflect other layers of the story,” he said. Though admittedly, “sometimes it becomes too much and takes away from the clothes.”

Undeterred by the recent outbreak of the Middle East Respiratory Syndrome — “I’m sure the museum would’ve told me if it was serious,” he said nonchalantly — Vibskov made his third trip here for one of the most comprehensive retrospectives of his work in Asia. “I love the food here, and I’ve seen some really good models,” he said.

In the solo exhibition, the Central Saint Martins graduate presents an overview of his career: there are pieces from his spring 2016 “The Hot Spray Escape” men’s collection, which was unveiled just a week ago in Paris; an installation of his multisensory fall 2008 “Mint Institute,” featuring mint scents, and props from his music performance evoking the spiritual meaning of eating, “Food Session.”

There also are pieces created specifically for the exhibit, including framed jigsaw wooden print blocks and knitted embroidery. “The material I mostly use is textiles and I try to use it in different ways from fashion to architecture and installation,” he said.

“You should see my warehouse. It’s full of so much more fun stuff,” said Vibskov, who found it challenging to scale down his work in the exhibition to fit the museum’s small rooms. The result is a mazelike theme park for adults spread across four floors, which allows viewers to navigate the thoughts of the artist-designer. “It’s more about the walk through these works,” he said.

“My entry into the creative world was through music and that was my first 15 years of being creative,” said Vibskov, who still drums and creates electronic tunes for his fashion/art shows. “I could have ended up in architecture or film. It’s a coincidence that I ended up [in fashion].

“[All these genres are] kind of from the same place in the brain, though with different perspectives,” he said. “I generally try not to analyze too much of what I’m doing. I’d rather think I’m a creative mind and not [label] myself an artist or designer.”

“Fabrication” features not only his works from the runway, but also a special performance featuring musical elements.

“I think it’s important that when you’re working on long projects, to do short ones, too. It could be good or a disaster because it’s so quick. But I need to tackle new subjects or feelings to get my brain activated. In Scandinavian you call this ‘going out on thin ice,'” he said, pausing for a moment and then adding, “What shall I do next to keep moving on thin ice?”