Under new creative guardianship, the brand's off-the-radar men’s line is set to play catch-up with its trendy sister. 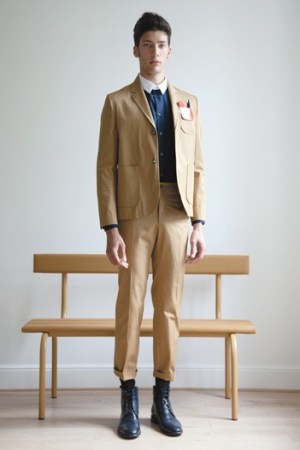 This story first appeared in the June 24, 2011 issue of WWD. Subscribe Today.

Henry, who since joining the house in 2009 has revived its women’s wear line, will present his debut Carven men’s line, dubbed Zero, to retailers at the brand’s flagship on Rue Royale here beginning today. The men’s line has been designed in-house since the departure of Ludovic Alban in 2009, who worked at the house for one season. Starting over under Henry, the line, which is sold in French department stores, will be distributed to a new network of stores.

Sharing the same genes as the Carven woman, the new men’s line carries democratic price points, urban Parisian references and playful high-low mixes, pairing city shoes with a pajama pant, for instance, or a tuxedo with sandals. However, Henry said he’s determined for it to have its own personality. “I don’t see it as the fiancé of the women’s line, but I like the notion of family ties; they were raised in the same house but each has their own sense of self,” said the designer.

The new collection has a schoolboy vibe, and features boxy jackets with shortened sleeves; striped shirts, and shorts inspired by cropped granddad pants, made from bonded cotton and wool to lend a little stiffness to the fit. One inky tuxedo jacket paired with a cotton tracksuit pant nods to work uniforms, while peach and apricot colors surface in the knits, including ribbed or cable-knit sweaters and short-sleeve cardigans. Henry said that he is the first person to test each garment. “I want to wear this.”

Taking its cue from the women’s line, the idea is to build the collection up slowly. Said Henry: “When the boy is big enough, we will put him on the podium.”

Meanwhile, the brand’s first full women’s pre-collection, dubbed Introduction, which will hit stores in early 2012, will be presented on July 7 at the brand’s showroom.