Alexandre Herchcovitch has opened a 485-square-foot store in Rio de Janeiro at the São Conrado Fashion Mall, his first unit in the city. 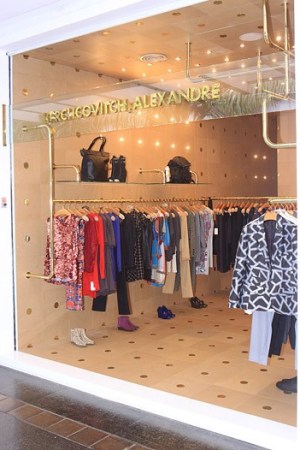 Alexandre Herchcovitch has opened a 485-square-foot store in Rio de Janeiro at the São Conrado Fashion Mall, his first unit in the city.

Herchcovitch, who is based in São Paulo, unveiled two units in Brazil’s capital city 12 years ago. The designer also unveiled a pop-up shop at Omotesando Hills on Omotesando Street in Tokyo, a shopping destination that’s been compared to New York’s Fifth Avenue. It will operate during the month of May.

Herchcovitch, who has shown his collection at New York Fashion Week for several seasons, is known for his bold prints and combining references as varied as Georgian and Armenian folklore with punk rock.

His Rio store will be ever changing. Nothing is nailed down in the small boutique. “We changed a lot of things, especially the way the collection is displayed,” Herchcovitch said. “There isn’t enough space to show the full collection. In the new shop, gold metal racks attach to and detach from the wall and can be reconfigured.”

Herchcovitch is learning the differences between the two Brazilian markets. “The customer in Rio is very different from the rest of the country and São Paulo,” he said. “Rio is very hot all year. In São Paulo, we have a couple of cold months. We opened the store in Rio with the winter collection. People are liking it but asking for lighter things. We are designing special pieces for the Rio shop.”

The designer plans to open six more stores in Brazil in the future and eventually to have no more than 10 units there.

Herchcovitch, who has a showroom in New York, said he’ll open a store in Manhattan in two or three years.

Two years ago, he sold 70 percent of his company to Inbrands, a group that owns six Brazilian labels. “We are using the expertise of Inbrands. We have more power to buy fabric, because they buy for the whole group,” said Herchcovitch.

The designer will continue to show his collection in New York. “I don’t see myself showing in another place,” he said. “I showed before in London and Paris. The strategy now is to be more commercial and more accessible to more people.”