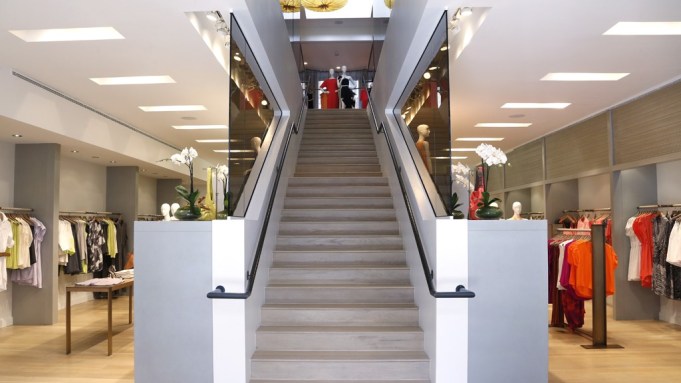 “I want to bring it up and up,” the brand’s chairman and chief executive officer said as the first freestanding Halston Heritage store, a 4,400-square-foot flagship, bowed last week on Madison Avenue between 83rd and 84th Streets.

This is the latest attempt to revive the brand, which has undergone a string of relaunches over the last decade with a revolving door of designers and management teams. Malka is taking a different tack, focusing first on the secondary line, Halston Heritage, and freestanding stores and then on a main line. The new store opened right in Roy Halston Frowick’s old stomping grounds. In 1968, the designer opened a salon further south on Madison Avenue.

The new flagship, all shiny brass logos on the outside and brightly lit spaces within, is the first of many the company plans to open and a template for future stores. Halston is targeting high-end shopping malls such as the Beverly Center in Los Angeles, where in three weeks a 3,000-square-foot unit will bow.

The so-called concept store will have runways with platforms for mannequins — whose faces were copied feature for feature from the Halston archives — and a bigger product offering. E-commerce will bow in 12 months, Malka said. A designer Halston collection will come when the timing is right, said Malka.

Other units will open this spring at the Somerset Collection in Troy, Mich.; Fashion Island in Newport Beach, Calif., and Scottsdale Fashion Square in Scottsdale, Ariz.

Malka said the company will open 11 Halston Heritage stores in 2013, with the goal of having 40 in operation in three years. “We’re targeting every major city,” he said. “We’re trying not to open more than one per city, with some exceptions, such as New York.”

Malka said a location has been secured in SoHo for a second Halston Heritage unit, but declined to reveal the exact address.

An international push is also under way. The first Halston Heritage stores outside the U.S. will open in the Middle East, in June in Kuwait, and Dubai and Jordan in November. China, Southeast Asia and India are also on Malka’s radar.

“The developing middle class feels like they missed some things in the last 50 years,” he said. “There’s lots of interest and some demand to sign and roll out all those territories. We’re finalizing a major territory now,” Malka said, but would not say any more on the subject.

“Europe has huge potential, but it’s so congested. We want to understand what their differences are.”

In the meantime, the company is learning about European consumers through retailers such as Harvey Nichols in London and KaDeWe in Berlin, which sell the brand through shops-in-shop.

Just two years ago, Halston was barely clinging to life. The company passed from owner to owner like a sartorial hot potato and a rapid succession of designers was hired and fired, including Randolph Duke, Kevin Hall, Craig Natiello, Piyawat Pattanapuckdee, Bradley Bayou, Marco Zanini and Marios Schwab.

Hilco Consumer Capital, one of the current owners, bought Halston in 2007 along with Harvey Weinstein and Tamara Mellon. Three years later, Hilco and Weinstein brought in Sarah Jessica Parker as a shareholder and president and creative director of the secondary label, Halston Heritage. Parker left the company in 2011, along with Weinstein.

“A lot of what was happening is that designers went back to the archives,” Malka said, adding the brand needn’t take a literal approach. “I think the misnomer is that what he [Halston] was known for” is the Studio 54 era. “He was part of the beginning of Americans having an influence on the fashion world. He took simple things and created luxury. He was the first designer to open a store with his name on the door.

Prices are a strong selling point of the collection. Shoes, made in Italy, range between $295 and $495. “Our handbags are priced like contemporary brands,” he said, holding up a stingray clutch. “It’s $495. A similar style in a designer collection would cost $1,200.

“Halston believed the last [body parts] on a woman to go are the legs,” Malka said. Hence, all the dangerous slits on dresses and gowns, priced between $595 and $1,500.

“You can see what Ben [Malka] has accomplished here,” said Jeffrey Hecktman, chairman and ceo of Hilco. “I’ve supported Ben through his vision. People told me to have a reasonably long-term frame of reference when investing in this brand. I paid $25 million for the brand [name] eight years ago. Ben saw the brand the same way I did. He has the capability, background and experience” to get it off the ground.

“We’ve invested a lot of money in our people,” Hecktman continued. “The quality, price point and fit of the product are all coming together. This is just the start. We have a lot we want to accomplish. The company is very well capitalized now.”

Malka, the former chairman of BCBG Max Azria Group, reportedly brought $20 million to Halston when he became ceo and is the largest of three investors. In addition to Hecktman, there is a silent partner.

If Malka believes Halston will be difficult to tend and grow, he’s not letting on. “This will be an important brand again,” he said confidently.