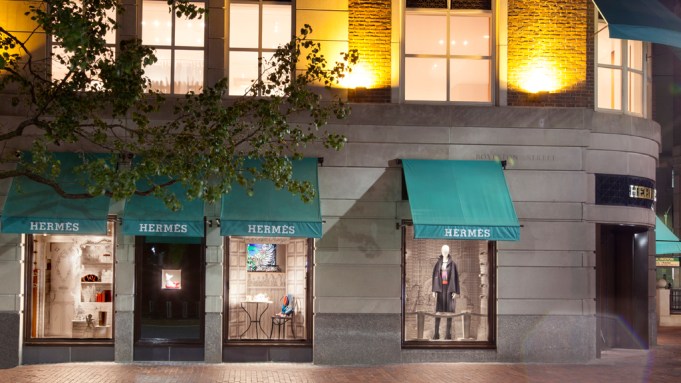 BOSTON — In the midst of a significant expansion of its U.S. store base, Hermès unveiled its refurbished flagship here Friday.

The store remains in the same location — 320 Boylston Street — but is now two stories and 8,700 square feet, more than double the previous footprint.

“Boston has always been a strong market for the U.S.,” said Robert Chavez, president and chief executive of Hermes USA. “Our business has grown exponentially over the past several years.”

That left Boston “in desperate need of an expansion,” he said. When adjacent space became available, the luxury house jumped at the chance.

Hermès has outgrown many of its smaller U.S. stores, not just in Boston. It’s a combination of sales growth and category growth; in particular, Hermès has experienced strong growth for its home métiers. The company will expand its selling space in seven markets this year: Washington, D.C.; Seattle; Boston; New York; Houston; Dallas, and Miami. Chavez cited D.C., Seattle, Las Vegas, and Hawaii in particular as “hot spots” right now.

Asked about a slowdown in Chinese tourism, Chavez wasn’t concerned. “We are still seeing some very qualitative traffic in our stores.”

In Boston, Chavez described the clientele as “very solid and loyal. Coupled with the strength of the college and university crowds, and adding in a strong tourist market, this market is one of the best,” he said.

The renovated store, located across from the Public Gardens, features a new, corner entrance for greater visibility and windows full of whimsical, storybook illustrations by artist Kyler Martz. In one, a mannequin strolls along illustrated Boston Harbor, past a seagull on a wharf piling.

It’s important for the brand to be “lighthearted and intimate,” said Maureen Baltazar, senior vice president, retail and merchandising, who attended the store ribbon cutting on Friday.

The store palette is warm, classic and clean (ivory walls and polished floors, honey-toned cabinets and clear glass) so that the eye absorbs the colors of house signatures: orange boxes piled at the cash wrap, scarves folded neatly in glass cabinets and stretched over lighted wall frames so that the colors glow.

The first floor has a men’s universe (including shoes, ties, hats and small leather goods) and a women’s (costume jewelry, scarves, and perfume, among other items.)

Baltazar highlighted the Evelyn- and Halzian-style handbags (one of the latter sold within the first 20 minutes of the Boston store opening), a leather bomber ljacket, and the Pierre Hardy-designed shoes as particularly successful.

Although customers were ready as soon as the opening ribbon fell to the shears, Hermès considers this a soft launch. The brand will host a more formal opening, with cocktails and dinner, in mid-September when the city’s wealthy clients are back from their summer vacation homes.