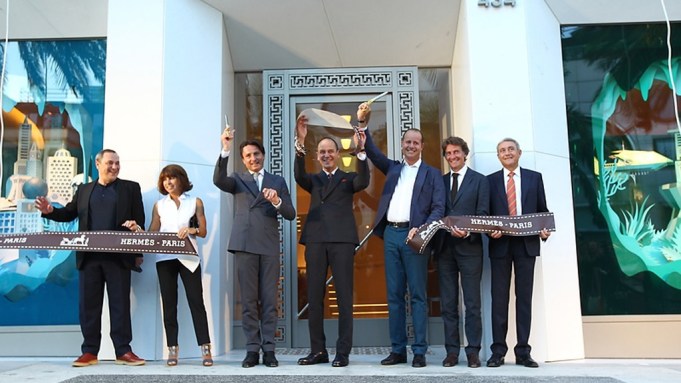 The French luxury powerhouse celebrated the store with a tremendous amount of fanfare over several days last week. On Monday, Axel Dumas, chief executive officer of Hermès International; Pierre-Alexis Dumas, artistic director of Hermès International, and Robert Chavez, president and ceo of Hermès USA, hosted a dinner to fete the opening at the Sunset Tower Hotel in West Hollywood, Calif., before waking up early the next morning to conduct a preview of the store and then later in the evening preside over a ribbon-cutting. If that weren’t enough, an after party Tuesday night at 3 Labs’ production house in Culver City, Calif., lasted into the morning hours on Wednesday.

During the preview of the store, a four-level, 12,000-square-foot space that’s the second-largest in size and volume in the U.S., Dumas traced the brand’s retail history in America starting with the opening of its New York store in 1929, an event that he half-joked practically bankrupted Hermès. The brand opened a 2,800-square-foot location at 343 North Rodeo Drive in 1972, but moved the store to 434 North Rodeo Drive in 1997, ushering in a flagship strategy.

In 2011, Hermès bought the building housing the store for a reported $75 million, underscoring what Dumas called the brand’s “long-term view” for its real estate, and embarked on a remodel under the direction of RDAI, the architecture firm founded by the late Rena Dumas that handles every Hermès store.

“It’s our idea not to construct Hermès of the past, but Hermès of the future,” said Dumas, talking about the renovations. He stressed the store reflects the diversity of Hermès’ merchandise and has been enlarged to incorporate its home products. The store also pays homage to light, an important characteristic of the brand’s retail designs, and light streams out of a membrane-covered skylight at the top of a white spiral staircase that sits at the center of the space. The façade is made out of white Carrara marble in an unusual touch for Hermès, which typically shies away from marble.

Hermès made a splash — at least virtually — with both the store and the after party to herald its arrival. For the party, the brand transformed a 30,000-square-foot production facility into a series of rooms that each provided guests different experiences. More than 600 people attended to wander through them, including Maria Bell, Petra Flannery, Jennifer Tilly, Jenni Kayne, Teresa Palmer, Loree Rodkin, Jessica Alba and Cash Warren, and Rosetta and Balthazar Getty. In one room, guests could become stars of a classic film taking a spin down Rodeo Drive in a vintage car. In another, artists were drawing cartoon images of them on iPads. In yet another, guests entered what appeared to be a pool with projections of water and a mosaic tile screen covering the floor. There was a performance with dancers dressed as swimmers to boot. Marveling at the pool setting, Chavez said, “I feel wonderful. I feel very fluid.” Explaining the concept of the party more generally, he continued, “We always love to marry the local community with the Hermès DNA. So, when we talked about what type of event we’d like to do, we started with the special scarf we have done [for the opening of the Rodeo Drive store] which is really looking at a swimming pool with the ex libris at the bottom of the pool. We have re-created the scarf in this pool. From there, we brought in other elements like the Hollywood studio, and there is entertainment all night long in each of the rooms.” Guests definitely took in the entertainment and stayed at the venue until 2 a.m., unheard of for L.A. partygoers who have well-earned reputations for getting to bed early.