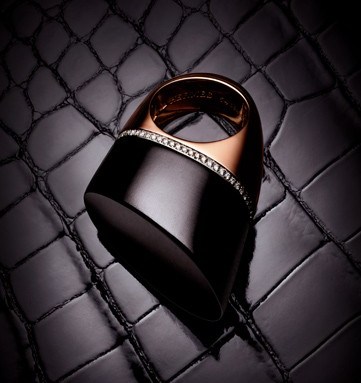 PARIS — With an exclusive collection designed by Pierre Hardy, Hermès has galloped into the world of high jewelry — just don’t call it that.

The French luxury group, best known for silver jewelry, is dubbing the 14 pieces “haute bijouterie” in a bid to distinguish itself from the couture houses and Place Vendôme players that traditionally purvey high-end baubles. Two years in the making, the pieces are less about precious stones than about bold shapes that draw from the house’s equestrian roots. The chunky Centaure necklace, bracelet, earrings and rings are inspired by horse’s hoofs, while the Fouet diamond necklace is shaped like a whip.

“Hermès is not a very precious universe,” Hardy explained in a room at Hermès that typically houses the firm’s collection of vintage objects ranging from trunks to rocking horses.

“I simply went back to its roots and to the horse’s hoof, taking the roughest, strongest, almost radical element and giving it the most feminine, the most modern interpretation.”

The Centaure ring comes in rose gold with a black jade or orange aventurine stone ringed with brilliant cut diamonds. Others are entirely paved with diamonds. The Fouet necklace, meanwhile, is made of platinum set with 3,669 diamonds, totaling 36.16 carats.

Hermès will be taking orders for the collection on a world tour that will stop in Tokyo in September, Hong Kong in October and Berlin in November, said Laurence Reulet, general director of jewelry. The waiting time is five to seven months, and pieces can be adapted to customers’ tastes.

Hermès chief executive officer Patrick Thomas cited rising demand for bespoke pieces. “It’s a trend which is also growing in each of our categories, but especially in jewelry,” he said. “Today, I would say it’s at least 10 percent of our business.”

The collection will be showcased in the windows of the Paris flagship at 24 Rue du Faubourg Saint-Honoré at Christmas, before resuming its travels.