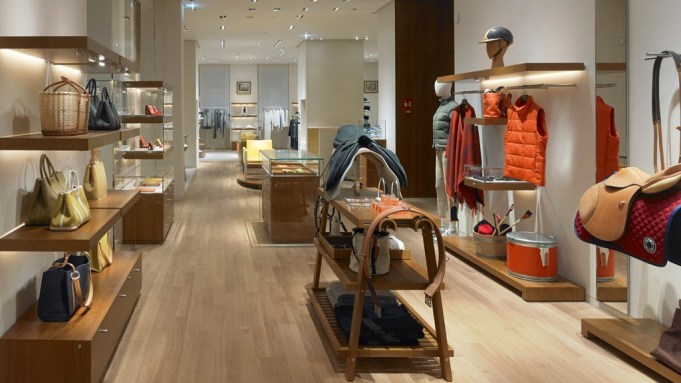 MILAN — After 26 years on Via Sant’Andrea, Hermès has changed its Milanese address, moving its flagship to Via Montenapoleone.

“We are little bit sad to leave Via Sant’Andrea, but we really needed to enlarge the store in order to display better the creativity of the company,” said Hermès co-chief executive officer Patrick Thomas, referring to the large space showcasing some of the company’s best performing product categories, including jewelry, watches, fashion accessories, textiles, furniture and equestrian, the fastest growing segment in Italy, according to Thomas. While he declined to give sales projection, Thomas said that “this store should become our second [largest] in Europe, right after the boutique on Paris’ Faubourg Saint-Honoré.” He also added that it “has been designed for the Milanese. We always want to talk to local people, because these are our loyal customers.”

Designed by architect Denis Montel, artistic director of Paris-based Rena Dumas Architecture Interieure, the bright and airy store is located in a neoclassical building with a beautiful courtyard which Hermès shares with Christian Dior’s boutique. It features four windows, decorated for the opening by two Italian artists who played with felt “to communicate the sense of lightness dominating the new maison,” said Hermès Italy’s general director Francesca di Carrobbio.

The first floor has a Venetian terrazzo floor with chips of amber, a color also appearing on the walls, along with a yellow tone paying tribute to traditional Milanese architecture. Here, Hermès scarves, custom jewelry and fragrances are displayed in a large area, conducting to another space dedicated to men’s ties, ready-to-wear and accessories. A curved staircase ushers customers to the second level, where Montel recreated a cozier and more intimate atmosphere pairing warm oak wood and soft carpet for the floor. On the right, there is a large area dedicated to women’s ready-to-wear and footwear, while the central space features oval and curved wood displays showing Hermès timepieces and fine jewelry. On the left side, the second floor has an area dedicated to equestrian accessories and small leather goods, along with corners for leather products and home wares.

To celebrate the opening, Hermès created limited-edition yellow items available exclusively at the Milan store. They include scarves, ties, boots, two bags, two armchairs designed by Antonio Citterio, along with a special version of its Le Flâneur d’Hermès lightweight bicycle.