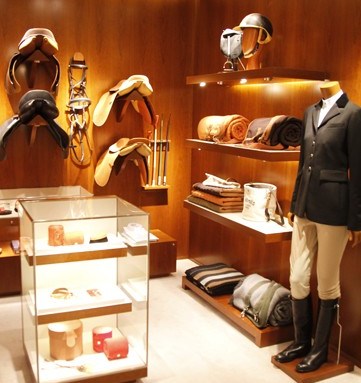 NEW YORK — Space optimization sounds too technical for a company that romances its products as Hermès does, but the newly remodeled 2,000-square-foot lower level of the Madison Avenue flagship is a case of just that.

Men’s ready-to-wear, accessories, ties and shoes were relocated from the lower level of the flagship to Hermès Man, which in February opened directly across the street, freeing up valuable real estate in the larger store.

“When we moved men’s out, we knew we wanted to create a leather floor,” said Robert Chavez, president and chief executive officer of Hermès of Paris Inc. “We wanted to show the breadth of the collection, how many products and colors we have. You can see the merchandise pop now. The main floor is always busy, especially during holiday time. We have taken a very busy floor and doubled the space. We could potentially double our business.”

Previously cramped categories, such as enamel, which occupied a 3-foot wall area on the main floor, now have the luxury of space. “We can improve our service to our clients now that there’s more breathing room,” Chavez said, noting that enamel “has become a very big business. In the U.S., it’s the third-largest product category after leather and scarves.”

There are new creature comforts on the lower level, including a special order room outfitted with butter-soft leather-covered walls, a leather banquette with low shelves on either side for resting handbags and a profusion of fresh flowers. “You can go there to talk about customizing a bag,” Chavez said. “It’s another way to enhance the experience of the house.”

Certainly no one ordering a $173,000 red crocodile-skin Kelly handbag with a diamond clasp wants other customers leaning over her shoulders, so there are also tables and chairs such as those used at jewelers for conversations between customers and sales associates.

Not everything is so high priced at Hermès. There also are entry-priced items such as bookmarks and key chains for $150. According to Chavez, small leather goods such as notebooks, BlackBerry cases and agendas have taken off.

Handbags, a key category for Hermès, previously received short shrift on the main level. “We had a wall that held nine bags,” said Chavez. “Now we’re showing over 100 different styles.” New collections include the Polochon, the revival of a handbag created years ago and the upcoming Toolbox handbag. There are new colors such as eggplant and emerald green for fall. A shelf of brightly colored handbags in a shade called bougainvillea was popular for spring, Chavez said.

Keen to promote its artisan heritage, Hermès created a work area for craftsmen on the lower level that invites curiosity, but is also discreet. On a recent day, Claude, who had worked in a little corner upstairs, sat at a cherrywood desk underneath the circular staircase, quietly restitching a worn briefcase. Another cornerstone of Hermès’ heritage, equestrian products has gained space for rtw, boots and riding accessories such as saddles, which retail at $6,100.

Hermès in May will open a store in Las Vegas and is looking at the Mall at Short Hills in Short Hills, N.J., for a 2012 launch, Chavez said, noting the company averages one to two openings a year.

“China is expanding more quickly than any other area,” he said. “The company continues to invest and it continues to grow.”