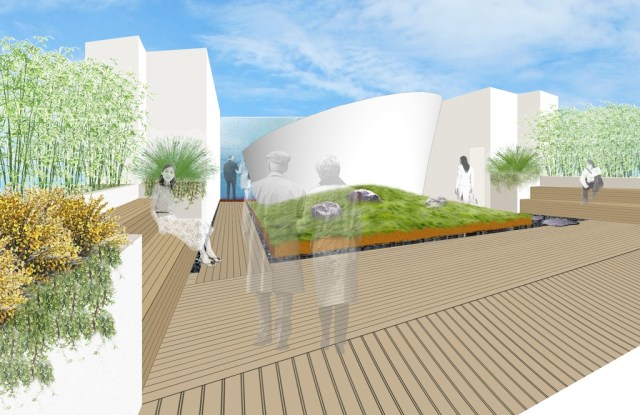 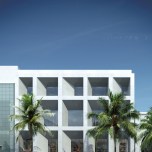 Hermès is spending big to expand in America.

This story first appeared in the August 20, 2013 issue of WWD. Subscribe Today.

The first of three major U.S. retail projects to bow, the luxury brand’s newly renovated Beverly Hills flagship, will open in September with twice the amount of selling space as its former incarnation. Everything about the 12,000-square-foot flagship is meant to broadcast modernity and luxury, from the Carrera marble facade — a departure from Hermès’ typical French stone — and gilt glass panels to Wi-Fi and a state-of-the-art telephone system.

Hermès in 2012 paid a reported $75 million to buy the property that houses the flagship at 434 North Rodeo Drive. “We decided to take advantage of the option [to buy the building], knowing the investment we were going to make in renovations,” said Robert Chavez, president and chief executive officer of Hermès USA. “The whole building was gutted and boarded up. We moved two doors away to a temporary location on the same side of the street. We didn’t lose any traffic or clients, although the space is significantly smaller. We’ve remained open during the construction period.”

Sources estimate the flagship’s volume will increase by 30 percent or more.

Hermès International has the deep pockets to fund its growth. For the second quarter ended June 30, the company logged an 11.8 percent increase in revenues to 910.4 million euros, or $1.18 billion, from 814.5 million euros, or $1.05 billion, during the same period a year earlier. The company in July raised its guidance for 2013 revenues and margins after reporting an acceleration in sales in the second quarter, aided by a strong performance in the U.S. and sustained demand in Europe and China. Total sales for Hermès last year were 3.5 billion euros (or $4.7 billion at current exchange). The U.S. represents 16 percent of the global total.

Hermès has a long history in Beverly Hills, having opened its first store there 41 years ago at 343 North Rodeo Drive. It moved in 1997 to its current location.

In addition to the Beverly Hills flagship, there are other projects in Hermès’ pipeline in American cities the company considers key.

A long-awaited location in Atlanta is nearing completion. Hermès in 2014 will open a 4,100-square-foot unit at the Buckhead Atlanta, a project that was originally scheduled to open in 2009 under the name Streets of Buckhead, but was halted as a result of the recession. Hermès moved out of the Lenox Square Mall in 2008 and into a temporary space, in anticipation of Buckhead’s launch.

A 12,000-square-foot flagship will open in fall 2014 in Miami’s Design District, where Hermès is building a three-story unit. The retailer in early 2013 left the tried-and-true Bal Harbour Shops for the grittier Design District, which is still building its following. Hermès is occupying a temporary location on N.E. 40th Street until the store, in a building not owned by Hermès, is completed. “It will be our third flagship in the U.S., along with Madison Avenue and Beverly Hills,” said Chavez. “It has major, major potential. We believe in the Miami market.”

Hermès also believes in potentially risky locations. “We were one of the first to sign [a lease] in the Design District,” Chavez said. “We don’t mind being pioneers in new and unchartered areas. Wall Street is a perfect example. We’ve been there since 2007, and it’s one of our most successful boutiques.” Hermès raised industry eyebrows when it signed the lease at 50 Wall Street, becoming the first luxury brand to open a store downtown. “The same applies to Atlanta and the Streets of Buckhead,” Chavez said, referring to the company’s leading spirit. “We prefer an open-air cluster of special shops versus a shopping mall that is perhaps not drawing the best high-end clients we seek. Our move into the World Financial Center [now called Brookfield Place] is another pioneering move for us.”

Hermès was one of the first retailers to sign a lease at Brookfield Place, which is scheduled to open in fall 2014.

With just 27 stores in the U.S., Hermès’ retail decisions are carefully calculated. New York is the one market with multiple stores, but “we would consider second locations at some point in the future in San Francisco and Los Angeles,” Chavez said.

“In Miami, the gravitational pull is more towards the city and downtown Miami Beach area,” Chavez said. “We are also able to offer a greatly enhanced selection of product going from just 4,300 square feet in Bal Harbour to 12,000 square feet on three floors in the Design District. This is also part of our strategy, to bring more assortment to our clients.”

Chavez said Hermès will expand “stores in many existing markets such as Dallas, Houston, Boston and Seattle. We’re adding square footage to be able to increase our product offering.”

That’s the concept behind the Beverly Hills expansion, where Hermès turned the third floor into a showcase for home products, from accessories to furniture. “Now we’re able to show the extensive offering we have,” Chavez said. “Before, we were so cramped for space, we didn’t have the proper way to showcase the collection.”

Hermès captured square footage by replacing a large, wide two-story atrium with a white marble and Venetian plaster circular staircase that rises from the ground floor to the new roof terrace. Looking up into the spiral, there appears to be a hole in the ceiling. Light streams in and at night, stars may be visible. The roofless roof is an illusion made possible by a membrane air cushion that invisibly covers the circular opening. “In the old store, the rooftop wasn’t usable,” Chavez said. “In this renovation, we decided to renovate it for a rooftop garden.” The store was designed by the RDAI, the company founded by the late Rena Dumas, who was the wife of the company’s former ceo, Jean-Louis Dumas.

All 16 “metiers” will be represented in the store and will command more space with enhanced displays. “The whole store is such a dynamic boutique that everything will be a focus,” Chavez said. “We’ve made a huge investment in all the categories.”

“Beverly Hills always had tremendous potential,” Chavez said. “Now, we’re giving it the opportunity to become a true flagship. It’s one of our highest-producing stores.”