“Moment and Eternity” is a collaboration between the fashion house’s arts foundation; the Singapore Tyler Print Institute and Japanese artist Shinji Ohmaki. 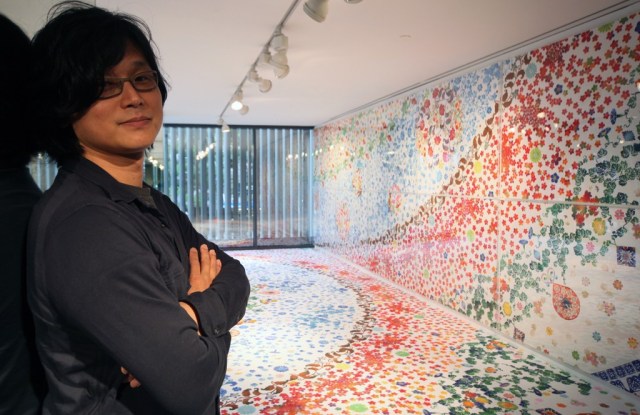 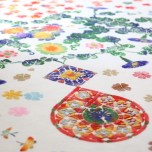 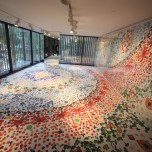 SINGAPORE — Hermès has turned the third floor of its Southeast Asian flagship into an interactive art installation created by Japanese artist Shinji Ohmaki.

The installation, titled “Moment and Eternity,” is a collaboration between Fondation D’Entreprise Hermès, the French fashion house’s arts foundation; the Singapore Tyler Print Institute (STPI), and Ohmaki. It is located at the Hermès boutique at Liat Towers here.

Tokyo-based Ohmaki laid short-hair carpet and white felt cloth across about 195 square feet of floor space and used a plastic stencil to litter multicolored pigments across it. On a nearby wall, he installed a 24-by-8-foot canvas marked with patterns he had created back in Japan. The result is two surfaces covered with between 80 to 100 patterns inspired by everything from flowers and butterflies to symbols found on Japanese kimonos.

The use of vibrant colors and cutesy patterns is reflective of several Japanese contemporary artists but “what’s most striking about Ohmaki’s installation is the opportunity it presents to visitors to interact with the work directly,” said Emi Eu, STPI’s director and the exhibition’s curator. Visitors will be allowed to walk onto the carpet and their footprints will help the patterns on it dissolve in Monet-esque Impressionist swirls, said Ohmaki while giving WWD an exclusive preview.

While visitors would be able to get a sense of what the original patterns were like by looking at the installation on the wall, “they can never go back to the past,” he said.

Ohmaki said that the installation was named in memory of the devastating tsunami and earthquake that hit Japan in March 2011. “We lost a lot in one moment due to the disaster and now have to make the effort to recreate things moment by moment,” he said.

Third Floor Hermès, which is used year-round as a noncommercial arts space, is one of six exhibition spaces around the world run by the fashion house. This is the 10th installation, all of which are site-specific, that Hermès has presented in the Singapore space.

Hermès will host an opening this evening and the exhibition opens to the public on Friday. It runs to June. 3.