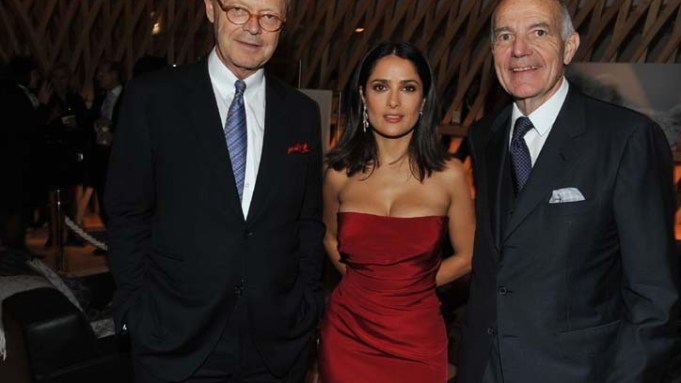 PARIS — Hermès International has opened its second-largest unit worldwide in a former swimming pool — and welcomed a surprising guest to its opening cocktail party: actress Salma Hayek, aka the wife of PPR chief François-Henri Pinault.

Her arrival at the event Thursday night caused ripples not only because of her short red Gucci bustier dress, but because of the context: Hermès has become embroiled in a media battle with luxury mogul Bernard Arnault since LVMH Moët Hennessy Louis Vuitton last month revealed its surprise acquisition of 17.1 percent of its shares.

Everyone knows the Pinault family emerged as the white knight that thwarted Arnault’s takeover bid for Gucci in 1999, but Hayek just shrugged her bare shoulders. “I don’t know about investment; I know about shopping,” she said, flashing a big smile.

Hermès chief executive officer Patrick Thomas posed gamely for photos with the Mexico-born beauty, yet downplayed the significance of her attendance.

“No, no, there is no message,” Thomas said. “We have always had a very good relationship with the Pinault family, for a long time. It is nothing new. They have always come to all our openings and they often invite us to theirs.”

A PPR spokeswoman confirmed that Pinault was invited to the party and has been at several Hermès events in the past. The executive was in Rennes, France, on Thursday night for the opening of a new location of Fnac, PPR’s chain of book, music and electronics stores.

Hayek said she attended the Hermès event on his behalf.

“She is a guest,” he deadpanned, adding the late Jean-Louis and Rena Dumas, the former Hermès ceo and his interior architect wife, were both close to François-Henri Pinault’s father, François Pinault.

Earlier that day, the two executives led tours of the 15,800-square-foot store at 17 Rue de Sèvres and tried to deflect attention from the LVMH saga and trumpet the unique character of the store: its first big splash on the Left Bank after 173 years on the other shore of the French capital.

Housed in a listed building from 1935, the multilevel unit houses everything from saddles to silk scarves, in addition to a florist, a small bookstore and a tearoom seating 30.

Creative director Pierre-Alexis Dumas said preserving the historic building’s Art Deco mosaics and ironwork balconies was a challenge, but a welcome one. “I have always thought that when creating something, the more restrictions you face, the stronger the creative response,” he said.

This includes brand-new wallpaper, furnishing fabric and carpet ranges, in addition to reeditions of furniture designed by Jean-Michel Frank for Hermès in the Thirties.

Hermès had operated a temporary space on nearby Rue de Grenelle since 2009, which recently closed to make way for the new store.

Thomas revealed that going forward, the luxury firm will open fewer stores but opt for larger spaces in order to showcase the full range of its offer.

He was confident about prospects for 2011 after what promises to be a record year for the company, both in terms of sales and profitability. Hermès posted a 30 percent increase in sales in the third quarter, fueled by strong demand for silk scarves, leather bags and watches, particularly in Asia.

“We won’t be able to maintain the same growth rate next year, but we should see double-digit growth nonetheless,” he predicted.

Thomas and Puech added that the Hermès clan had not yet decided whether to take additional measures to protect itself from their unwelcome suitor.

The family holds 73.4 percent of the capital in a structure they have described as immune to any hostile takeover, but they are reportedly mulling whether to group their shares into a nonlisted holding.

“The family is serene. There is nothing to add,” said Thomas. “No additional measure has been decided.”

However, he underlined that the new store was the boldest embodiment yet of the spirit of the house, which fiercely clings to its independence.

“The timing is perfect, because everything that asserts the singularity and difference of Hermès is welcome,” the executive said. “I don’t think a house like Hermès is capable of surviving in a universe controlled by money. This house has proved again and again that poetry is not incompatible with business.”