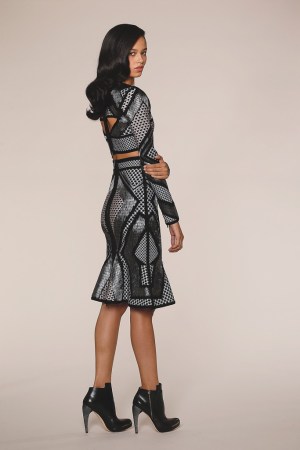 Max Azria refers to Hervé Léger as his “jewel.” But the company had a history long before Azria acquired it in 1998.

It began as a couture-only business founded by Hervé Peugnet in 1985. Karl Lagerfeld had advised him to change his surname to Léger, believing it would be easier for Americans to pronounce. The name Hervé Léger was trademarked that year.

The house ventured into ready-to-wear in 1993 and its viscose “bandage” dresses became an immediate hit, with sales soaring from $600,000 generated solely from haute couture in 1992 to $10.6 million in 1994, thanks to its ready-to-wear and the debut of a cruise collection. British Royal Serena Linley became a fan, as did the late Diana, Princess of Wales, who sported one of Léger’s backless dresses at Versailles. Nicole Kidman wore them in “Batman Forever.”

At first family-run, the house received much-needed backing in 1994 from Seagram Co. Ltd.’s Paris-based Champagne G.H. Mumm & Cie division, which also took a 50 percent stake in the company. This enabled its Paris runway shows to grow more lavish and its retail distribution to increase. A Paris boutique on Rue Faubourg Saint-Honoré opened in 1995.

In October 1998, Azria bought roughly 99 percent of the capital of Hervé Léger as well as the trademarked name from Seagram’s for an undisclosed sum. The beverage giant had put some $19.8 million into Léger over the course of four years, and the house had losses of $3.3 million to $4.1 million annually on sales of roughly $10 million wholesale, 40 percent of which was in the U.S.

“I see a lot of synergies between Hervé Léger and BCBG,” Azria said at the time, noting that he had been looking for some time to buy a French company that would enable him to grow in Europe and diversify into the designer category.

When Azria bought Léger, it was saddled with huge overhead, including ateliers for couture and a rtw staff of 31 full-time employees. But rather than cut back on overhead, since it is a rare asset to have such skilled in-house ateliers, Azria had hoped to compensate by growing sales fast.

He put in place a new president, Bernard Calvet, a fixture in French industrial circles known for his career at Shell Oil Co. The goal, Calvet said at the time, was to expand production from three collections annually — fall and spring rtw plus a cruise collection — to a total of seven. The house had a small private couture business, but Azria wanted to add two couture collections and two pre-collections. He also opened stores in Los Angeles, Paris and New York.

In April 1999, Azria ousted Léger, saying, “I gave a chance to the designer. I bought the company because I believed that it could be profitable, and I had the vision that we could turn it around. We gave Hervé the opportunity to express himself and be the best he could be. We reinforced the infrastructure. But the whole new team in place could not work with [him].

“We know what we are doing,” Azria added. “At the end of the day, the bottom line is the product you put on the table. The Léger collection will be more modern, more sophisticated, and the concept will be recognized as the spirit of the sexy woman. This is what the consumer wants and expects.”

That same month, Azria named knit specialist Eric Sartori as head designer, but Sartori quit in October 1999, less than a month after showing his first collection. Léger couture designer Jerome Dreyfuss, who showed his only couture collection for the house in July 1999, also departed, in November 1999.

(For his part, designer Hervé Léger launched a collection and a Paris shop in 2000 under the moniker Hervé L. Leroux — another suggestion from Lagerfeld.)

The Léger brand went on hiatus until it returned to retail in 2007 under the design direction of Max and Lubov Azria, and it made its debut at New York Fashion Week in February 2008 as Hervé Léger by Max Azria, showing the fall 2008 collection.

WWD’s review read: “With a new generation of Hollywood starlets pouring their Pilates-toned bods into Hervé Léger’s signature bandage dresses, Max Azria decided to present his first Léger runway show since acquiring the company. Yet instead of resting on Léger’s laurels, Azria worked to make the bandage look his own with some variations in knits and a palette of pretty dégradés. He decorated many with a variety of feathers and silk organza appliqués, but at times got carried away. This is a look that’s best left unadorned, as exemplified in a parade of 15 full-on bandage dresses, all of them cut up to here and plunging to there.”

Said Lubov, “The bandage dress is a true innovation because there’s nothing like it in the market. There are no patterns. The individual bandages are dabbed with pins and sewn together by hand. So basically, it’s a labor of love. As much as you see the product everywhere, it’s not made in large quantities. Sometimes we only make two of a style but the most we make is 100. It’s a very focused business and to work with one type of yarn is so challenging, and yet amazing.”

Since then, Lubov has endeavored to innovate the materials and the styles.

“To have that brand and to work on that brand is such an honor, and we respect it, and I think that’s the reason we are able to innovate it constantly,” she said.

They have tried to make some less body-conscious pieces, such as A-line skirts, but other design elements, like raglan sleeves, were left on the drawing board.

“We tried so many different silhouettes, but with bandages, unless they are really close to your body, they don’t look that attractive.

Still, she insists a woman need not have a model figure to carry off a Léger.

“Most people say it’s about body shape but I think it’s about confidence level. What’s great about Hervé Léger is when you put that dress on, it changes everything. People look at you differently.”

She is also trying to include more daywear and separates in the collections.

“If we are going to grow the brand, we need to grow it so a woman can wear it at different times. We are really focusing on separates, whether it’s a cool full-needle T-shirt or a great jacquard sweatshirt or fantastic legging, so that the [customer] can start building more of a wardrobe.”

Today, Hervé Léger is sold in 92 wholesale doors and has 13 boutiques in the U.S.: in Southern California on Rodeo Drive; at Westfield Century City mall; on Melrose Avenue, and in South Coast Plaza; in New York’s SoHo and on Madison Avenue; in Las Vegas’ Miracle Mile Shops and The Venetian; in Florida’s Palm Beach and Aventura; Atlanta; Troy, Mich., and Paramus, N.J.

Said Lubov, “Hervé Léger to me is always at the forefront of fashion. That woman knows what she wants and how she wants to look.”