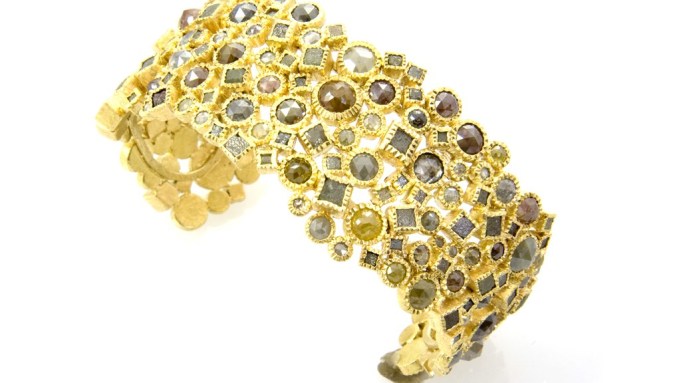 Everyone knows about Place Vendôme jewelers, but what about the hidden, edgy designers who are hanging diamonds on cord and carving up pearls?

That’s the subject of French author Olivier Dupon’s latest tome, “The New Jewelers.” Released in the U.S. this week, it spotlights 108 designers from 19 different countries, categorized into nine chapters ranging from “Cool Luxury” to “The Avant-Gardists.” Published by Thames & Hudson, the 288-page book features 800 photographs and sketches.

“It’s about showing people the talent that’s out there, that you may not have heard about, but that is a real alternative to the big names,” Dupon said in an interview at the Café de Flore in Paris, adding he wanted to give a platform to “independent jewelry designers who are doing really wearable pieces instead of something that you will never be able to afford or that [belongs] in a museum.”

Though Dupon’s compilation does include plenty of new discoveries, the barometer he used was “people who are new with regard to either their creative approach or technique.”

Take Todd Reed from Colorado, who uses raw diamonds exclusively. “He rejects extreme faceting and illusory perfection. By treating the diamond as nature intended it, he redefined what luxury could be,” Dupon explained.

Buzz worthy, too, are the creations of Melanie Georgacopoulos, a Greek jeweler with a fancy for pearls. “She cuts, drills and slices them. It’s pretty harsh treatment actually; some people think it’s blasphemy to do that with pearls, but she really rejuvenated their image. She did not get rid of the elegance, she took it to the 22nd century,” he said.

Formerly a production manager for Christian Dior and a buyer for the 3 Suisses catalogue, Dupon said he scouts for talent in shops and magazines while traveling. “When I’m in Asia, I will buy 10 fashion magazines.

I don’t understand a word of it, but when an image strikes me, that’s it,” he said.

Dupon characterized his reference book as a road map to individual expression. “Uniformity is everywhere, but people are looking for an identity, and I believe jewelry has a role to play here,” he said. “You can totally self-express [with jewelry], there is no age or size appropriateness — unlike in fashion.”

Asked about trends, Dupon said mixing precious with semiprecious stones is clearly on the rise and no longer seen as taboo. “It’s still precious jewelry, but wearable on an everyday basis,” he noted.

Dupon also appreciates technical inventiveness, citing as an example Esther Assouline, a French designer of Moroccan origin who has revived the ancient art of gold chiseling and is believed to be the sole practitioner. “It’s a very energy- and time-consuming technique, but absolutely stunning, because each piece is charged with a human touch and vibe,” he said. “It’s a way to stand out in the crowd. The trend is to be different.