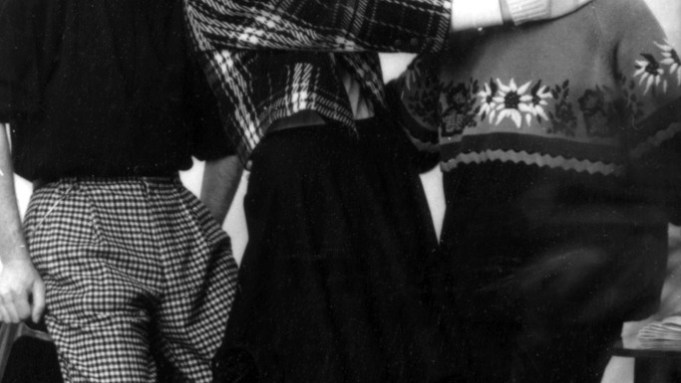 In the mid-Eighties, when Keith Varty and Alan Cleaver were designing for Byblos, the Italian brand owned by Sergio and Donatella Girombelli was riding high. Their playful mixes of colors and patterns won many fans, and their clothes were mainstays at top retailers.

“We bought it by the truckload,” said Jon Weiser, who, with his mother Selma and sister Barbara, owned and ran the influential Upper West Side group of Charivari stores at the time. “It stood out from all the other collections because it represented a different attitude, with looks such as the floral shirts and the funny T-shirts. It really had all the bells and whistles. It was accessible, with a good mix of sensibilities, Sergio’s Italian industrialist with [the designer’s] quirky British sense of humor.

“There were so many ways to buy it,” Weiser added. “I think we did appreciate it. We did events together, and it sold fantastic for us. There were always wonderful knits, and the price points were better than those of a lot of the Japanese [labels] we carried at the time. This was just easy and more fun.”

His sister Barbara echoed his thoughts, recalling, “It was very important. It had enough style to distinguish it, but not too much. It was affordable. My mother was very, very fond of them [the designers].”

“I think that it offered a little bit of a younger slant, and a sense of humor, so that men’s fashion wasn’t so serious,” said Gene Pressman, who ran his family’s store, Barneys New York, during that period. “In that time, there were Giorgio Armani, Basile and Gianfranco Ferré. Although I don’t like comparisons, [Byblos] was sort of like an Italian Kenzo.”

“I think they really stood for color, for fun, for exoticism; it was a phenomenon,” said John Bartlett, who became the Byblos designer after Richard Tyler — who had succeeded Varty and Cleaver, who departed in 1993 — left. “They were incredibly talented, with a sense of whimsy. Their show in Milan was always the hot ticket. It was a mix of English eccentricity with Italian craftsmanship.”

Varty and Cleaver were known for their fabric combinations, pastels and bright colors and motifs such as flowers that didn’t often appear in men’s wear at the time. “Men are accepting new concepts, like the way new fabrics go together, like damask and prints,” Varty, who died on April 12th, told DNR in 1985.

He then went on to describe their most recent collection: “the decadent mixing of flowers, checks, stripes and polka dots, but basically keeping it all in traditional men’s wear colors or putting a blazer on top.”

At another point, he noted, “The Italians…don’t have the tradition for the funny little things, like the Scottie dogs.

“Men’s wear in Italy was so horrible when everybody was doing all that sportswear,” Varty added. “We knew it was the right time to dress up again, because everything was so awful, so colored and so out of control.”

In the same interview, the two remembered their early days in a shoebox apartment “like Tutankhamun’s tomb.” “I could never sleep because there was a crazy woman who lived downstairs with her mother, and one of them moaned all night,” Varty recalled. “Years later, when I moved into a much larger apartment, I ran into her on the street. I asked her, ‘How’s your mother?’ She just laughed and said, ‘I killed her.’”