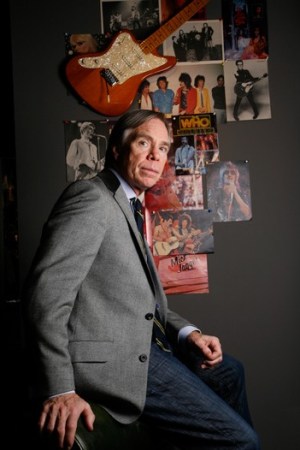 This story first appeared in the November 25, 2008 issue of WWD. Subscribe Today.

With that notion in mind, the designer on Monday unveiled his first denim store here, a 3,200-square-foot unit with 10 arched windows overlooking the buzzing Corso Buenos Aires shopping strip. “Rich or poor, young or old and regardless of size and heritage, denim is for everyone and a staple,” said Hilfiger, sitting in a vintage moss green leather armchair in his new space. “It will always be a necessity, even with a crisis.”

The shop also features a new decor that evokes Hilfiger’s 1969 store in New York called People’s Place, which also served as a rendezvous for musicians. “It’s a more global version of People’s Place, but the music inspiration is fully blown out here,” said Hilfiger.

The walls bear signs of the designer’s rock infatuation with electric guitars that are fixed onto rusty metal grids, while posters of Elvis Presley, David Bowie and the Rolling Stones are plastered here and there.

Towering over a curved wenge wood table with vintage stools is an unusual chandelier made of old microphones whose grilles are replaced by lightbulbs.

Hilfiger’s seventh denim unit in Italy also carries footwear, bags, belts, outerwear and watches. It’s housed in a three-floor palazzo from the early 1900s and fans out on the ground floor, while the first and top levels accommodate a showroom and offices. First-year sales forecasts were unavailable.

That premium jeans are the store’s purpose is clear from the moment customers step inside and are greeted by a giant mirror, framed by cabaret-style lightbulbs, flanked by metal shelves filled with stacks of folded jeans. Between number of styles and washes, there are about 150 variations to fit all palates.

A capsule collection called Rock Scene will join the range of offerings starting in December. It was presented during the Bread & Butter trade fair in July in Barcelona and is codesigned with Hilfiger and Tommy Ramone, drummer of the Ramones. Its distinct punk-rocker bent comes from black zipped leather jackets, printed T-shirts in black and white and faded skinny jeans.

“I was inspired by the rock and hippie movement of 1969, and this store is the culmination of those years,” Hilfiger said, pointing to the leather-bordered denim curtains. “We like our stores to evolve, but this is the one we pushed the farthest in music terms.”

Asked to highlight the differences between American and European denim consumers, Hilfiger noted that the latter prioritize quality over price, but added that the U.S. mentality is increasingly following suit. “All the denim here is designed in our European headquarters with the best fabrics and washes in the world,” he said. “We spare nothing in terms of research and development [of the product].”

Click here to view more photos of the Milan flagship.