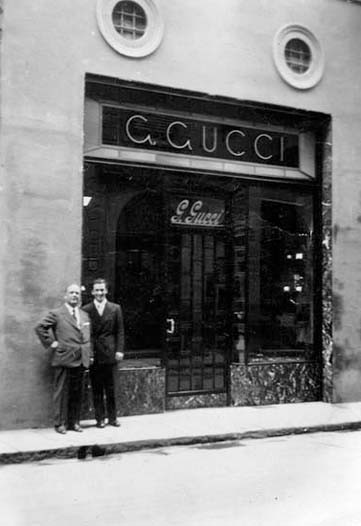 1902: He returns to Florence and joins the leather manufacturer Franzi.

1921: Guccio opens his first stores in Florence on Via Vigna Nuova and then Via del Parione.

1935 to 1936: As a result of a League of Nations embargo against Italy, Gucci finds alternatives to imported leather and other materials. It develops a specially woven canapa, or hemp, from Naples, printed with the first signature print — a series of small, interconnecting diamonds in dark brown on a tan background. Gucci’s first successful suitcases are made from it.

1947 to 1948: Production of leather goods resumes after World War II. Aldo Gucci introduces the pigskin, which becomes a signature house material. The first bamboo-handled bag, inspired by the shape of a saddle, is thought to be produced in this period.

1948: Maurizio Gucci is born to Rodolfo and his wife, Alessandra.

1951: Rodolfo opens the first Milan store, on Via Montenapoleone. Around this time, the green-red-green web becomes a hallmark of the company.

1953: Gucci becomes a pioneer of Italian design in the U.S. when Aldo opens the first American store in the Savoy Plaza Hotel on East 58th Street in New York.

The Gucci loafer with metal horsebit is created.

1960: The New York store moves to a Fifth Avenue address next to the St. Regis Hotel at 55th Street.

The bag that Jacqueline Kennedy is seen with is renamed the Jackie. Around this time, the GG logo is applied to canvas and used for bags, small leather goods, luggage and the first pieces of clothing.

1966: The Flora scarf print is designed for Princess Grace of Monaco.

Maurizio Gucci, son of Rodolfo, goes to work with his uncle Aldo in New York, until 1982.

Around this time, the brand is hitting its fashion stride. A store dedicated to clothing opens at 699 Fifth Avenue in New York, while 689 Fifth Avenue focuses on shoes, bags, luggage and accessories.

1981: Ready-to-wear parades for the first time at the Florentine fashion shows at the Sala Bianca, playing heavily on the Flora print.

1985: The iconic loafer is displayed at the Metropolitan Museum of Art in New York and becomes part of the permanent collection.

1993: Maurizio Gucci transfers his shares to Investcorp, ending the family’s involvement in the firm.

1994: Tom Ford is appointed creative director. His first collection, for fall 1995, focuses on jet-set glamour and is a critical and commercial success, putting the label back at the forefront of fashion.

1995: Domenico De Sole, previously chief executive officer of Gucci America Inc., is appointed Gucci Group’s ceo. He immediately begins reining in licenses, franchises and secondary lines to reverse a decade that saw overexposure of the brand and cheapening of its image.

Maurizio Gucci is gunned down by a hit man commissioned by his ex-wife, Patrizia Reggiani.

1996 to 1997: Ford’s collection of white cutout jersey dresses fastened with abstract horse-bit belts sets the sleek, sexy, modern style of the house’s look in the Nineties and establishes it as a brand dedicated to evening glamour — and consequently attracts hordes of Hollywood actors and actress.

1999 to 2000: The Jackie bag relaunches in many colors and variations, triggering a huge and sustained response. It opens the era of the Gucci “It” bag.

2004: Ford and De Sole leave the company when they and parent PPR fail to come to terms over a new contract. John Ray takes over men’s design; Alessandra Facchinetti takes women’s, and Giannini becomes creative director of accessories.

Robert Polet, the head of Unilever’s $7.8 billion frozen-food division, trades ice cream and fish sticks for handbags and stilettos as the new ceo of Gucci Group.

2006: The company signs a long-term licensing agreement with P&G for the production and worldwide distribution of its fragrances.

2007: The first TV ad campaign runs. It is for the Gucci by Gucci fragrance and is directed by David Lynch.

2008: Gucci opens the New York global flagship in Trump Tower on Fifth Avenue. The company celebrates with an event co-hosted by Giannini and Madonna — “A Night to Benefit Raising Malawi and UNICEF.”

The renovated Rome flagship is reopened. During the celebration for the 70th anniversary of its Roman store, the 2009 cruise collection show is live-streamed on the Web site.

Gucci by Gucci Pour Homme, the first men’s scent created by Giannini, makes its debut with actor James Franco starring in the ad campaign. The house also renews its eyewear licensing deal with Safilo until 2018.

Flora by Gucci, Giannini’s second women’s scent, launches and the iconic Jackie bag is given a modern interpretation and dubbed the New Jackie Bag.

The label enters the Indian retail market via a joint venture with the holding company of local entrepreneurs Reena and Ashok Wadhwa, taking a controlling 51 percent stake in the new firm.

2010: A sporty, contemporized version of the Bamboo bag, the New Bamboo; the new Gucci 1973 line of bags, and the Gucci by Gucci Sport Pour Homme fragrance and Gucci Guilty women’s scent all launch.

The Singapore Paragon store reopens, and the city-state celebrates Giannini with a special orchid, the Paravanda Frida.

2011: The company prepares to celebrate its 90th anniversary.