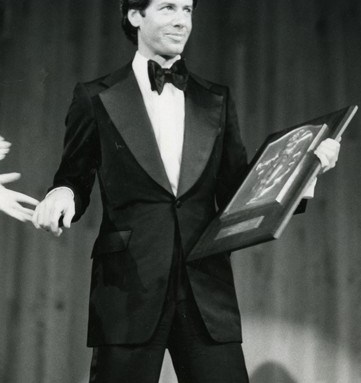 The past four decades at Calvin Klein Inc. have been full of groundbreaking moments, and some much-publicized personal escapades.

1973
• The label unveils a complete line of women’s sportswear. At a time when American fashion is on the rise and Halston is its king, Klein makes his mark with his beautiful coats and his clean-cut, all-American sportswear.
• Klein receives his first Coty American Fashion Critics’ Award.

1977
• Klein’s daughter, Marci, is kidnapped on her way to school on Feb. 2. The designer immediately delivers the $100,000 ransom and Marci is returned. Her kidnappers — her babysitter, Paule Ransay; Ransay’s half-brother, Dominique, and his friend, Cecil Wiggins — are arrested two days later.
• Studio 54 opens, and Klein becomes a fixture, along with the likes of Liza Minnelli and Andy Warhol.

1979
• Brooke Shields, age 15, is featured in the Calvin Klein Jeans advertising campaign, saying the now-infamous words, “Want to know what gets between me and my Calvins? Nothing.” Calvin Klein Jeans becomes a denim juggernaut.
• Calvin Klein Cosmetics Co., owned by Klein and Schwartz, launches its first fragrance, called Calvin Klein.

1980
• The Minnetonka Corp. buys rights to produce Calvin Klein cosmetics for $1 million, stock and ongoing royalties under a license to use the Calvin Klein mark.

1982
• The designer expands with Calvin Klein Underwear for men, triggering another phenomenon by launching the designer-branded intimate apparel category.

1983
• In October, Klein publicly rebuts growing speculation about his health, denying to WWD that he is dying of AIDS.

1988
• The designer adds the Eternity fragrance, and taps Christy Turlington as the face of the Richard Avedon-shot campaign. The move catapults Turlington to supermodel status, and kicks off a long-term collaboration between the model and the designer.
• Klein checks himself into the Hazelden Foundation rehab center to undergo treatment for reported alcohol and prescription drug abuse.
• Carolyn Bessette starts working at a Calvin Klein store in Boston.

1989
• The Minnetonka Corp. is sold to a subsidiary of Unilever plc.

1992
• Klein enters the bridge category with ck Calvin Klein women’s apparel.
• Klein turns Kate Moss into a household name with a series of underwear ads featuring Moss with “Marky” Mark Wahlberg, and the slogan, “The best protection against AIDS is to keep your Calvins on.”

1993
• Moss poses nude in Obsession ads, drawing much attention — both negative and controversial — for her waifish frame.

1994
• In an unprecedented marketing move, Klein launches the first unisex fragrance with ck One, replete with a striking black-and-white commercial featuring Moss and a slew of downtown types.
• Warnaco Group acquires Calvin Klein’s underwear business and mark. Warnaco is also granted a men’s small leather goods/accessories license.
• Gabriella Forte is named president and chief operating officer of Calvin Klein Inc., joining from Giorgio Armani, where she had been responsible for Armani’s U.S. operations.

1997
• Calvin Klein Inc. joins with Swiss watchmaker SMH for a license for the sale of Calvin Klein watches (SMH changes its name to The Swatch Group Ltd in 1998).
• Klein launches the fragrance Contradiction.

1999
• Polo Ralph Lauren defeats plaintiff Calvin Klein Cosmetics Co. in a lawsuit claiming that the bottle for Ralph Lauren’s Romance fragrance is a knockoff of Calvin Klein’s Eternity packaging.
• Klein comes under fire for an ad campaign featuring children in underwear. Considered by some to be child pornography, the Mario Testino-shot photos caused a nationwide outrage. While Klein had dabbled in controversial ads before, most notably with a seemingly undernourished Moss evoking heroin-chic images in Obsession, this campaign backfired: The brand nixes plans to unveil a billboard in Times Square during fashion week.
• Gabriella Forte resigns from Calvin Klein Inc., and Tom Murry becomes the company’s president and chief operating officer.

2000
• Klein is presented with a plaque on Seventh Avenue’s Fashion Walk of Fame.
• Klein sues his biggest licensee, Warnaco, for federal trademark violations and unauthorized distribution of CK Jeanswear product, demanding the license back. Warnaco fires back with a counterclaim in June, charging CKI with ongoing and intentional breach of its obligations to Warnaco under several licensing agreements. Warnaco also sues CKI and the designer, personally, for defamation and trade libel arising from comments he made on the “Larry King Live” show.

2001
• Just days before the start of a jury trial in federal court, CKI unilaterally ends Warnaco’s Calvin Klein Jeanswear license, filing papers in a Manhattan state court declaring the company has the right to end the license. Seven days later, on Jan. 22, Klein and Linda Wachner, Warnaco’s then-chairman and chief executive officer, literally kiss and make up after reaching an 11th hour settlement. Terms of the settlement are not disclosed, but Warnaco is given the Calvin Klein Jeanswear license until 2044.
• Klein adds rugs to his home collection.

2003
• Phillips-Van Heusen acquires Calvin Klein Inc. from Klein and Schwartz in a deal estimated to be worth as much as $700 million: $430 million in cash, with additional payouts of as much as $270 million in the years to follow. Klein and Schwartz each immediately pocket $215 million in cash and stock from the deal.
• Klein steps down as chief designer and becomes consulting creative director. Schwartz leaves the company to focus on his role as chairman of the New York Racing Association.
• The company’s Collection design team is helmed by the trio Francisco Costa for women’s wear, Italo Zucchelli for men’s wear and Ulrich Grimm for accessories. In the fall, the new designers present their spring 2004 lines. Kevin Carrigan, creative director of women’s and men’s Calvin Klein white label and ck Calvin Klein, also unveils his collections.
• Russian model Natalia Vodianova becomes the new face of the brand.
• Calvin Klein makes an unplanned on-court appearance at a New York Knicks game at Madison Square Garden, approaching Knicks bad boy Latrell Sprewell midgame as he is preparing to throw an in-bounds pass. Klein is escorted away by security and, a few weeks later, checks into rehab.
• CKI signs a deal with Kellwood Co.
and a new company, G.A.V., to launch Calvin Klein better sportswear in the U.S. and relaunch the ck Calvin Klein bridge women’s sportswear.
• Vestimenta takes over the production for Calvin Klein Collection under license.

2006
• CKI decides not to renew Klein’s three-year consulting agreement and, as of February, the designer no longer has any formal relationship with the company.
• Costa wins his first CFDA Womenswear Designer of the Year award.
• The company unveils its new show space, an 8,600-square-foot venue
that can seat up to 600 people on the ground floor of its headquarters at 205 West 39th Street in New York.
• Moss returns to Calvin Klein with the fall ad campaign for Calvin Klein Jeans, shot by Mert Alas and Marcus Piggott, and also featuring actor Jamie Dornan.
• Klein and Kelly Klein divorce.

2008
• PVH takes the Calvin Klein Collection license back in-house from Warnaco, which had acquired it from Fratini (which succeeded Vestimenta).
• Costa receives his second CFDA Womenswear Designer of the Year award.
• The company opens its 10th better specialty retail store at the Americana at Brand in Glendale, Calif.
• CKI switches its better licenses from Kellwood Co. to G-III Apparel Group.
• The company adds e-commerce to its Web site, calvinklein.com.
• CKI celebrates its 40th anniversary with a bash inside a John Pawson-designed structure allowing visitors access to New York’s much-anticipated High Line park project.