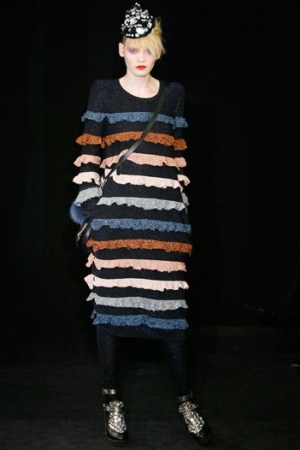 The collection is to be launched Dec. 5 in 1,500 H&M stores worldwide, and also at Rykiel boutiques — the first time a guest designer for H&M will do so. The French firm counts 44 boutiques worldwide, along with 52 shop-in-shops.

In another first, the collaboration with Rykiel will continue into the spring season, with a knitwear line for women and girls, accompanied by accessories. This second collection will be launched in around 250 H&M stores on Feb. 20.

Since the opening of her first boutique here on the Left Bank in 1968, Rykiel’s designs have become known for their exuberant, coquettish style and have been worn by the likes of Lily Allen, Vanessa Paradis and Michelle Obama, among others. Rykiel’s trademarks include colorful stripes, a preponderance of black and especially knitwear, which has become synonymous with the brand.

Sonia Rykiel’s daughter Nathalie, who is the president and artistic director of the fashion house, told WWD the lingerie and knitwear would be “unmistakably Rykiel.” She also pointed out her mother was the first designer to deliver a capsule collection for mail order catalogue 3 Suisses in the Seventies, in a bid to “democratize the brand.”

“Women want things that aren’t too expensive,” she added.

The H&M partnership arrives at a key time for Sonia Rykiel, as the French fashion house is looking to raise its profile via brand extensions and a bigger retail footprint.

Nathalie Rykiel said she’s looking for a new partner for Sonia Rykiel lingerie, after its previous licensing partner, SIL Group, liquidated earlier this year, as well a new partner to create a fragrance to express the insouciant feminine image of the brand. At present, Selective Beauty holds the beauty license. “I am looking for the best partner for the perfume,” she said.

Rykiel is also angling to broaden distribution in the U.S., where Sonia Rykiel only has two boutiques — one in New York and the other in Boston. “We have the kind of style that women want,” Rykiel asserted. “Our house has grown and today it needs a boost.”

Rykiel’s next project is the November launch of an e-commerce site in France, where customers will be able to shop for the brand’s signature knitwear and playful accessories. The plan is to expand online sales to American, Japan and the U.K. next year.

Since Nathalie Rykiel joined the family-owned company in 1975, the house has expanded to include the lines Sonia by Sonia Rykiel, Rykiel Woman, Rykiel Enfant, shoes and accessories. Its most recent brand extension is for furnishings textiles, a license with Lelievre.

Sonia Rykiel is the latest in a long line of designer collaborations for H&M, which have included Stella McCartney, Karl Lagerfeld, Rei Kawakubo of Comme des Garçons, Viktor & Rolf and Matthew Williamson.

In June, the Swedish firm unveiled a deal with red carpet shoemaker Jimmy Choo to design a one-off collection of shoes, bags and ready-to-wear. It goes on sale Nov. 14.