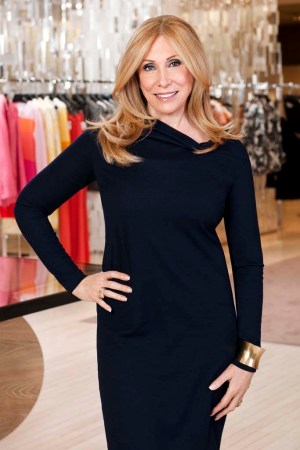 Sources: Pucci Tapped an LVMH Insider as Its Next Designer

From her 28-year perch at Holt Renfrew — the last 10 as vice president of fashion direction — Barbara Atkin retired this month, having witnessed tectonic shifts in the retail and fashion industries.

The fashion mainstay reminisced recently with WWD about it all: the reign of supermodels, the changing of the guard at key fashion houses and the continuing fascination with celebrity culture.

She oversaw men’s and women’s fashion at the Canadian retailer, embracing the digital world and advocating for a holistic approach to fashion that takes health and wellness into account.

Atkins and her husband are moving to L.A. from Toronto, but she expects to stay in fashion in some capacity.

“I probably never will leave the industry, it’s part of my DNA. This whole new chapter is opening up with a family in Los Angeles and a little girl so far away,” she said, referring to her daughter, son-in-law and granddaughter, Ty Sienna Smith, who was born in April.

“I had a wonderful platform to watch customer behavior and make sure Holt’s was relevant to their lifestyle,” said Atkin, who was a proponent of seasonless fabrics for Holt’s citizens-of-the-world consumers, and a champion of the “wear now” clothing movement.

“Rick Owens was a big business for us,” Atkin said. “We brought [Nicolas] Ghesquière before he started at Balenciaga. I’ve loved pioneering. I’ll miss walking into a showroom or a small little atelier at the top of a staircase and looking at a designer and saying, ‘This designer is going to make a difference in the 21st century.’”

Atkin had a front row seat to history-making fashion moments.

“I’ve met so many unbelievably creative people,” she said, citing Michael Kors and Donna Karan. “I was a friend of Oscar de la Renta. I saw Yves Saint Laurent, the man, himself. I was at his final show. I knew Moschino. I remember Jean Paul Gaultier in the Nineties when Madonna walked the runway bare-chested. I saw Tom Ford passing the baton. I remember his last show when all the white roses came down. I was at Raf’s [Simons’] last Jil Sander show and his premiere show for Dior.”

Atkin has her favorites, such as Dries Van Noten, whose “shows are so romantic. I used to say Marc Jacobs changed the world of fashion in seven minutes — the length of his shows. And Alexander McQueen used to take us to the muddiest places outside Paris and we’d all be cursing.” While Atkin knew all of the designers, she “didn’t make a point of becoming really good friends with any of them because there’s a business side to this as well. I was not intimately friendly with anyone.”

She said she dislikes the “old notion of retirement” that implies a sedentary life or having a bucket list that needs to be completed within a decade. “I’ve always lived life with curiosity,” she said.“There are a lot of places I want to go to, one of which is India. I want to go to China, which is a new place of discovery. I want to see Africa. I want to go off the beaten path.”

At Holt Renfrew, she led the peripatetic life of a fashion director, traveling to Europe twice a year with the fashion pack. “I made the fashion capitals of the world my home for 28 years,” she said.

But the collections were never a chore for Atkin, who managed not to get jaded. “When we would go through the crowds and get to our seats and the lights would go down, I’d get that heartbeat,” she said. “The first season after I retire, I might get a bit of anxiety about not going to the collections.”

Atkin started her career as a teacher in the Seventies. She left education in 1978 to help a young Canadian designer, Wayne Clark, get his collection off the ground.

Clark’s studio, which was filled with fabrics and sketches and always had music playing, “brought something out in me,” Atkin said. In the early Eighties, she worked at licensing firm Moda Corp. She represented Canadian designers and worked in the areas of public relations, marketing and special events until 1978, when Holt’s hired her as fashion communications manager.

Now the fashion market north of the border is starting to come into its own.

“All of a sudden Canada is the new frontier and new stores [are] coming in,” Atkin said, referring to Nordstrom, which recently opened two stores in Canada, and Saks Fifth Avenue, which is arriving next year. “We’re going to share a big landscape. That will make us a little sharper. We know our customer. At the end of the day, the biggest luxury is having less choice. We get rid of the clutter and get rid of the noise so you can come to a beautifully curated store and trust that the edited collection is the right one for you.

Atkin had a mandate to put Holt’s on the international map, which she succeeded in doing. “From the Nineties to the digital world to the 21st century, I’ve watched things change so drastically,” she said. “It’s an exciting time to move on and leave with my eyes wide open.”