Home on the Grange

"What is this?" asks Jacques Grange in French, frowning at an amorphously shaped vase the marketing team of the Mark Hotel has placed in a model apartment,... 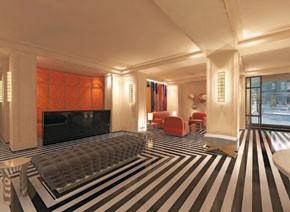 “What is this?” asks Jacques Grange in French, frowning at an amorphously shaped vase the marketing team of the Mark Hotel has placed in a model apartment, which is otherwise mostly Grange’s design. The 63-year-old French interior designer immediately sets to work, moving all the decorative objects they put in place just before his visit.

Such attitude is well earned by a man who counts Yves Saint Laurent, Caroline of Hanover, François Pinault, Valentino and Aerin Lauder among his many private clients. Until recently, regular folk could only catch glimpses of his work in glossy magazines. But now, with his first hotel on Manhattan’s Upper East Side, the public will be able to get a taste of the Grange-designed life — albeit the public that can afford room charges of $1,000 a night.

The project is the brainchild of real estate marketing honcho Louise Sunshine, who Grange has dubbed “the godmother.” She first worked with him on One Beacon Court, the residential tower that faces Bloomingdale’s. Such commercial ventures are not Grange’s usual fare — and indeed, it took Sunshine a while to get him on board.

“She felt that I was not interested,” says Grange of her original attempts to hire him. “I was a little afraid. I had the attitude, ‘Ooh la la, that’s not for me.'”

“I am not the kind of person who takes no for an answer,” says Sunshine, who traveled to Paris and paid a surprise visit to the designer in his office to win him over. “Jacques had never done a commercial property before,” she remembers.

Grange soon acquiesced. “After the first project, finally I realized, ‘Oh, it’s a good idea to design a tower,'” he says, laughing.

In the case of the Mark, Grange says he was impressed by developer Izak Senbahar, whose Alexico Group is also responsible for Richard Meier’s 165 Charles Street. “I’m lucky to work with him,” he says. “I’m sure many projects are not this high quality.”

For the Madison Avenue hotel, which will reopen this summer after a two-year renovation, not only did the designer take on regular decorating duties like conceiving color schemes and picking out tiles for the bathrooms of the 118 hotel rooms and 42 apartments, but he also consulted on the interior architecture and designed custom furniture for the hotel and all but 10 of the residences (those will be sold unfurnished). The residences, though, have somewhat fallen victim to the struggling economy and sales have been slow; so far, Sunshine claims, a third have been sold.

Grange also designed the Bar Mark and the expanded Sant Ambroeus restaurant, which will service the hotel.

“We worked from the beginning on the architecture, everything,” says the dapper designer in his heavily accented English as he sits next to Pierre Passebon, his partner of two decades. Passebon — the owner of Galerie du Passage, a prestigious design gallery in Paris — also contributed to the Mark: He helped choose the photography hanging in the rooms and will run the Galerie Mark on the building’s first floor. In addition, he picked out one-of-a-kind furniture pieces that will decorate the lobby, from designers like Vladimir Kagan, Guy de Rougemont and Vincent Corbière.

It’s the first time the two have worked together, but luckily their tastes agree. “It was very natural and easy. We tried to give a certain aesthetic,” says Grange, who is the more vocal of the two.

But even under such conditions, Grange realized there are challenges with working on such large-scale, commercially driven projects. “I pushed for the high ceiling, trying to get the maximum,” he says. “It’s not easy. I also tried to have big bathrooms, but in New York, the bathrooms are often very tiny.” He succeeded, to a certain extent: In the apartments, ceilings range from 9- to 10-and-a-half feet, while bathrooms achieve a trompe l’oeil effect with black-and-white-striped marble floors.

And though Grange used his signature materials, like mohair velvet upholstery for couches, as well as lots of glass and leather on the custom-designed desks, there are still some big differences from his work for private clients. “Normally when you do private work, you have only the couple or one client alone. Here you have many opinions,” he says, laughing.

“We have 42 buyers, not one buyer,” Sunshine points out about the apartments for sale, so she advocated for lots of light and not too many patterns. “You have to consider your market. I always go for the more neutral.”

In that, surprisingly, she agrees with Valentino, whose New York apartment Grange just finished last year. “Jacques is amazing,” says Valentino, who asked the designer for a more modern feeling than in his other, more exuberant homes.

Explains Grange, “He wanted it to be glamorous, of course, but with more light and plain walls to hang his collection of contemporary paintings.”

As for Saint Laurent — who Grange has known for decades, since they were all going to “the 54,” as he calls it, with Andy Warhol — Grange and Passebon still see the now-reclusive designer. “He goes out for dinner and we have a good time,” he reports. “He is not a depressive and I am happy for that.”

For his part, Grange remains sanguine about his popularity among the bold-faced set: A group including Christian Louboutin, Tory Burch, Muriel Brandolini and Kalliope Karella feted his Mark project recently with a dinner at Sant Ambroeus. “I don’t know how it happened, it’s naturelle,” he sighs, considering his many friends. “It’s part of the life, no?”