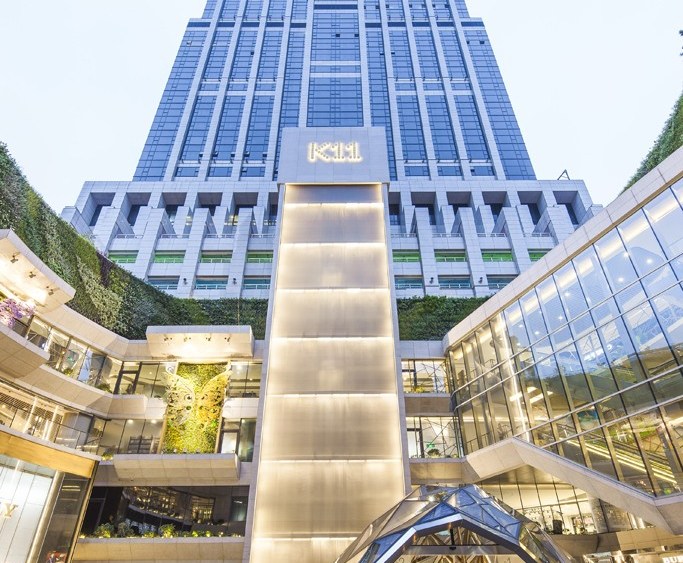 SHANGHAI — Despite slowing economic growth and an oversupply of commercial property that some analysts warn is forming a bubble in the sector, Hong Kong real estate tycoon Adrian Cheng is forging ahead with plans to open nearly 24 malls across China over the next six years.

Cheng believes his retail concept is one that will attract a growing segment of young, moneyed Chinese consumers seeking individual style and a unique shopping experience. The executive director of both the Hong Kong-based New World Development Co. Ltd., which already operates 40 department stores in 18 cities across China, and Chow Tai Fook Jewelry Group Ltd., Cheng is the mastermind behind K11, a novel retail concept that intertwines green spaces with art installations and luxury shopping. The first K11 art mall opened in Hong Kong in 2009. This year, he introduced the concept in China with the first K11 property in Shanghai, which celebrated its grand opening on Friday. He said there are plans to build 19 art malls in 11 cities across the country by 2020.

Existing shopping malls in China are “boring, boring, boring,” Cheng said. Chinese consumers “want something different” and are “fed up” with retail centers that are carbon copies of each other.

K11 is a break from the status quo. The 424,800-square-foot Shanghai property, located in an upscale shopping district on Huaihai Road, features a gigantic artificial waterfall on its exterior, complete with fake water sounds and bird chirping to create “the feeling of an urban jungle,” according to the company. Inside, installations ranging from digital art to a sculpture by British artist Damien Hirst surround the boutiques of brands ranging from Burberry and Chloé to Dolce & Gabbana and Vivienne Westwood. On the third floor, there is a vegetable garden.

The Shanghai K11 Art Mall had a soft opening in January, and so far, Cheng said, business has been good. Around a million people visit the mall monthly, and retailers are on average generating sales of $32,000 to $65,000 a day, he said.

All this indicates that even though consumer sentiment might be shaken by a weakening Chinese economy, people are still buying luxury products. “Overall, I think the sentiment is actually picking up in the more affordable luxury and the more premium ultraluxury,” Cheng said. “So far our shops are doing well. Hopefully the momentum will continue.”

He added that the days of “irrational” Chinese consumption appear, at least for now, to be over. “Retail is suddenly becoming much more rational and normal,” Cheng said. “Before it was crazy. It was a frenzy.”

Brands with the strongest sales among Chinese consumers, particularly consumers who are young, have money and have traveled, are those with strong value propositions and consistency across markets. Cheng said consumers are being bombarded now with information about brands’ heritage and craftsmanship, which means players in the market will have to work even harder to create a distinct identity. “There is an overload of data about heritage, about storytelling, about history,” he said. “Customers in China need to be able to visualize the brand goal, which means if you are talking about a certain brand, you can imagine a certain girl and what type of personality she has. They need to envision that.”

He also said Beijing’s efforts to curb official graft will have an impact, yet at the same time, consumer habits are changing, which could lessen the blow to the luxury sector. Shoppers are buying luxury much more for personal use now, rather than for gift-giving. “People are getting much more individualistic,” he said. “They don’t want to tell people they are rich. They want to tell people they are sophisticated. They don’t want to buy a very expensive thing just to show off. They want to buy it because it is worth it.”

A 2012 McKinsey study found that Chinese consumers are rapidly changing, “attaching much greater importance than before to emotional considerations such as whether products enhance their feelings of individuality and fulfill needs for self-expression.”

The second K11 art mall will be built in Shenyang, a city in northeastern China. Out of 20 cities surveyed by Jones Lang LaSalle, Shenyang has the highest shopping mall vacancy rate. A CBRE study released last year found that the city had the most active mall development in China in 2011.

Cheng projects two trends unfolding in China’s mall development. In some second- and third-tier cities, there will continue to be an undersupply of retail space, while in cities where too many malls have been built, there will be consolidation. “Some of the commercial developers will realize they cannot find international brands because they don’t trust the developer and brands are not expanding as much,” he said. “So they will become mass [market] and then will be competing with department stores, so eventually what they will do is sell.”

As luxury brands especially become more and more selective in where they choose to expand in China, there will be increasing demand for malls that offer prime space, quality service and unique customer experiences, he believes. “We actually predicted that this was going to happen,” Cheng said. “We tested the water in Hong Kong and then began to expand into China because we believe China is much more urgent due to the evolution of consumers.”