By Amanda Kaiser and Kate Whitehead
with contributions from Tiffany Ap
on January 21, 2016
View Slideshow 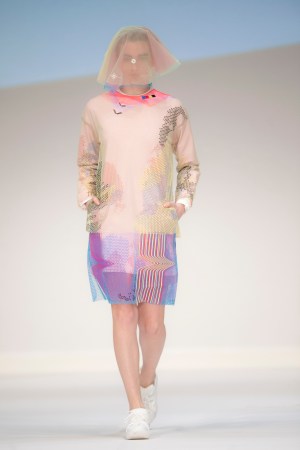 “Everybody is struggling to survive,” said Gagan Khullar, director general at Barcelona-based importer Cotton Connection. “It’s OK. It’s not bad but it’s not like before.”

Hong Kong Fashion Week is first and foremost a trade show offering up booths of everything from silk scarves to intricately embroidered eveningwear. But it also features a series of group runway shows for local brands and young designers. A fashion show for Taylor Swift’s clothing brand was a novelty for the fall edition of the event, held at the Hong Kong Trade Center.

Overall, the feedback was mixed. Some fair participants lamented the rising cost of producing and buying goods in China and a lack of compelling, original designs at the event. On the upside, others said they made valuable finds and contacts for their businesses.

Jenny Meng, overseas market manager for Guangzhou-based export/import firm Amazing Fashion International, said she was disappointed with the offerings in terms of denim.

“We are looking for some denim suppliers but we didn’t find the right one,” she said, adding that she hopes to have better luck at Magic in Las Vegas next month.

Meng deals in jeans and juniors handbags. Although handbag sales have suffered in the downturn, the jeans business is doing very well and is currently two times the size of last year’s, she said.

Shahid, of Lahore-based Nagina, made his first trip to Hong Kong Fashion Week. He said he was pleased with what he found. He was on the hunt for new fabrics and silks, although he was just collecting contacts rather than actually placing orders.

“I think China is doing [well] in yarn-dyed fabric,” he said.

Khullar, from Spain’s Cotton Connection, was less charitable. He has come to the fair for 10 years now and he said he places fewer and fewer orders every season.

“Everybody has got the same thing here,” he said.

Khullar, who deals in women’s apparel, said it is getting harder and harder to justify sourcing in China. With the rising costs, he said he is thinking of shifting more manufacturing to places like Spain, Morocco and Portugal. He also lamented the timing of Hong Kong Fashion Week in late January, which creates a crunch just a few weeks ahead of Chinese New Year in early February.

“They don’t have any time to make samples,” he said.

For their part, Chinese manufacturers seem to be focusing on quality to justify higher price tags and stay competitive.

“The Chinese want more elegant things, they appreciate that the fabric is from Europe. The Chinese don’t talk so much about price like the Europeans — they want quality. Our minimum order is 3,000 pieces. We’ve had a Chinese buyer want to make a very large order and if they do that then we let them put their label on it, make exclusive,” she said.

She Kev Yan, a designer with evening dress-maker Kaiqi Garments, also stressed the importance of targeting the upper end of the market.

“We are also facing competition from places like Vietnam and India that are making things cheaply and offering a cheap price. We can’t make things that cheap, so they beat us on price and some customers go to them,” she said. “But customers more concerned about quality — like our buyers in Turkey — they keep coming back to us.”

Young designers looking to broaden their distribution and international profile were upbeat about their experiences at Hong Kong Fashion Week.

Alex Law, the designer behind the sustainable fashion label Alex Leau, said the event ushered in new opportunities for his brand.

“The fair has been really good for exposure and getting my message out there. I try to be environmentally aware and up-cycle end-of-roll textiles,” he said. “Because of being here this week, I’ve been invited to shows in Beijing and Shanghai; more people know about me and what I do.”

Shirley Wong, who was showing the second season of her new brand called From Clothing Of, said she made contacts with buyers, which was promising — even if it did not result in any orders yet.

“The fashion show [gives me] more exposure,” she said.

Similarly, Mountain Yam, who runs his own three-year-old brand called 112 Mountainyam, said the fair is more about making contacts than placing orders. He said the buyers at Hong Kong Fashion Week tend to run chains of stores and place large orders. They often prefer to see the full collection in a showroom setting rather than just look at a few samples on the trade show floor, Yam said.

“Each time we have new customers,” he said.

Lyan Lin, buying director for The Fashion Door in Guangzhou, said she found some interesting brands, including Demo, Kenaxleung, Lapeewee and From Clothing Of. She said she has no plans to buy those brands now but she will keep an eye on them.

“Most of the Hong Kong designers put a lot of emphasis on commercial viability. The degree of wearability is high but [they] can lack distinctive style and originality.”

– Feminine takes on tartan and textured knitwear from Shirley Wong of From Clothing Of.