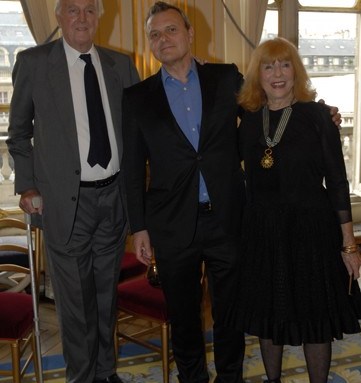 Hubert de Givenchy, Kenzo and Azzedine Alaïa aren’t known to make the rounds on the party circuit, but they were part of an all-star turnout last week in Paris when Bettina Graziani was presented with the medal of Commander of the Order of Arts and Letters.

In presenting the honor, Frédéric Mitterrand, France’s minister of culture and communication, told Graziani: “You became the emblem of a certain French idea of fashion.” Discovered by Jacques Fath, Graziani served as a model for designers such as Chanel, Valentino, Lucien Lelong, Givenchy and Alaïa, and inspired lensmen like Robert Capa, Henry Clarke, Irving Penn, Henri Cartier-Bresson and Pierre et Gilles.

Mitterrand also noted how Graziani was the first to throw her support behind Alaïa when he was an up-and-coming star. (Graziani donated her collection of photographs to Alaïa. Those images are on display at the Savannah College of Arts and Design’s Atlanta campus through June 25.)

“You are, in a word, the embodiment of the modern woman, the woman who has inspired, and continues to inspire, generations of women — the woman who is truly the future of mankind,” Mitterrand said.

On Thursday, Graziani said, “It was very touching because I had so many friends there including some who had come from abroad. The list of people, it was like my whole life was there. It was official but very friendly and that is very rare.”

Recalling her unofficial induction, Graziani said, “After the Liberation, I came to Paris in 1944 and started to work because I had to. Everything was possible then. It still is. The fashion world is so wonderful. It never stops.”

Mitterrand told last week’s gathering how Graziani “crystallized femininity” in the “Bettina Blouse,” the high-necked, ruffled design Givenchy named for her in the early Fifties, as well as the designer’s Amarige perfume. “You have kept your promises of beauty, your generosity and your sense of sharing,” Mitterrand added.

All in all, the celebration was a lot to take in, said Ruben Toledo, who was in the City of Light finessing illustrations for Louis Vuitton. “Everywhere you turned there was someone big. They were all there for Bettina,” he said.