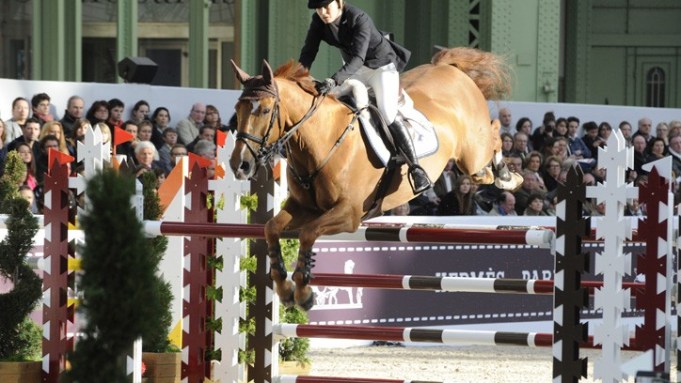 Reconnecting with its roots as a harness manufacturer, Hermès hosted a show-jumping competition under the 11-story glass cupola of Paris’ Grand Palais on Saturday.

“We are picking up an old tradition,” said Hermès artistic director Pierre-Alexis Dumas, who wrote an undergraduate thesis on the Grand Palais, which had been home to annual horse shows until 1957. “This used to be the paddock area,” Dumas explained, pointing to the area just beneath the grand staircase. “Hermès also had a shop here in those days.”

Reigning Olympic champion Eric Lamaze, European champion Kevin Staut and world number-one ranked Pius Schwizer were among those competing in the Saut Hermès competition, which ran through Sunday. Staut and his partner Pénélope Leprevost completed faultless rides, leading the French team to victory and the 100,000 euros ($135,000) in prize money.

After nightfall, riders from the Academy of Equestrian Arts led by famed horse trainer Bartabas staged a dazzling display that culminated with a pack of 30 horses, including 12 of the cream-colored Lusitanians favoured by King Louis XIV, galloping full-throttle beneath the blinking glass-and-steel structure.