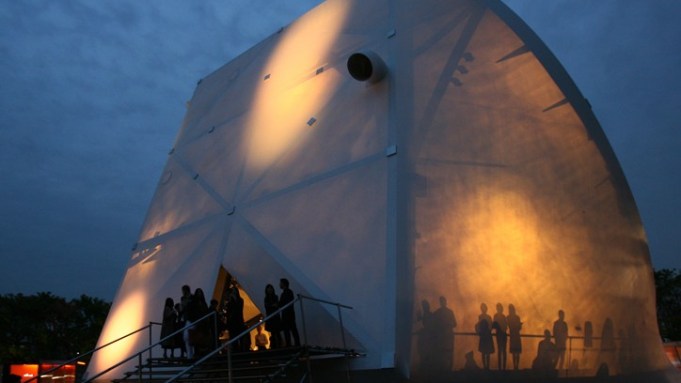 SEOUL — Perhaps the only Korean celebrity missing from Prada’s party Thursday night in Seoul to mark the launch of the Transformer project was Kim Jong-il. But the North Korean dictator, a noted film buff, no doubt would have enjoyed a soiree full of actors on the grounds of a 16th-century Korean palace. Celebrities rubbed shoulders and clinked Champagne glasses with designer Miuccia Prada and Prada’s chief executive Patrizio Bertelli.

The duo came to Seoul with Rem Koolhaas, whose Office for Metropolitan Architecture designed the tetrahedron-shaped structure. The Transformer will sit on the grounds of Seoul’s Gyeongui Palace until the fall. The juxtaposition of traditional Korean architecture with a 160-ton steel structure with a white polyvinyl chloride membrane, which when lit from the inside gives it a translucent quality, was striking. The Transformer can be lifted and rotated in an hour in order to create a different shape and interior.

Korean fashion designer Andre Kim and actors Kim Min-hee, Yoon Eun-hye, Song Hye-kyo and Oh Ji-ha and other guests seemed to revel in Prada making Seoul, for one night at least, the epicenter of a major Italian fashion house. Korea is Prada’s fourth-biggest market in Asia. The company is spending $10 million on the Transformer project.

“Activities like the Transformer will probably happen in other cities in Asia,’’ said Bertelli, who is also thinking of taking the Transformer back to Milan. “The culture is used to luxury and new things, much more than countries where we are already established.’’

Guests at the party wandered through the Transformer to view about 100 skirts on display on a hexagon floor plan, part of the house’s “Waist Down” exhibit. When the exhibition of skirts ends on May 24, the structure will be picked up and rotated to create a rectangle, which will show movies selected by the Mexican film director Alejandro González Iñárritu from June 26 to July 12. Art will then be shown when the structure is rotated again to create a floor plan in the form of a cross. Finally, the Transformer is picked up once again and rotated to form a circle for a fashion show. All shows are open to the public and free of charge.