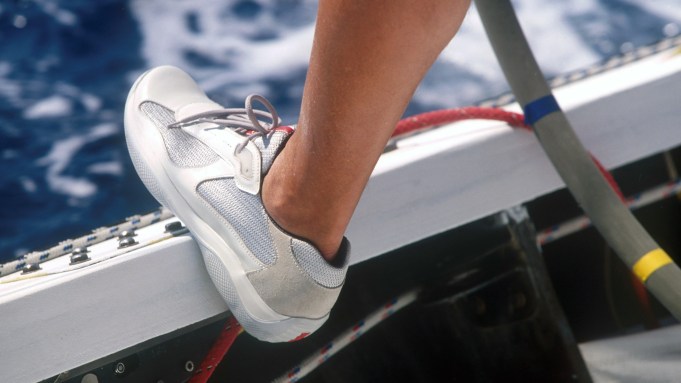 A light gray rubberized sole with rounded edges, a leather and mesh upper, and two unmistakable red lines running down the heel and the tongue. These are the details that helped turn Prada’s America’s Cup sneakers into footwear icons in the late Nineties and early Aughts.

Long before Balenciaga’s Triple S and Alexander McQueen’s chunky-soled sneakers were a thing, Prada developed a distinctive and defining sportswear-tinged style that has stood the test of time as an inaugural example of the luxury sneaker trend.

Originally known by their product code PS0906, the Prada “America’s Cup” — as consumers have nicknamed them — debuted in 1997 as part of the Linea Rossa technical collection of high-performance apparel and accessories, not to be confused with the Luna Rossa line, named after Prada’s sailboat.

They have been featured in a range of exhibitions, including the 2003 showcase “1950/2000 Theater of Italian Creativity” curated by architect Gae Aulenti in New York, and most recently in “Playground — The Design of Sneakers,” an exhibit at the Musée des Arts Décoratifs in Bordeaux, France.

The sneakers stemmed from an intertwining personal passion and entrepreneurial intuition.

As the story goes, in the afternoon of Feb. 3, 1997, Prada’s co-chief executive officer Patrizio Bertelli, an avid sailor, had a conversation with yacht designer Gérman Frers, and made a pledge to partake in the 2000 edition of the America’s Cup challenge for the first time.

As the competition project unfurled, Prada’s America’s Cup shoes were becoming a hip product and gained even more steam as the Luna Rossa sailboat team wore them as part of their official uniforms.

More than a luxury alter ego to popular sports footwear styles, the sneakers resonated with a global audience, far beyond sailing enthusiasts, and became a pillar of the Linea Rossa collection. They were also a sign of the Italian luxury company’s efforts to build a lifestyle offering and expand its fashion lexicon.

In the early Aughts, everyone from BCBG girls in the Marais district in Paris and bourgeois guys in Milan and London to hip-hop stars in the U.S. were fans of these shoes. As it often happens with successful fashion items, they represented a sign of belonging to youth communities and countercultures.

Prada capitalized on their success by developing different iterations throughout the years. In addition to the low-top, lace-up version, they have been produced with Velcro closures and in a high-top style.

In the mid-2000s, Prada ticked yet another box, anticipating a trend that was to become popular among sportswear giants, offering online tools to personalize flagship models.

Select Prada stores offered made-to-order versions available in 16 colors and four materials. The now-closed unit on Milan’s Corso Venezia, for instance, had a dedicated corner where customers were led through the customization process, with detachable uppers applied with Velcro to the frame of the sneakers to provide an idea of the final result.

Although they never went out of production, the sneakers made a comeback in recent years, as the Linea Rossa collection returned front and center on the Prada runways. The revisited design — with a chunkier sole and tapered toe — debuted as part of the spring 2018 collection.

Amid a competitive luxury sneaker market, the Prada sneakers represent much more than just a regular fashion accessory.

In 2018, Marc Gandziri, a Paris-based Millennial, set up the @thecuplture Instagram account to celebrate the Prada sneakers and connect the global community of fans.

He describes the “Cups” as a global phenomenon. “I also see the Cups as a unifying shoe, as I have seen many times walking around Paris people of different social classes and ages rocking those Prada,” he offered.

As Prada and Adidas gear up to unveil the latest drop of their partnership on Dec. 9 — a new style that is inspired by the Cups — WWD talked to Gandziri about his obsession for them (he owns 12 pairs), their cultural meaning and global resonance.

WWD: When did you first discover Prada’s America’s Cup sneakers?

Marc Gandziri: In the early 2000s. I was about 15 years old and I used to see my cousin and the flyest OGs rocking them in his neighborhood in Paris. During my first trip in the U.S., to Roxbury, Boston, I started paying attention when — from [people on] the streets to famous rappers back then — they seemed to be everywhere. When I asked one of the folks I was staying with how much did the Prada America’s Cup cost, I knew right away that they were not just your regular pair of shoes. It told me straight up, if you had the Cups on your feet, then you were in big baller status.

WWD:  Why did they strike such a chord among the younger generations in the late Nineties and early Aughts?

M.G.: This pair was the beginning of luxury sportswear. Back in the day, these sneakers were a status symbol, if you had these sneakers you knew about fashion and ‘were somebody.’ Wearing the Cups was a way to command respect and prove a refined taste. Those sneakers were a social icon which would reflect a social rising, a way out of their social condition just by getting this product meant for wealthy people. For neighborhood kids, the America’s Cup was the first item that attracted them to the luxury fashion market.

WWD: From a design perspective, what made them stood out?

M.G.: They were futuristic, sophisticated, and the materials were not ordinary and maybe never seen before on a pair of sneakers. They were unique. A masterpiece; nothing more, nothing less.

WWD: In which way did you see these shoes influence the urban or street scene back then? Did they become a distinctive trait of a counterculture?

M.G.: Prada was one of the first luxury brands to launch a pair of sneakers. As a result, the OGs in the ‘hood were immediately attracted by the Cups, because Prada offered the perfect match between luxury and street fashion. When you see that icons in the fashion and music industries rock the Prada’s America’s Cup, then you understand that they are really influential. You may know that artists like [American rappers] Cam’ron, T.I. and Lil Wayne had a big impact on people and inspired them. In the early Aughts, we were all plugged on MTV Base and BET [Black Entertainment Television] every day looking for new trends. Those icons are mostly from the ‘hood, so they represent success for people who know where they came from. They are the culture, so the streets naturally acknowledged the America’s Cups.

The streets had appropriated luxury with their own codes so the designers couldn’t ignore what they were bringing to the fashion game, and now most of the luxury brands are actually sticking to the urban trends. As soon as celebrities and urban icons started wearing those sneakers, I thought it was the first sign of a counterculture movement.

WWD: Would you say that Prada anticipated the luxury sneakers trend? Was the brand really a precursor?

M.G.: I don’t think Prada was the very first brand: I think it did it better. At some point, some brands followed the path they paved. Prada was one of the first brands which designed a luxury sneaker that you could see on the streets or even at a wedding, [paired with] jeans or chic trousers.

WWD: Prada has most recently revisited the America’s Cups’ design. What do you think?

M.G.: Personally, I don’t feel the same affection for the new style: The new design which features bigger laces, metallic eyelets and a chunkier sole seems to be focused on targeting the youth demographic by making the shoe design sportier, or as some in the fashion industry might call it “more urban.” It’s a different shoe. The interest for the original style mounted because they were not meant for the streets. I mean they were supposed to be out of our reach and that simple fact made them more attractive. I find the new Cups less authentic. I feel like they made them for a new market and a new target. They look more accessible for new, younger generations.

WWD: Would you recommend Prada to bring back the original design?

M.G.: I think they are missing an opportunity to please a bunch of nostalgic fellas like me [laughs]. No, seriously I don’t think that the Prada policy consists in being conservative with their classic pieces, Prada is more about innovation and jumpstarting new trends.

Personally, I would like to see Prada bring back the original design, which is a timeless classic. Through my experience, I can simply tell that the demand for the original Cups is definitely here and if Prada does a #BringBackOurCups, it can only solidify its reputation as the pioneer of luxury sneakers.