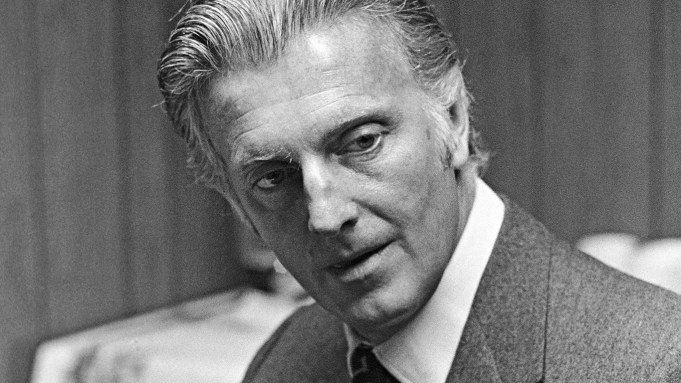 PARIS — The fashion world has lost a giant — figuratively and literally. Count Hubert James Marcel Taffin de Givenchy, the 6’6” French aristocrat who founded the house of Givenchy in 1952, died on Saturday at the age of 91, his family said on Monday.

He was best known to the general public as the creator of the film and personal wardrobes of his longtime muse, Audrey Hepburn, in movies including “Breakfast at Tiffany’s” and “Funny Face.” The actress also inspired his first perfume, L’Interdit.

With his perfect manners and old-school discipline, Givenchy had a distinguished presence that colored the fashion industry for over fifty years. A consummate collector with an impeccable eye for objects as well as the interior decoration of houses, he leaves behind a fashion house that defined the very notions of refinement and elegance.

Under the ownership of luxury conglomerate LVMH Moët Hennessy Louis Vuitton since 1988, the house of Givenchy issued a statement paying homage to its founder, “a major personality of the world of French haute couture and a gentleman who symbolized Parisian chic and elegance for more than half a century.”

Givenchy championed the concept of separates with his first couture collection in 1952, and two years later became the first designer to launch a high-end ready-to-wear line, it noted.

“And he revolutionized international fashion with the timelessly stylish looks he created for Audrey Hepburn, his great friend and muse for over 40 years. His work remains as relevant today as it was then. He will be greatly missed,” the house said.

“He was among those designers who placed Paris firmly at the heart of world fashion post 1950 while creating a unique personality for his own fashion label. In both prestigious long dresses and daywear, Hubert de Givenchy has brought together two rare qualities: to be innovative and timeless,” Arnault said.

“Mine is one of the most beautiful professions in fashion: making others happy with an idea,” the couturier said last year at the opening of the “Hubert de Givenchy” exhibition at the Museum of Lace and Fashion in Calais.

“I am happy because I did the job I dreamt of as a child,” he said at a press conference, where he offered recollections about his professional and personal relationships with some of his prominent clients, as well as the lifelong object of his admiration and respect, Cristóbal Balenciaga.

Givenchy sold his label, Givenchy Couture Group, to LVMH in 1988 for $45 million after 36 years of independence. He remained head of creative design for seven years before retiring in 1995.

In the following years, the house saw a revolving door of designers: John Galliano, Alexander McQueen and Julien MacDonald. Riccardo Tisci took over the label in 2005, putting it back on the design map with his daring, Goth-tinged fashions during a stellar 12-year tenure.

“I am deeply saddened by the loss of a great man and artist I have had the honor to meet and get to know since my appointment at Givenchy,” Waight Keller said.

“Not only was he one of the most influential fashion figures of our time, whose legacy still influences modern-day dressing, but he also was one of the chicest most charming men I have ever met. The definition of a true gentleman, that will stay with me forever,” she added.

Givenchy is survived by his partner, Philippe Venet, his nieces and nephews, and their children. His family plans a private funeral and requested that in lieu of flowers, donations be made to UNICEF in his name.