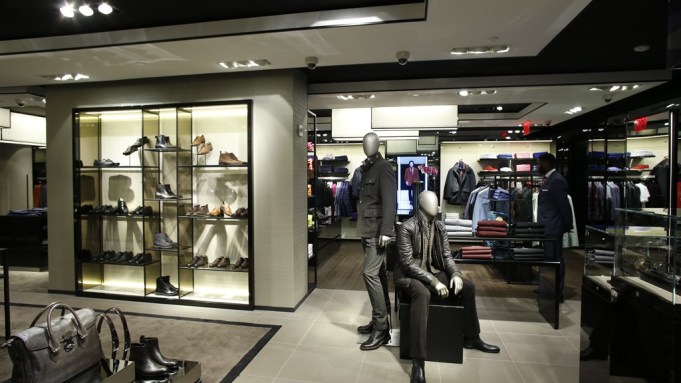 NEW YORK — With a multimedia extravaganza as the backdrop, Hugo Boss will take the wraps off its revamped U.S. flagship at The Shops at Columbus Circle here on Tuesday night.

The 10-year-old store, which now spans 15,000 square feet on three floors, is expected to be the largest — and most productive — in the country. The company took over the former Sephora spot on the third floor of the Time Warner Center at Columbus Circle here and created a women’s-only floor with its own entrance. The added space in the unit, which has been under construction for nine months, will also allow for the inclusion of the fashion-forward Hugo label for men and women.

“There’s 50 percent more square footage now, and this store is slated to be the number-one point of sale for Hugo Boss in America,” said Mark Brashear, chairman and chief executive officer for the Americas.

The shop is one of only 10 around the world to sport the new high-end flagship design featuring black steel grids with LED strips, fabric wall panels, silver-tinted glass, black leather furniture and mirrored surfaces that present a sophisticated yet modern feeling. The showpiece of the store is an “objet lumière” chandelier/lighting fixture that dangles over the staircase between the floors.

“This is the most elevated in terms of material choices,” he said. “It’s warm and rich, and the fitting rooms are larger. We continue to enhance the brand and reposition it at the luxury level. We’re very committed to that.”

The Columbus Circle store is one of four in New York City; the others are at 555 Broadway in SoHo, on 14th Street in the Meatpacking District and there’s a Hugo-only store on Greene Street in SoHo.

“Columbus Circle is one of the key global flagship locations that have been strategically positioned around the world,” Brashear said, adding that the store now has the space to dedicate to all of the company’s brands: Boss, Boss Orange, Boss Green and Hugo. Brashear said that the “avant-garde” Hugo label has had “the most significant growth” of any brand in the portfolio of late.

Hugo will be housed on the second floor, where men’s tailored clothing and furnishings are featured. Men’s sportswear is on the first floor of the store. The store will also serve as a flagship for the upper-end Boss tailored clothing label, he said, noting that the expanded selection is “already selling well.”

In the former space, the women’s collection had only a small dedicated area offering Boss and Boss Orange, but even so, Brashear revealed, the store was the top performer for women’s product. The addition of Hugo and the doubling of the square footage is expected to further boost sales, he said. Jason Wu signed on in June to design the company’s women’s wear collection, and his first designs will hit the store in fall 2014.

“We know that when we do dual-gender retail stores, it’s critical that both men and women feel comfortable shopping there,” he said.

The Shops of Columbus Circle is one of New York’s only indoor shopping centers and includes high-end restaurants, a theater, a hotel and a gym. Brashear said that over the past decade, the store has developed a strong business serving both locals and tourists. “We have a great customer base here and think it will be a home-run store.”

Brashear said that despite a rocky start to the year, Hugo Boss’ overall business has rebounded. In July, the Metzingen, Germany-based corporation reported double-digit gains in sales and earnings in the second quarter after a tough first quarter. Growth in the Americas was up 7 percent in the period. By brand, Hugo posted the strongest growth in the first six months, with sales up 11 percent. Boss sales rose 3 percent and Boss Green 4 percent, while Boss Orange registered a decline of 4 percent.

Brashear said sales in the third quarter have continued on their positive trend and the company is poised to “finish the year strong. And in the U.S., we’re experiencing solid growth on a mature business. We’re expecting high-single-digit growth. The sell-throughs are strong for fall in both wholesale and retail. And our online business is also healthy.”

Brashear said the company will open another two stores in the U.S. before the end of the year, in Oakbrook, Ill., and Burlington, Mass. A flagship in Washington is scheduled to open next year, and another Hugo store is slated to open in Santa Monica, Calif.

He said that 2013 marks a tipping point for the brand. It’s the first year that retail will account for more than 50 percent of sales. “We’re migrating the channel balance,” he said. “And that’s consistent with the global business.

“It’s a big evolution for us,” he continued. “We’re still committed to every channel, but we have more control over managing the elevation of the business in our own retail stores.”

To celebrate the Columbus Circle expansion and revamp, the company has commissioned a video installation by renowned artist Marco Brambilla. Entitled “Anthropocene,” the video presents a portrait of the geography within Central Park and in Columbus Circle. The soundtrack is a classical work by composer Camille Saint-Saens from “Carnival of the Animals.” It will be performed live by an orchestra from the Julliard School during the store’s opening-night party on Tuesday, and the video will be projected in high-definition on three suspended 30-by-40-foot screens in the glass atrium of the Time Warner Center. It will make its debut during the event and then play each night from 7 to 10 p.m. from Sept. 24 to 30. The video will be visible from both inside and outside the center. The company will be promoting the video installation in taxi cabs beginning on Friday and ask New Yorkers to Instagram how they perceive the film. A patchwork of these videos will be compiled on a microsite.

“Central Park plays an historic and vital role in all New Yorkers’ lives along with those who visit New York,” said Ward Simmons, vice president of marketing for Hugo Boss in the Americas. “Hugo Boss commissioned artist Marco Brambilla to create an art installation to give back to the city.”

Brashear said the art installation takes advantage of the store’s location at the entrance to Central Park and will be “good exposure” for the brand. It will also be featured in the store’s windows that face Columbus Circle. Additionally, 10 percent of the proceeds from all sales from Sept. 24 to 30 will be donated to the Central Park Conservancy.