The newest fragrance, launching in January, is the 20th anniversary of the Hugo fragrance brand at Procter & Gamble Prestige. 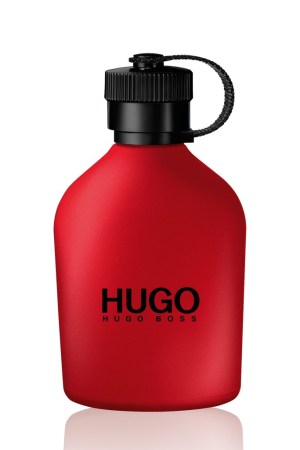 Hugo is turning 20 and seeing red — a color at the soul and center of the brand’s identity, and on the label of every suit.

Hugo Red, the newest fragrance, is set to launch in January, the 20th anniversary of the Hugo fragrance brand at Procter & Gamble Prestige.

Inspired by the dual nature of metal, and how it transforms from chilly solidity to molten fluidity under pressure, Hugo Red aims to bypass the “top note, heart note, base note” structure of most traditional scents. It starts with a punch of grapefruit and rhubarb, then transitions to contrasting cedarwood and hot amber notes.  “What is innovative about this is that it is a two-phase fragrance, and you have this almost extreme freshness followed by the beautiful warmth,” said Will Andrews of P&G’s Fragrance Creation Team.

The new fragrance’s packaging sports a sultry look — Hugo’s water-flask bottle has been coated with thermochromic paint in bright red. The sensitive coating reacts to touch; fingers and hands leave prints and traces, albeit fleeting. “You leave your mark on the bottle, like leaving your mark on the world,” Andrews noted.

The fragrance’s key ad visual and campaign also play on the color red, and feature actor-musician-entrepreneur Jared Leto, who is now the face off all three scents in the Hugo stable, including 1995’s Hugo Man and 2011’s Hugo Just Different. In director Jonas Åkerlund’s clip for Hugo Red, Leto is on the move, not pausing for the crimson traffic lights, which shatter in the wake of his intense stride. In this world, red means go — Hugo.

Leto, a multitasker, is nonstop, with three Internet start-ups, an album in the works with his band Thirty Seconds to Mars, a new documentary about the band’s battle with their record label and a role in the in-production film “Dallas Buyer’s Club,” which shows how he drastically reduced his weight this fall to play an AIDS patient.

The fragrance franchise has been expanding. Last year’s debut of Hugo Just Different created a halo effect, boosting sales of the original Hugo Man along with it, said Gerd von Podewils, who oversaw the project from the P&G Prestige side. In January, he will move to the fashion side as senior vice president, global communications at Hugo Boss.

“[Just Different] has received many prestigious awards, and has doubled the total sales of Hugo fragrances,” he said. Describing Hugo Red as the mark of a new chapter for the brand, von Podewils anticipated another strong performance for the new scent on the block but declined to give exact figures. However, industry sources estimate Hugo Red could deliver first-year retail sales close to $120 million.

Jan Loewen, license director at Hugo Boss, said, “The brand is growing like hell — fragrance is doing very well, and not only Just Different but also Hugo.”