The store is located in a new building on Omotesando. 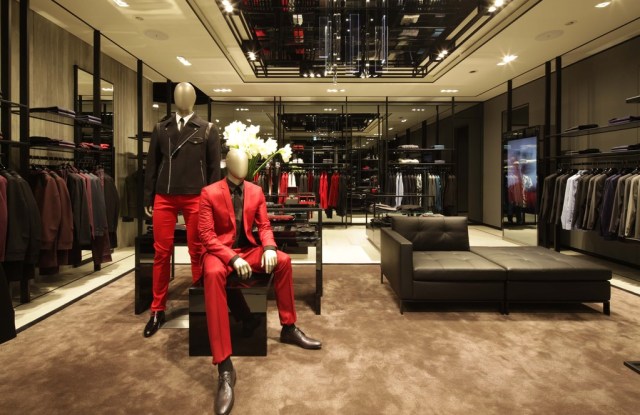 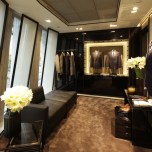 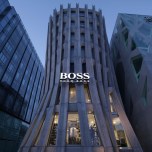 TOKYO — Hugo Boss will open a new flagship store in Tokyo on Friday in a striking new building on the fashionable avenue of Omotesando. Its neighbors will include Emporio Armani, Coach and Tod’s.

“This opportunity came up with a complete new store, new building and new design. The most important is the street, the shopping location, but then we also look at, what can we do here, what can we be here,” said Claus-Dietrich Lahrs, chief executive officer of Hugo Boss.

“So we saw the building, we saw the architecture, we saw the opportunity to have a multi-layer presentation of product, and we thought OK, that’s what we have to do. Because it has a very, very visible position on the street, and we always wanted to be here,” he added.

Lahrs said the company had been looking for a suitable store space in Omotesando for four years. Its other freestanding store in Tokyo is in the upscale Roppongi Hills complex, and what will be its largest store in Japan is planned for the middle of next year in Osaka.

The executive said Hugo Boss is also looking for opportunities to open additional freestanding stores in Tokyo in the coming years. The company currently operates about 60 points of sale across the country, most of which are in department stores.

The Omotesando store will carry the men’s wear collections of the Boss and Hugo lines, and will encompass a total retail space of 3,617 square feet. The third floor will be used as a private VIP room, something that is quite rare for Hugo Boss.

“We normally don’t entertain,” Lahrs said. “Why do we do it here? Because we think that Japanese consumers are interested in a special VIP experience, especially when you talk about made-to-measure, when you talk about trying on a sophisticated suit of superior quality. So this is something which was important to us in order to understand what it means to give a superior experience to customers who do have time to spend with us, but also to understand what the brand is about.”

The building that houses the store was designed by Japanese architect Norihiko Dan. It features a rounded front of concrete columns, resembling a teepee from certain angles. The interior of the store is decorated with black furniture and shelving, fabric wall panels and large, plush carpets. The staircase leading to the basement level is bordered by a graphite-tinted, floor-to-ceiling mirror.

Lahrs said that Hugo Boss has been seeing very good momentum in Japan since the middle of last year. While the company doesn’t release sales breakdowns by country, he said Japan is seeing double-digit growth, and he doesn’t see this as a blip, but rather as something he expects to continue.

“Since certain things in Japan changed, it seems the consumer gained — after a long, long moment of insecurity — confidence. And this confidence-building moment is ongoing. It’s something which is very reassuring to us because we always wanted to find a moment to strengthen our position in Japan,” Lahrs said.

“It is, together with Korea, the most sophisticated, the most demanding, but also the most challenging market in Asia. And to be in Japan is, according to what we think about Japan, a must. We are now building on an existing network of stores, predominately in department stores, and now step by step our own stores, in order to get even closer to the consumer we see in this country,” he said.